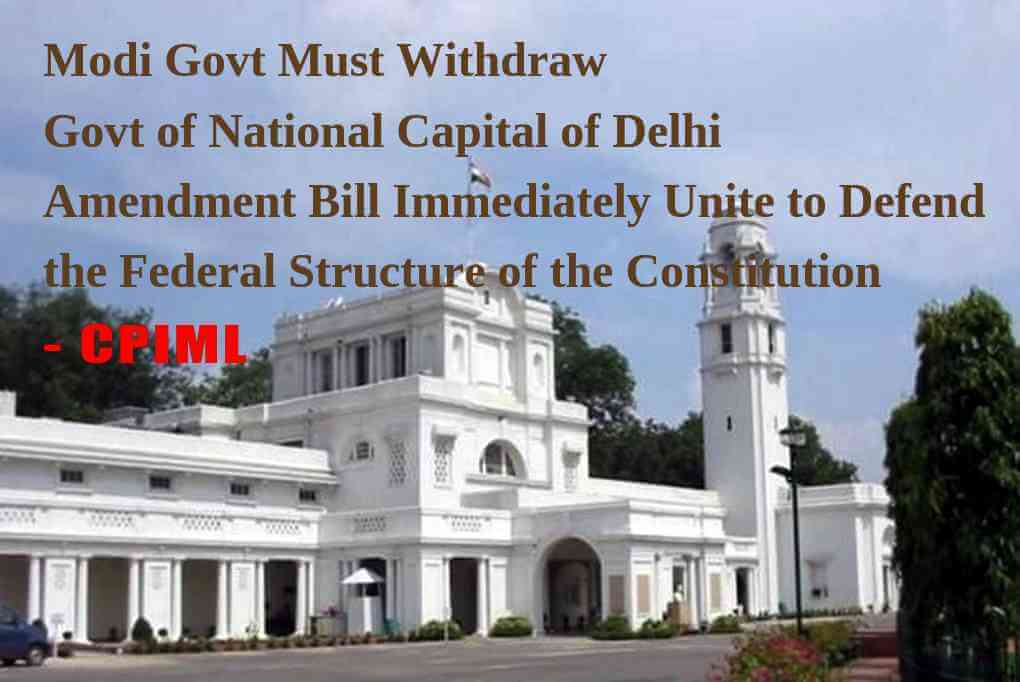 The CPIML in Delhi staunchly opposes the Government of National Capital of Delhi (Amendment) Bill 2021 introduced by the Modi Govt in the ongoing Parliament session. The said amendment seeks to define the 'government' as the Lieutenant Governor (LG) and requires every executive decision of the elected government of Delhi and laws enacted by the Assembly to be approved by the LG. In effect it seeks to take away all power from the elected Govt. of Delhi and hand it over to the LG thus reducing the govt and the assembly to ornamental bodies. This is a serious attack on the federal structure which will rest all powers with the Union Govt and undermine the elected govt.

The amendment if passed will be in direct violation of two Supreme Court judgements of 2018 and 2019. The decisions by a constitutional bench of the Court clearly ruled that other than the areas of police, public order and land all decision making power lie with the Govt. of Delhi. Instead of giving Delhi full statehood which was in the election manifesto of the BJP the Modi Govt. is trying to curtail the powers of the Govt of Delhi. PM Modi keeps harping on 'cooperative federalism' but wants to turn Delhi into a vassal of the Central Govt.

This is not the first instance of Modi Govt's attack on the Federal structure of the Constitution let us recall the passage of GST, misuse of the Governor's office to topple state governments and the completely unconstitutional abrogation of Article 370, which was done without consulting the people of J&K.

It was unfortunate that the AAP which heads the Delhi Govt supported the unconstitutional abrogation of Art 370. This support only legitimised BJP's attack on the Federal structure of our Constitution. This has now come back to bite the AAP itself whose Govt in Delhi will be reduced to a cipher if the Bill is passed. We hope the AAP will learn from this episode and reflect on the past instances where it has supported the BJP’s violations of the Constitution.

The CPIML Delhi State Committee calls upon the all political parties and citizens of Delhi to oppose the proposed the amendment bill and demand that it be withdrawn. Delhi should be given full statehood and the BJP Govt at the center must respect the federal spirit of the Constitution and stop trampling on the rights of the elected Govt of Delhi.