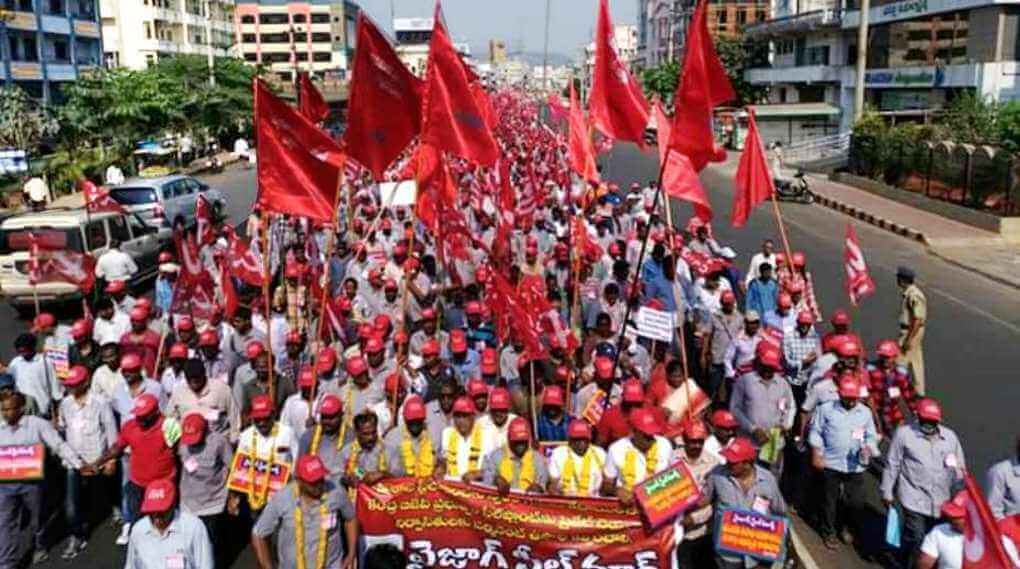 There is strong opposition to the central government's decision to privatize the Vizag Steel Plant and anger amidst the plant employees as well as the families whose lands were acquired for the plant, who have been sitting in dharna at the main gate of the plant for the last 35 days. Officers of the plant are also participating in the dharna along with workers. All central trade unions and 22 labour organizations are fully supporting this struggle, and the families whose lands had been acquired are demanding either regular jobs or return of their lands.

On 19 March a team of leaders of Centre of Steel Workers (CSW, affiliated to AICCTU) operating in Bhilai Steel Plant went to Vizag on 18th March 2021 and expressed deep solidarity with the movement of workmen of Vizag Steel Plant and displaced farmers against privatization Rashtriya Ispat Nigam Limited. There is a continuous sit-in demonstration and mass rallies by the workmen and the displaced farmers against the decision of privatization by Modi govt.

The Vizag Steel Plant is built on 24,000 acres of land. About 16,000 regular workmen and officers and 20,000 contract workmen are employed in continuous regular nature of work. So far, it is highly painful to know, about 8000 displaced people have not been given jobs as promised. 600 acres of the plant was given to POSCO, but has been held up due to rigorous protests. All unions and organizations are unitedly fighting against the privatization. There was a strong anger among the people against the Modi led BJP government .

The AICCTU has demanded that the privatization of the Vizag steel plant should be stopped immediately and approximately 8000 displaced farmer families should be given permanent jobs in the plant.