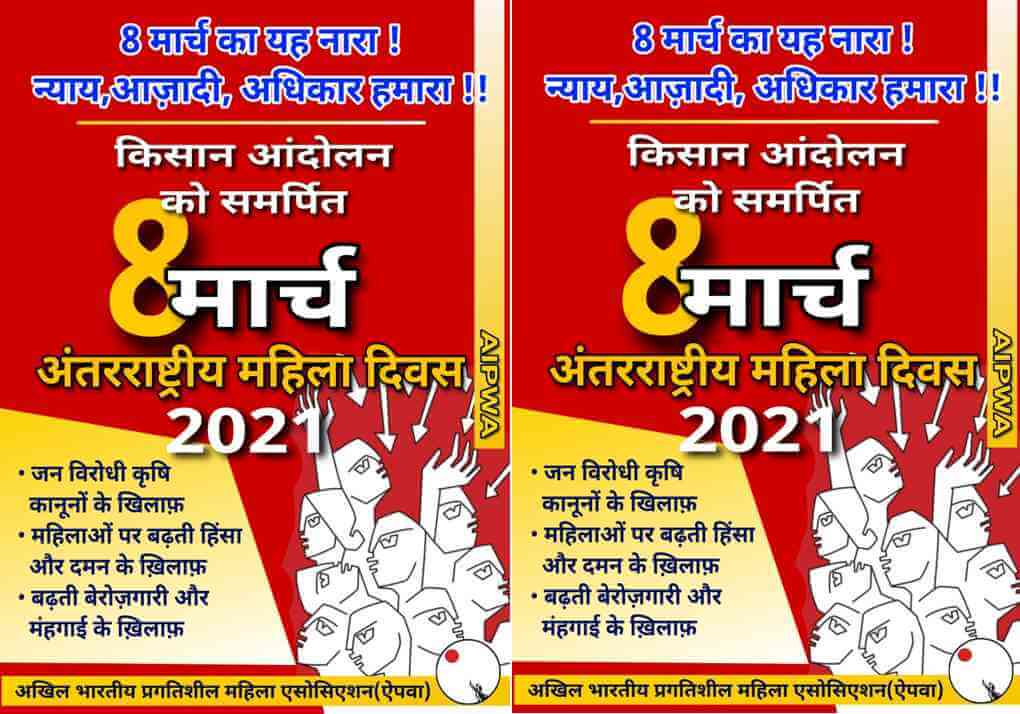 8 March is observed as International Women's Day all over the world. We are aware of the history of Women's Day. It was decided at the communist women's international conference in 1910 to celebrate women's day to strengthen the struggle for lesser hours of work (8 hours work shift), safe and oppression-free workplace in factories, and women's right to vote. Thus women's day became the symbol for the struggle for women's economic rights, social dignity and political justice. From then till today women across the world have fought and won many struggles. But today after 110 days these hard-won rights are in danger and women everywhere are fighting to save their rights.

Speaking of our own country:

Women workers are fighting against the labour laws passed by the Modi government. Scheme workers are fighting for worker-status and minimum wages. Women farmers are fighting on the Delhi borders against the 3 farm laws. These laws made for the benefit of Ambani, Adani and big capitalists are a testimony to enslavement of farmers. These laws will also gradually end rations for the poor and the Public Distribution System. That is why these laws are a huge attack against the interests of poor women. Big corporates will have a monopoly over foodgrains and prices will undergo a huge hike, thus affecting the kitchen-budget of middleclass women. Therefore the demand for repeal of these farm laws is not only in the interest of women farmers but of common women across the country.

Women today are distressed by spiralling prices of petrol-diesel and cooking gas and are protesting against privatization and demanding curbs on skyrocketing prices.

Women in Self Help Groups and women who take small loans from micro-finance companies are demanding loan waivers, reduction of interest rates, and other relief measures. it should be remembered that the government gave relief to capitalists during the Lockdown and also in the Budget, but not to these needy micro-borrowers.

BJP-ruled states are openly defending rapists. Hathras and Unnao type incidents are being perpetrated repeatedly in Uttar Pradesh, which is why women are demanding the Yogi government's resignation.

Citizens' movements dissenting from the Modi government are being attacked, and anti-CAA-NRC and anti-farm laws women protesters are being persecuted. A large number of women and girls have been thrown into jail or are facing false cases for telling the truth and protesting against unjust government policies. Some years ago Gauri Lankesh was murdered for opposing the communal policies of the BJP.

Therefore, let us tell the government on 8 March this year that we do not need empty sermons and speeches on women's equality; the government must respect our equality and freedom and stop crushing our rights.

Let us salute all the women struggling for rights in our country, especially our sister farmers camped on the Delhi borders, and make their voice reverberate across the entire country.