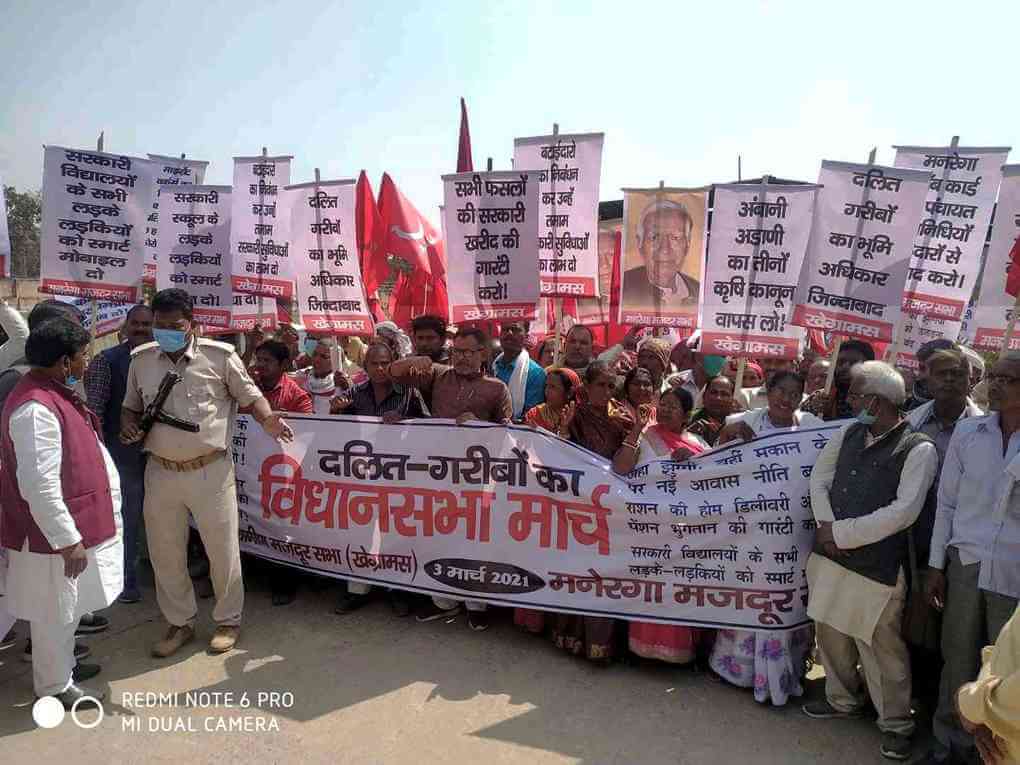 AIARLA and MNREGA Mazdoor Sabha organised a march in front of the Bihar Assembly on 3 March. The issues of housing for dalits, poor, workers and migrant workers, land, wages, ration, pension, education and health were raised through the march. The demand is for a new housing policy for construction of houses for the poor in the same place where their hutments are located.

There are more than 50 lakh poor families in Bihar who do not have ownership rights over the land on which they are settled. After independence the PP Act was passed in 1948 through which Basgeet Parcha provision for the poor was made for providing homestead lands. In the current situation an integrated housing law for urban and rural areas needs to be passed.

The government must guarantee monthly ration and pension and also give smart phones to government school students so that they can join mainstream education. There is rampant loot in the PM Awas Yojana. Aged persons, disabled persons and widows have not received pension for several months. The government is running away from arranging the 'home delivery rations' announced by them.

Dhirendra Jha, General Secretary of AIARLA said that when CPIML MLAs raise the issue of housing for dalits and poor in the Assembly, the Chief Minister bursts into anger. This is because it reminds him of his own crime of shelving the Land Reform Commission recommendations and running away from his promise of 5 decimal land for the landless. This government which thinks nothing of cutting down thousands of centenarian trees happily evicts the poor in the name of environment protection. AIARLA's 'rehabilitate the poor' movement is run on the basis of policies to protect housing for the poor as well as conserve rivers and ponds. We are the Andolanjivis for 'settle the poor and protect water bodies', he said. The greatest danger to rivers and ponds is from the land mafia protected by ruling powers, as can be understood in Darbhanga-Madhubani which have the highest number of ponds. Our demand is that maps of ponds and rivers based on the survey done by the British should be made public and the loot rampant in the Jal Nal Hariyali project should be probed by an expert environment organization.