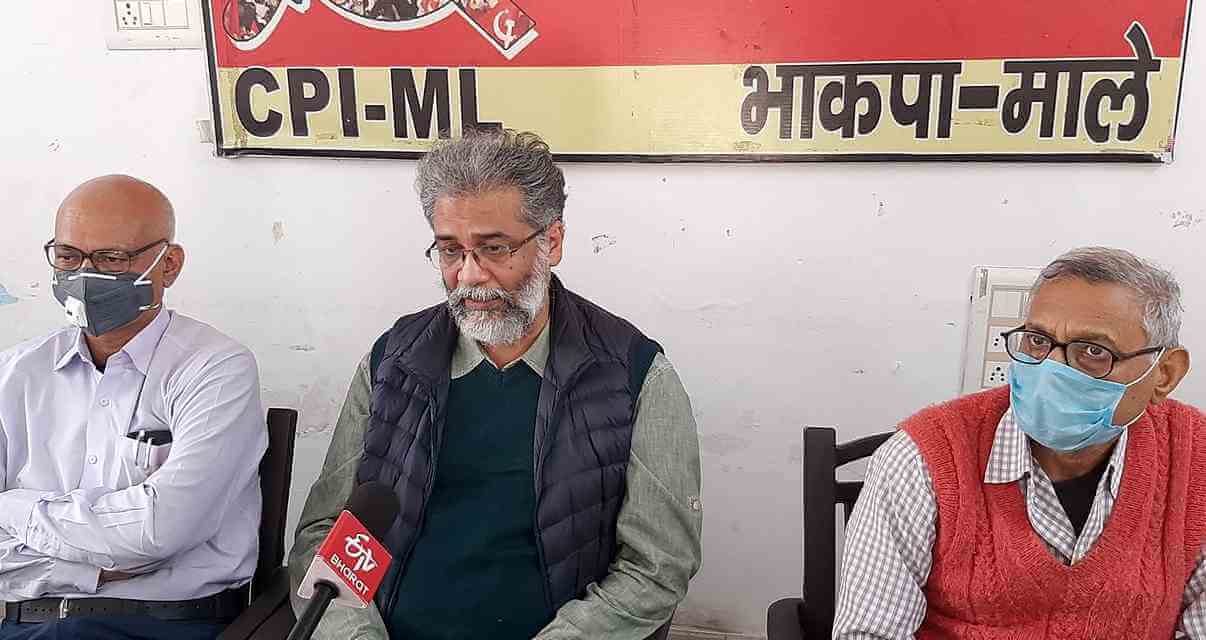 Addressing a press conference in Patna on 24 February, CPIML General Secretary Dipankar Bhattacharya said that Bihar Chief Minister Nitish Kumar is running away from discussing people's issues. If he claims to be different from BJP his politics should also look different. But we are seeing today that autocracy in Bihar is developing on the same lines as the Modi government. New buildings for Parliament are being constructed from Delhi to Bihar but democracy is being carved hollow from inside. Whether it is the diktat to restrict social media or the order not to give government jobs to those who participate in protests, these things show that Nitish Kumar has started speaking a tyrant's language, whereas he is himself a product of a student movement. His attitude to democracy is the same as that of the Modi government. What difference remains between the two of them now?

The ongoing movement against the three farm laws has now become extensive. The Modi government is shedding crocodile tears for small farmers, but they should tell the people what rights they have provided for small-poor-sharecropper farmers. Substantially, the benefit from PM Kisan Samman is available to owners of land up to 5 acres. Small farmers and sharecroppers do not fall in this category. The majority of farmers are not getting this amount.

Currently the country's glorious legacy of farmers' movements is coming to the fore. Kisan leaders Sir Chhotu Ram in Haryana, Bhagat Singh's uncle Ajit Singh in Punjab and Swami Sahajananda Saraswati in Bihar are our source of inspiration. Massive kisan panchayats are being organized across the country. In Bihar also we have decided to organize a kisan conference on 11 March at Bihta. The price and procurement of paddy and other crops is the least in Bihar. The paddy business here is entirely in the hands of middlemen. CPIML has decided to organize kisan yatras across Bihar from 11 to 15 March. A Vidhan Sabha march has been planned for 18 March.

Recently three more huge scams have been unearthed in Bihar which is already known for institutionalized corruption. These 3 scams are related to quarantine, Covid and elections respectively. With the exposure of the scam in the name of Covid in several Districts including Jamui, it is becoming clear that such scams cannot be perpetrated without high level political protection. This is a shameful scam where 30 RT-PCR tests have been shown on a single number and the person whose mobile number has been given says that he has never been tested.

According to reports received so far, huge scams during the election have come to light in at least 6 Districts. The hard-earned money of the people has been looted in the name of masks, sanitizers etc. Patna is in the 10th place in this scam. According to one report, when 60 paramilitary force companies came into the District during the 2019 Lok Sabha election Rs 2.30 crores were spent on them. But in 2020 the expenditure was shown as Rs 42 crores for 215 companies. The number of companies increased threefold but the expenditure increased 21 times. A bus number was shown on the bill, but it was later found that the number was not that of any bus but was a bike number. Like the 'srijan' scam, these scams are also not possible without political protection. CPIML demanded that the government should bring out a white paper on this.

The rising graph of crime in Bihar and the fact that more than 60% in the Cabinet are tainted Ministers is a matter of grave concern. It is astounding that the government that boasts of 'sushasan' (good governance) has 18 Ministers with serious charges against them. Clearly the government's claim of zero tolerance for crime, corruption and communalism is totally meaningless.