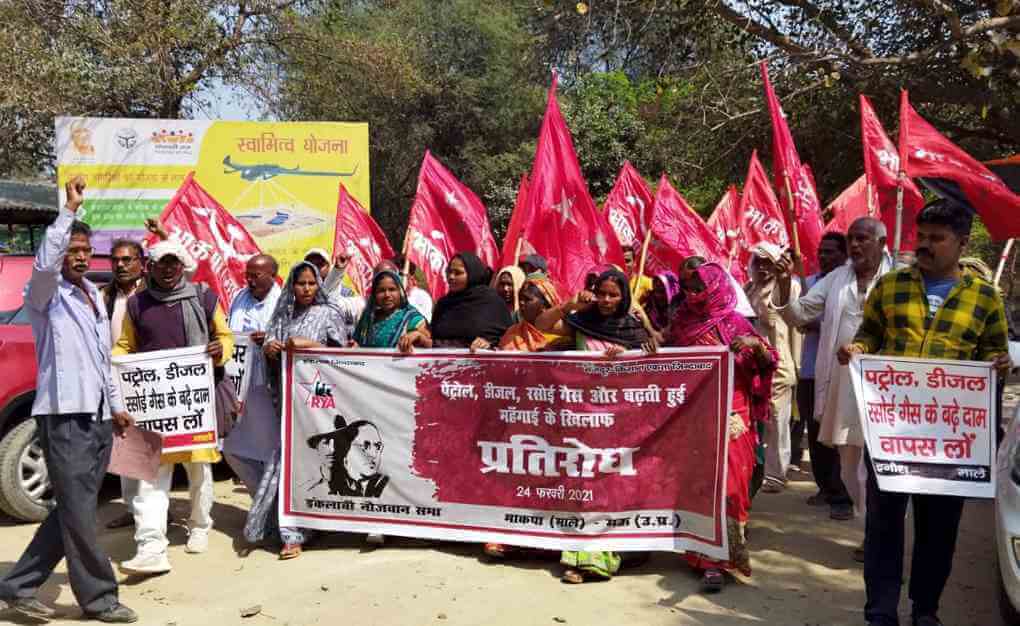 CPIML organized protests across Uttar Pradesh against spiralling prices, hike in petrol-diesel prices, and the Yogi government's Budget. Addressing the protest in Banaras State Secretary Sudhakar Yadav said that the Modi government has burdened the common people by hiking petrol-diesel prices exorbitantly. The Yogi government Budget makes no arrangement for the poor in MNREGA, education or health. The entire Budget is dedicated to corporate companies.

The protest in Lucknow was attended by CPIML, CPI, CPM and Forward Bloc and a memorandum was submitted to the President. Protests, effigy burnings of Modi and the UP Budget, and rallies against petrol-diesel price hike were also organized at Mathura, Sonbhadra, Azamgarh, Lakhimpur Kheeri, Sitapur, Jaunpur, Allahabad, Mau, Ghazipur, Maharajganj, Faizabad, Chandauli and other Districts. Memorandums were submitted to the President via the protests at various Districts. Kisan Mahasabha, AIARLA, AISA, RYA activists actively participated in the protests.

The Modi government is dealing blow upon cruel blow of inflation on the people of the country already struggling under the burden of Lockdown. The hiked prices of petrol, diesel and cooking gas have gone beyond the tolerance of the common people. The government must immediately constrain companies to roll back the prices, and take full control of essential items like petroleum products and gas cylinders. The above statements were made by CPIML leaders during a protest and effigy burning of PM Modi against petrol-diesel price hike in Giridih on 1 March.

Party leaders Rajesh Kumar Yadav, Rajesh Sinha, Priti Bhaskar and other leaders led the protest where they said that the government has forgotten that the people elected the Modi government to get relief from inflation and rising prices. But the government which promised Achchhe Din has become a nightmare for the people.