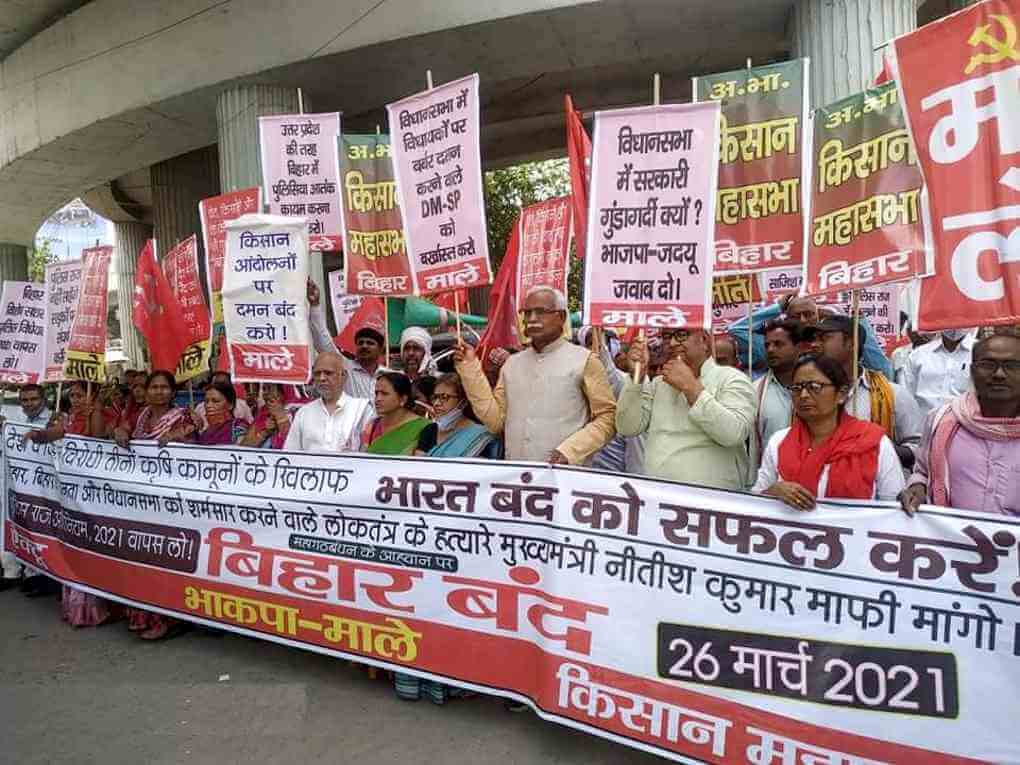 Bharat Bandh was organized on 26 March 2021 across the country.

The people’s mandate against three farm laws of Modi Government and draconian police raj of Nitish government became evident from the early hours of the morning with the unprecedented success of the Bharat Bandh on 26 March. The bandh called by the Sanyukta Kisan Morcha in Delhi, was supported in Bihar by the Mahagathbandhan parties who also gave a bandh call against the brutal beating up of MLAs inside the Bihar Assembly and to demand an apology from Chief Minister Nitish Kumar to the people of Bihar for this shameful murder of democracy.

The Bandh was successful in Bhind city in Madhya Pradesh. Sanyukt Kisan Morcha affiliated organizations All India Kisan Mahasabha and Kisan Sabha, as well as AICCTU, CITU and youth organizations submitted a memorandum, addressed to the President, to the Collector Bhind. The memorandum included demands for repeal of the 3 black farm laws, withdrawal of Electricity Amendment Bill 2020, legal status for MSP, release of arrested farmers and withdrawal of all cases slapped on protesting farmers.

Protest marches and meetings for the Bharat Bandh on 26 March were organized at Lucknow, Ballia, Mau, Ghazipur, Lakhimpur Kheeri, Prayagraj, Chandauli, Varanasi, Sonbhadra, Jalaun, Moradabad, Mathura, Mirzapur, Devaria and other Districts. CPIML and AIKM activists who came out on the streets for the Bharat Bandh at Sikandarpur in Ballia District, Uttar Pradesh were arrested by the police and detained in the Thana. CPIML has condemned the arrests and said this is an undemocratic action by the Yogi government.

AIKM and AIKMS jointly organized the Bharat Bandh at Gunupur in Rayagada, Odisha. The Bandh was also successful in Palamu and Daltonganj in Jharkhand. A protest was organized on 26 March for the Bharat Bandh by AICCTU and CITU outside Kurla Station in Mumbai. Protests and meetings were also organized in Ahmedabad, Gujarat and Gwalior, Madhya Pradesh.

CPIML has congratulated the people for supporting the farmers' struggle and making the Bharat Bandh a historic success. The Modi government must bow to the farmers' demands and repeal the 3 black farm laws.

CPIML activists took to the streets from early morning. Rail traffic was obstructed in Darbhanga and Jehanabad.

CPIML, All India Kisan Mahasabha, AICCTU and AIARLA activists played an active and important role in the bandh which is also to demand repeal of the farm laws, end to privatization, and repeal of the 4 labour codes.

During the Bihar Bandh CPIML activists blocked the Saharsa-Jainagar Janaki Express in Darbhanga and raised slogans for hours. This chakka jam was done at the Laheriaserai railway station, led by CPIML State Standing Committee member Abhishek Kumar, Devendra Kumar and other leaders. The Laheriaserai-Rosada road was jammed at Mirzapur-Kauahi Check. Trains on the Gaya-Patna line were blocked at Jehanabad.

Chakka jam was organized near Durga Mandir in Agiaon, Bhojpur. CPIML and AISA leaders led the blockade at NH 12 in Narayanpur. The Ara-Chhapra highway in Koilvar Block was jammed, led by leaders from Koilvar and Badhara Blocks.

The bandh was widely effective in Sahar and Gadahani also. CPIML and RJD activists jointly led the blockade of the Ara-Sasaram highway here. CPIML District Secretary Shrinivas Sharma and other leaders led the blockade of Koka More in Jehanabad, obstructing traffic on the Patna-Gaya road. Hundreds of ML activists participated in the bandh and marched from Kako More into the city, after which the jammed the Arwal road.

Traffic was fully obstructed on the Islampur-Fatuha road at Hilsa in Nalanda. The Patna-Gaya road was also jammed from early morning at Ekangarserai. The Hilsa bandh was led by District Secretary Surendra Ram and other leaders while Pramod Yadav led the blockade at Ekangarserai. The effects of the bandh were to be seen extensively at Chandi also.

The bandh was extensively effective in Dumraon in Buxar, where hundreds of ML activists came out on the streets from early morning and jammed NH 120 led by District Secretary Naveen Kumar and others. Sonvarsha also witnessed effective implementation of the bandh. In Gaya District roads were blocked in Koch Block. Shops and institutes remained closed at Tikari. Rupauli in Purnea also saw effective implementation of the bandh. CPIML activists blocked traffic on the National Highway in Samastipur near Gandhi Checkpost in Tajpur.

The first use of the Police Raj Act was perpetrated inside the Bihar Assembly on 23 March 2021. Shattering all rules and traditions of the constitutional and parliamentary system, police and goons entered the Assembly, brutally beat up opposition MLAs and pushed them out, after which BJP-JDU passed the draconian law changing Bihar into a Police Raj.

Earlier, when the Assembly session commenced on 23 March the Opposition started protesting against the Police Raj Bill. The session was adjourned a few times due to opposition protests, and proceedings were obstructed throughout the day. At 5 pm before the session was to end, a large number of RAF police personnel were called inside the Assembly on the orders of the Speaker and the government. Marshals were of course already present. The Bihar DGP, Patna SSP and DM jointly oversaw the beating, kicking, fisticuffing of MLAs as they were pushed and dragged out of the Assembly. The SSP and DM were themselves among those who did the brutal beating. The entire Assembly was filled with police personnel and the Police Raj Act was passed in the complete absence of the Opposition. Journalists were also beaten up. Leader of CPIML legislative party Comrade Mahboob Alam's arm was twisted and wrenched. Comrade Sudama Prasad was pushed and shoved and he fell down the stairs, causing a serious finger injury. A CPIM MLA was so badly beaten up that he lost consciousness. A woman MLA's sari was pulled off. Some of those who perpetrated the beating up were in civilian clothes, probably BJP goons.

CPIML MLAs attended the session wearing black bands and 24 March observed across the State as Dhikkar Diwas (Day of Shame).

Left parties declared support to the Bharat Bandh called by the Sanyukt Kisan Morcha to demand of the repeal of three black farm laws. The farmers' movement has now spread to all parts of the country. The

Left leaders in Bihar also demanded withdrawal of the Bihar Special Armed Police Bill, terming it a draconian Bill intended to change Bihar into a Police Raj. The Nitish government in Bihar is consistently crushing all struggles. The Left leaders strongly condemned the lathi charge on 23 March against RJD cadres marching to the Vidhan Sabha on the issue of employment and appealed to the justice-loving people of Bihar to give full support to the Bharat Bandh on 26 March.

CPIML said on 25 March that Nitish Kumar must apologize to the people of Bihar for shaming the Bihar Assembly, democracy and the people of the state. The bandh on 26 March in Bihar has been called jointly by Mahagathbandhan parties against the brutal police repression on MLAs inside the Assembly and against the BJP-JDU attempts to demoralise the Opposition.

The CPIML has said that this Police Raj Bill has been forcibly passed in the Assembly in the same way that the farm laws were passed in Parliament and the ground prepared to snatch away farmers' lands.

If the Opposition has objections to or reservations about any Bill, the democratic tradition is to hold extensive debate and discussion on it. But to pass the Bill and make it a law through police force and violence is to turn democracy into an ugly and cruel joke. CPIML has also demanded strict action against the Patna DM and SP.

CPIML Bihar State Secretary Kunal has said that the DGP's statement on 25 March 2021 regarding the brutal police atrocity on Opposition MLAs inside the Assembly is condemnable. He questioned whether the DGP is unaware that even police action has to abide by certain rules and regulations. Today when there is countrywide and even worldwide condemnation of the police atrocity on a democratic institution, the DGP has stated that if the Assembly Speaker gives permission action may be taken against police personnel who used excessive force.

The entire world has witnessed that this cowardly action was perpetrated under the directions of the DGP, DM and SP and the people's elected representatives were beaten, kicked and fisticuffed. Moreover, non-police personnel also entered the Assembly and brutally beat up MLAs. Video footages clearly show that the police crossed all limits on the say-so of the DM and the signal given by the SP. Even women MLAs were not spared. The DGP should apologize to the people of Bihar. The police did not obey any rules or regulations and actually showed a preview of the Police Raj that is to come. The people of Bihar are carefully watching and noting this heinous crime perpetrated by the police, the Chief Minister of Bihar, and the Speaker of the Assembly and the act of turning Bihar into the graveyard of democracy. The anger of the people evinced in the Bihar Bandh on 26 March

Farmers organisations burnt the Holi of the copies of three Farm Laws at the protest sites on Delhi borders and pledged to continue agitation till all three laws are repealed and MSP is legally guaranteed.

CPIML in Uttar Pradesh and other states too burnt copies of the farm laws on 28 March on the occasion of Holika Dahan. The party state unit said that the Modi government's 3 farm laws spell destruction of agriculture and death warrant for farmers.

Photo of Other States