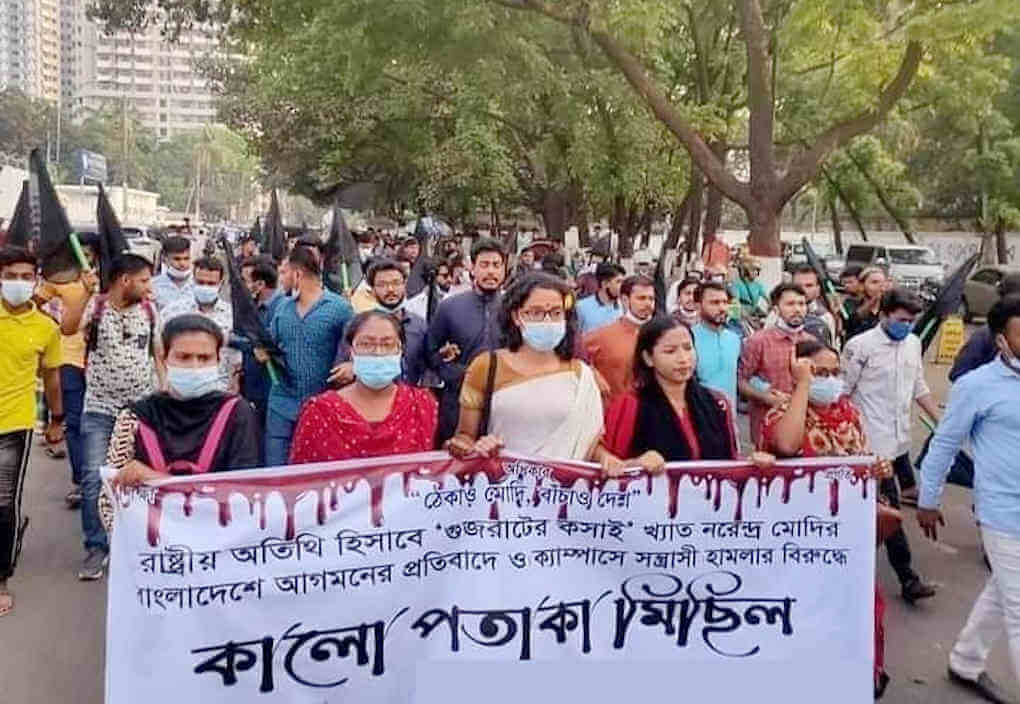 The Golden Jubilee of the independence of Bangladesh was meant to be an occasion of celebration. Unfortunately, in the wake of Narendra Modi’s visit to Bangladesh, the country has been caught in a trail of deaths, bloodshed, repression and violence. Given India’s role in the liberation of Bangladesh, it was perhaps natural for Bangladesh to invite the Indian Prime Minister on this occasion. But then India now has Narendra Modi as the Prime Minister and it is perfectly understandable why large sections of Bangladesh society have been extremely uncomfortable with Modi’s visit, that too on this kind of an occasion. The protests in Bangladesh were quite expected.

The autocratic government of Bangladesh and organisations sponsored by or allied with the ruling party tried to suppress the protests and attacked the protesters. As a reaction to Modi’s visit and this repression unleashed by the Hasina government, some organisations have also attacked Hindus and their institutions in Bangladesh. This must be condemned unequivocally. The Hindus in Bangladesh have nothing to do with either the Modi government and the communal politics of RSS-BJP or the repressive measures of the Hasina government. We hope the common people of Bangladesh who wish communal harmony and peace will prevail over this fundamentalist violence and not let it escalate and vitiate the environment on the solemn occasion of the golden jubilee of independence.

It will be wrong to conflate the anti-Modi protests in Bangladesh with any generalised anti-India sentiment. Modi is certainly not India and the protests against Modi are as universal as protests against Trump or other autocratic rulers in today’s world. It is Modi’s infamous track record as Gujarat CM and now as India’s PM which has been fuelling these protests worldwide ever since the 2002 Gujarat genocide. Till his ascent to power at the Centre in 2014, several countries in the world used to deny him visa. Even now protests greet him on almost all his foreign visits and large sections of the Indian diaspora participate in these protests. Within India Modi has to face protests in several states especially whenever he ventures beyond the northern and western parts of the country. It is common to see ‘Modi Go Back’ trend on Twitter in several languages.

In India, Modi’s Bangladesh visit attracted attention primarily because of his claim to have been arrested for participating in a satyagraha in 1971 for Bangladesh’s freedom. It appeared as though Modi had gone to Bangladesh to celebrate the golden jubilee of his first satyagraha and arrest. While most people disbelieved his claim as yet another typical Modi bluff, many people dug up records to verify that the Bharatiya Jan Sangh, the predecessor of the BJP, had indeed organised a satyagraha campaign from 1 to 12 August which had culminated in a rally in Delhi. Modi may well have taken part in this satyagraha as a young Jan Sangh activist, even though what he calls arrest may well have been just a customary ‘courting of arrest’.

The real point that merits attention is the context of the Jan Sangh Satyagraha which coincided with the signing of India’s friendship treaty with the Soviet Union. This was a major departure from India’s erstwhile policy of non-alignment and was a crucial step to secure diplomatic and military support for the Bangladesh liberation war and India’s eventual direct intervention. The RSS-BJS campaign opposed this treaty, saw this as delay on India’s part to accord recognition to Bangladesh and declare war on Pakistan. The course prescribed by RSS would have meant walking straight into the American trap and weakening the cause of Bangladesh. The RSS clearly had no ideological affinity with the secular, progressive, socialist orientation of the Bangladesh liberation war.

For Narendra Modi what perhaps mattered most was the fact that his Bangladesh visit coincided with the elections in West Bengal and Assam, the Indian provinces bordering Bangladesh. His Bangladesh itinerary included visits to the Jesoreswari Kali temple in Satkhira and Orakandi Thakurbari in Gopalganj district, the holiest shrine of the Matua community and the birthplace of the Matua movement’s founder Harichand Thakur. He was accompanied by the BJP MP from the Matua community Shantanu Thakur and a delegation of the Matua Mahasangh from West Bengal and following his visit to the Orakandi shrine, Modi made specific announcements about the Matua community both in Bangladesh and West Bengal. This was a clear violation of the model code of conduct and a brazen misuse of a foreign visit with a view to influencing voters back home.

The Matua movement was an anti-caste movement that became popular among sections of dalits in undivided Bengal in the nineteenth century. Founded by Harichand Thakur and carried forward by his son Guruchand Thakur, the movement was quite akin, in terms of its focus on education, social equality and women’s rights, to the anti-caste movements initiated by Phule and Ambedkar in Maharashtra. After Partition, large sections of the Namasudra community, the core Dalit group following the Matua movement, migrated to West Bengal and founded a new centre called Thakurnagar in North 24 Parganas district. Today, the Sangh-BJP establishment tries to subvert the anti-caste egalitarian legacy of the Matua movement and fit it in its own ideological framework of social collaboration and Hindu supremacist nationalism. The anti-caste egalitarian origin or core of the movement is being sought to be overshadowed by playing up the post-Partition insecurities of the community and deceiving them on the issue of citizenship.

Among the bilateral issues and initiatives discussed during the visit, the two countries finalised a connecting road called ‘swadhinata sadak’ (freedom road) and a third train route between the two countries connecting Dhaka and New Jalpaiguri. There has however been no corresponding headway on the unresolved issue of water-sharing between the two neighbours. In an ironic twist of history, the two countries have resolved to observe December 6 as ‘Maitri Diwas’ (friendship/harmony day) in memory of December 6, 1971 when India had formally accorded recognition to Bangladesh as an independent republic. Twenty-one years later, it was December 6, 1992 which delivered the biggest blow to communal harmony within India and friendship between the two countries when the vandals of the Sangh brigade demolished the Babri Masjid in broad daylight displaying brazen contempt for India’s syncretic culture and the modern constitutional rule of law.

Modi’s Bangladesh visit has unleashed a new phase of unrest in Bangladesh with its ominous social and political implications for Bangladesh’s poll-bound neighbouring provinces in India, West Bengal and Assam. Peace- and democracy-loving people in both Bangladesh and India will have to show great restraint and maturity to deal with this dangerous aftermath of Modi’s politically loaded visit to Bangladesh.