Citizens Meet to Save Khudabakhsh Library 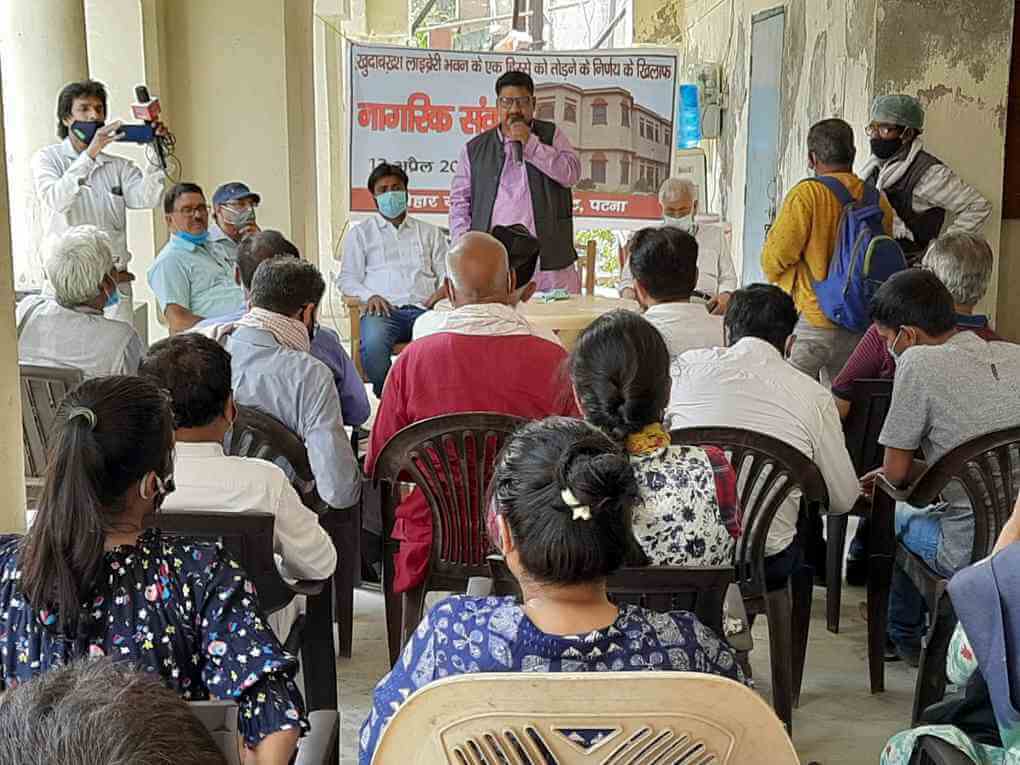 A meeting of Patna's citizens was organized on 13 April 2021 under the call given by Bihar Vidhan Sabha Library Committee Chairman and CPIML MLA Sudama Prasad against the demolition of part of Khudabakhsh Library for construction of the Kargil Chowk-NIT flyover. The meeting at the Young Men's Institute in Patna was attended by well-known doctors, teachers, cultural activists, journalists, students and lovers of education. Among those who spoke on the occasion and participated in the discussion were Library Committee member and Paliganj MLA Sandeep Saurabh, Prof Bharti S Kumar, Dr Satyajit Singh, Dr PNP Pal, and many student-youth leaders, advocates, journalists, social activists, educationists, AIPF leaders and student union leaders.

MLA Sandeep Saurabh read out the draft of the letter to be written to the Chief Minister with details of the historical relevance of the library. The letter would also point out the danger to other important buildings like BN College and many Patna University departments, whereas other alternatives for construction of the flyover bridge are available.

The citizens' meet agreed on getting the letter signed by citizens and submitted without delay to the Chief Minister so that damage to historic buildings could be prevented. Since the Khudabakhsh Library is Bihar's only international heritage building, it was also agreed to send a letter in this context to UNESCO. The meeting decided to launch an all-round campaign to save the library. Along with writing to Bihar Governor, Chief Minister and others, protest initiatives were also discussed. A Save Khudabakhsh Library Save Heritage Buildings Sangharsh Morcha was formed with AIPF leader Dr Kamlesh Sharma as Convener.

The Sangharsh Morcha decided that a human chain would be organized in front of Khudabakhsh Library on 15 April with full adherence to Covid rules, and appealed to people to participate in this program in large numbers.

In conclusion, Library Committee Chairman Sudama Prasad said that the committee has called a meeting on 16 April with bridge and road construction officials. Before a bulldozer can be taken to the library, the government will first have to bulldoze us citizens.