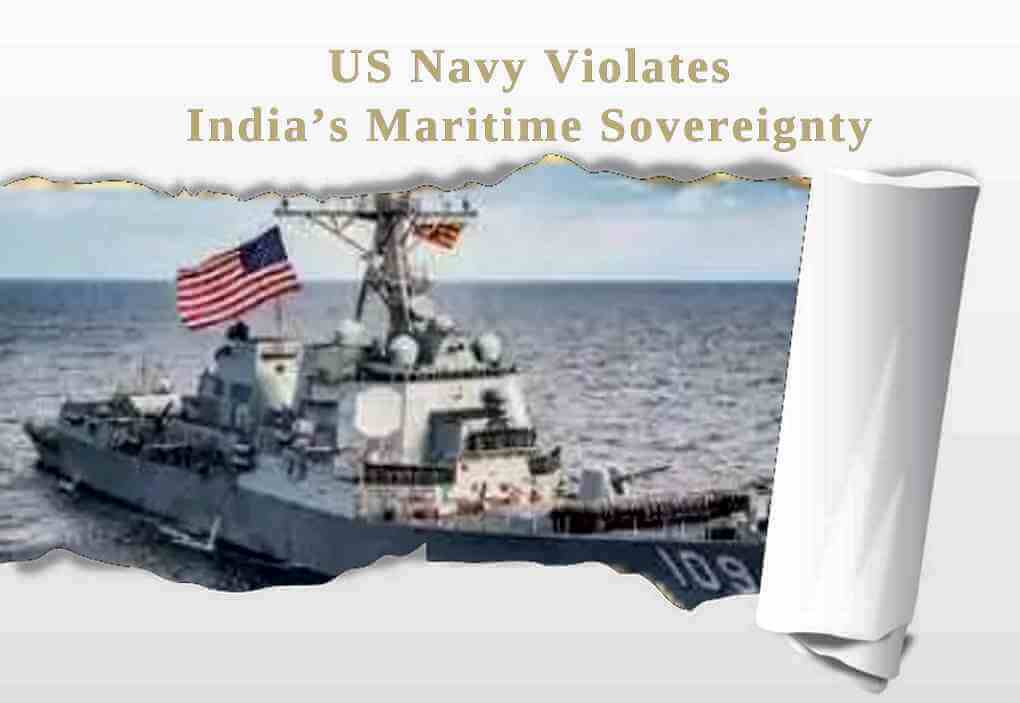 The US navy has openly stated that it has violated India’s (and Maldives’) maritime sovereignty, declaring in a statement “On April 7, 2021 (local time) USS John Paul Jones (DDG 53) asserted navigational rights and freedoms approximately 130 nautical miles west of the Lakshadweep Islands, inside India’s exclusive economic zone, without requesting India’s prior consent, consistent with international law. India requires prior consent for military exercises or maneuvers in its exclusive economic zone or continental shelf…”

In justification for these violations, it has asserted Freedom of Navigation Operation (FONOP), arguing that its actions are justified under international law. Such activities are however little else than bullying and an attempt to force the Indian govt into military subservience. This also points to the policy of surrendering Indian interests to Washington’s diktats that the Modi government has taken by joining the so-called Quad alliance with Japan and Australia. By conducting such operations without prior consent, Washington is signaling that it expects New Delhi to be a client state rather than an equal partner in such an alliance.

The Modi government has always projected a muscular foreign policy as its major strength and has sought votes on such a basis, while it has surrendered to such bullying by the US. On one hand BJP has accused all opposition and protestors of being backed by foreign adversaries. On the other hand, by amending the FCRA, BJP has made it easier for foreign contributions to flow unchecked into the party coffers. Thus it remains open to speculation if Washington is buying influence in the BJP and chipping away at India’s maritime rights.

Such violations are also a threat to India’s security as well as a threat to Indian fishing vessels that operate on waters where the US seeks to expand its influence. The Indian government needs to stand up to such acts of bullying and make the US navy apologize before it can claim to have ‘raised’ India’s global stature.