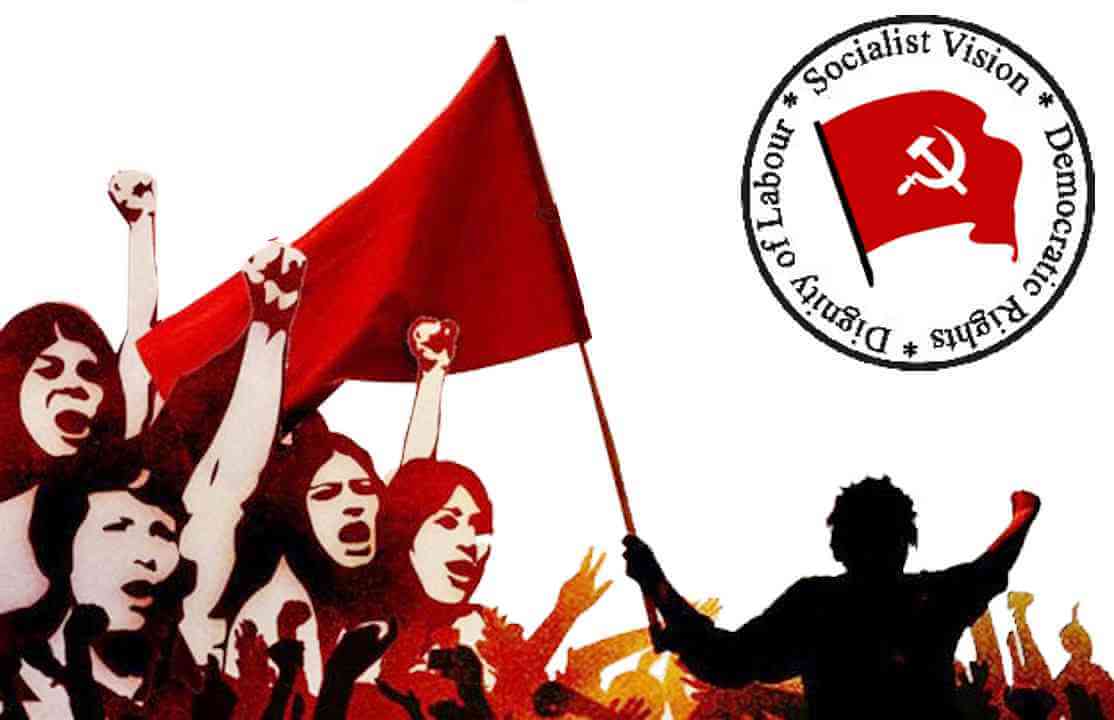 Assert May Day as the Day of Worker-Farmer Unity!
Intensify Struggles to Reclaim our Rights!
Overthrow the Modi led Company Raj!
Make Modi government responsible for the Covid devastation in the country!

We are commemorating May Day 2021 when the second wave of the pandemic is engulfing the entire country exposing the utter failures of Modi led BJP government. Lakhs congregated in the name of Kumbh at Haridwar. Thousands are being mobilised for Modi-Shah greedy election battle to win Bengal. The entire country is looking like a graveyard. People are dying for want of oxygen, medicines and hospital beds. It cannot be called a Covid death anymore because people are dying because of the Modi government’s failure to be prepared for the second wave. It is none else but the Modi government that is responsible for the cruel and inhuman deaths. But, Modi government is walking on the corpses to ensure greedy profits for corporate giants. Vaccine is being exported at the cost of lives of Indian people. Corporates are allowed to increase the prices of vaccine amidst piling dead bodies. It’s the responsibility of the government to provide free vaccines to all but people are being pushed at the altar of corporate profits. Innumerable deaths, ever increasing poverty and hunger, loss of wages and employment have become the norm. Modi is always on his “Mann ki Baat” and election rallies and not to be seen around in rectifying the systemic failure to address Covid related issues. Modi led BJP government should be held responsible for the Corona devastation in the country.

Even people in their own homes are not able to sustain themselves because of partial and limited Lockdown in various states. People are suffering from hunger and poverty.

We are commemorating May Day 2021 at a time of consistent battle between Modi-led corporate raj and the toiling masses. Each and every right of workers and the people are being snatched by the Modi regime in the name of Corona and the entire country is being gifted away to Ambanis and Adanis. The dark clouds of privatization, labour codes, farm laws and a heap of draconian laws that are destroying our constitution are hovering over our country and the working people. The country is yet again facing a devastating situation of re-establishment of Company Raj. But at the same time, the ever growing resistance and mass movements of toiling people and farmers are challenging these attacks and the energy emitted by these movements is piercing through these dark clouds of Modi-led destruction. Most notable among these movements is the ongoing five months-old, historical, relentless, determined farmers’ movement against farm laws. It has been successful in thwarting the implementation of these laws and has also created a powerful atmosphere and narration against privatization and corporate world. More importantly, these movements have further strengthened the voices of stopping and defeating the BJP.

In recent times, we have witnessed some more important movements and instances of determined resistance against privatization and corporatization in several PSUs and government sector establishments, notable being hugely successful strikes by employees of Banking sector and Insurance sector in the month of March, 2021, the resolute struggle against the privatization of Vizag Steel plant for more than two months by the employees and the local people, a successful ‘anti privatization Day’ on 15 March, Bharat Bandh on 26 March Last year, and one-day all-India strike by the working class amid the difficult and challenging situation arising out of Corona and lockdown on 26 Nov., which also saw the beginning of farmers’ movement.

For Modi led BJP government, privatization, 3 farm laws and 4 Labour codes actually constitute a comprehensive package to convert our country into “India Pvt. Ltd.” (like, Adani Railways) and to raise an army of slave labour to toil for it. This is a package to establish Company Raj in the country which has been showcased by Modi as “Aatmanirbhar Bharat” (self-reliant India). The entire property, natural resources of our country, i.e. every brick and piece of land, is being handed over to corporates through several clandestine means and methods like- Disinvestment, FDI, PPP, Merger, Commercial mining coupled with scores of pro-corporate amendments in laws related to tribes and forest and the land. The 3 farm laws are meant to hand over the entire agricultural land to corporates. But, this process of privatization cannot be completed without raising an army of slave labour. That is why 4 labour codes are passed to ensure the mountains of profits to corporate houses by pushing the labour into slavery – after all, Privatization without windfall profits, does not make sense. Very clearly, the working class of country is facing the most brutal attack since independence. Labour codes and ruthless privatization constitute two biggest attacks on the working class.

The 3 farm laws will not only destroy the peasantry, clear the way for takeover of agricultural land by Adanis and Ambanis, but will also lead to corporate take-over of food items, destroy the ration system and the food security which crores of unorganized workers and their families are dependent on; while the urgent need is to provide free ration to every unorganized worker in our country, which occupies one of top positions in the world in terms of hunger and malnutrition.

The govt. is preparing to implement soon the regime of 4 labour codes after doing away with all existing labour laws which were won after long struggles and sacrifices against the colonial British rulers. Modi and RSS are replacing rule of law with jungle laws; British colonial rulers with corporate rulers.

These codes will do away with entire regular/permanent workforce. In coming days, employment relations will only be marked by scores of “irregular” employment systems like contract, daily wage, badli, fixed term, etc. Such irregular system of employment is discovered only to deny wages, rights and benefits, applicability or implementation of any law, etc. Obviously, Modi’s claim of extending ‘rule of law’ to informal sector is nothing but a big hoax, a jumla.

Curbing the right to organize and the right to strike, legal sanction to 12 hour work-day, determining hours of a work-day at the whims and fancies of employers, freezing the minimum wage (starvation wages) at its lowest in the name of “floor wages”, institutionalization of ‘hire and fire’, arbitrary retrenchment, lay-off and closures, doing away with all hitherto operating welfare boards of unorganized workers, freeing the employers from the responsibility of social security and shifting it onto the shoulders of workers – all these attacks will be perpetrated through implementing these labour codes. While, at the same time, the toiling masses are already reeling under the impact of cruel lockdown as well as record-breaking unemployment and back-breaking inflation.

Modi govt. shamelessly continued with its designs of onslaughts on peoples’ rights and escalating repression even under the pretext of pandemic and lockdown. In the name of ‘converting crisis into opportunity’ people’s crisis is being converted into opportunity for Modi’s corporate friends. There is an all-round attack on citizens for even raising the voice of dissent and protest against Modi govt.’s policies. Human rights and social activists are being branded as anti-nationals and are sent to jails. The constitution, democracy and federal structure are being torn apart. The latest attacks are, designs of imposing Police Raj in Bihar along the lines of Yogi-led U.P. govt. by bringing in Bihar Special Armed Police Act 2021 by BJP-Nitish govt., an unprecedented act in the history of parliamentary system of police thrashing opposition MLAs right inside Assembly, and an act of paralysing the elected govt. of Delhi by according all essential powers to the Lt. Governor.

Privatization and snatching rights of people is not the only agenda of Modi-Sangh govt., rather it is just a part of its overall agenda of Hitlershahi and Hindu Rashtra. Communalism is interwoven in this agenda. While the country is being put on sale, communal hatred and poison is being spread among the working masses and communal mobilization is being undertaken to bury their real, essential issues.

It is high time and most favourable scenario too for the working class to take a plunge and fight with all its might against the attack in shoulder to shoulder with farmers and other sections of masses and to thwart the Modi govt.’s pro-corporate, anti-worker policy regime, its designs to establish Company Raj and to reclaim our rights.

The worst ever challenge, since the country’s independence, is looming large over the working class, the common people and the country under the Modi led BJP regime. Let us march ahead unitedly and convert this massive crisis into an opportunity for a determined resistance and movements.

Let us assert and observe the May Day 2021 as the Day of Worker-Farmer Unity.