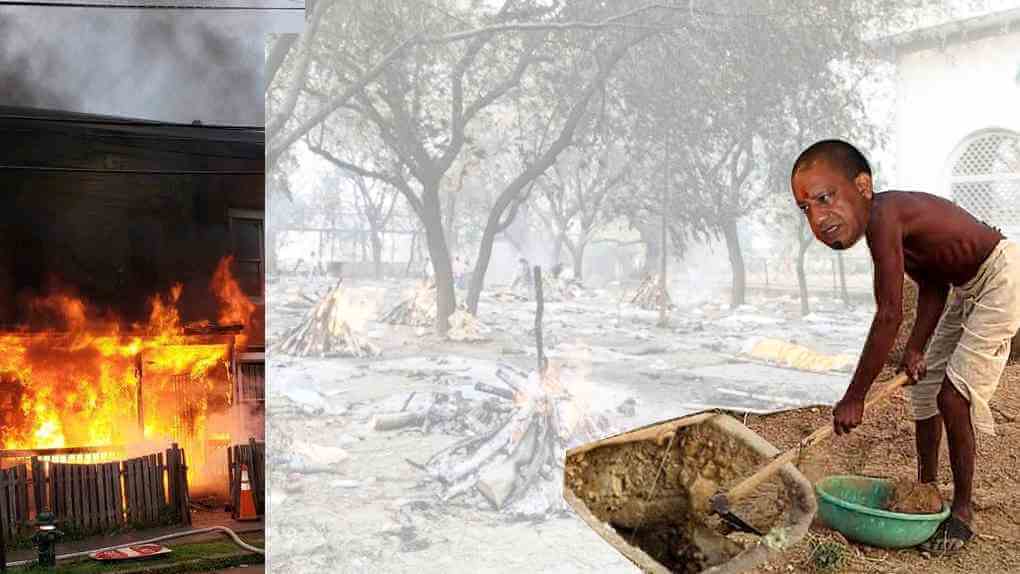 CPIML organized statewide protests across Uttar Pradesh on 25 April against the government's failure to curb Covid deaths. The protests were held between 12 noon and 1 pm at houses, party offices and work places while observing Covid protocol. Protesters held placards with slogans and demands, posted pictures and videos on social media, and memorandums were sent via email from many Districts to the government.

The main issues and demands raised through the protests were: Modi-Yogi governments’ accountability for deaths due to shortage of ambulances, beds, oxygen and ventilators; demand for guarantee of availability of ambulances, beds, ICUs, oxygen, ventilators, medicines and injections; demand to curb black-marketing of oxygen, Remdesivir and other life-saving drugs; free Covid treatment for all at government and private hospitals; increase Covid testing and ensure quick results; Covid treatment at District and Block level hospitals; free Covid vaccination for all; government should bear cost of vaccination and Covid treatment at private hospitals; ensure safe return of migrant workers and Rs 10000 per month subsistence allowance for 3 months and free rations for 6 months; generate work in MNREGA and provide work on similar lines for urban poor also.

The criminal negligence by the Modi-Yogi governments in handling the second wave of Covid is unforgivable. If they had used the last one year to arrange beds, oxygen etc, the current dance of death could have been avoided. In some hospitals there are ventilators but no technicians to operate them. The Yogi government learnt nothing from the horrific experience of oxygen shortage deaths at BRD Medical College in Gorakhpur. Uttar Pradesh has become Shamsan (Crematorium) Pradesh due to the humongous criminal negligence of Yogi-Modi. Yogi must take responsibility and resign from the post of Chief Minister.

The protests were held across Uttar Pradesh at Lucknow, Prayagraj, Banaras, Gorakhpur, Ghazipur, Azamgarh, Kanpur, Mathura, Sonbhadra, and other Districts. CPIML State Secretary Sudhakar Yadav said that scientists have warned that Corona infection will be even worse in the month of May and the government should course correct and give priority to saving human lives instead of winning votes and elections.

Digging the Well After Fire Had Started Raging

Chief Minister Yogi's order to start an oxygen plant in view of the huge number of Covid deaths in Lucknow and other parts of the State due to oxygen shortage is like starting to dig a well in order to douse a fire that is already raging.

By the time the said oxygen plant is ready, a great many more lives would be lost due to shortage of oxygen. The government pontificated for an entire year about social distancing and masks, but indulged in sheer negligence by not utilizing the one year's time to put any preparations in place. Scientists had warned of the possibility of a second wave but the government did nothing to make adequate life-saving arrangements like testing, treatment, ambulances, hospitals, beds, oxygen, ventilators, ICU, injections and vaccinations and wasted the precious period on unnecessary things instead.

As a result, there is no space even in crematoriums now. The government is very ready to blame the people for the spread of Covid and slap heavy fines for violations. But the question is, who will take responsibility for the criminal negligence in preparedness on the part of the government? Rampant loot is going on in the name of treatment. Huge black-marketing of Remdesivir and oxygen is going on. Common people who are Covid patients are running from pillar to post but unable to get proper treatment. Such a government, that leaves the people to fend for themselves in this crisis and die due to lack of beds, medicines and oxygen, has no right to remain in power.

The Yogi government has failed on all fronts due to its lack of foresight and has failed to curb the galloping number of Covid cases and deaths. In order to hide their failure, they are fudging statistics so that the people do not get the correct information. Government figures show only a very low number of deaths whereas burial grounds and crematoriums are overflowing with bodies that are Covid deaths. The government is even boarding over crematoriums to hide the truth.

CPIML said that for the BJP electioneering and religious events are more important than human lives, as is evident from the Bengal election to the UP Panchayat election to the Haridwar Mahakumbh. The height of insensitivity is being witnessed not only in the UP government but also in the top leadership of the BJP. The Prime Minister and Home Minister are busy with election rallies and road shows instead of handling the huge Covid crisis that is engulfing the country. The party that detests democracy is pretending to be the champion of democracy.