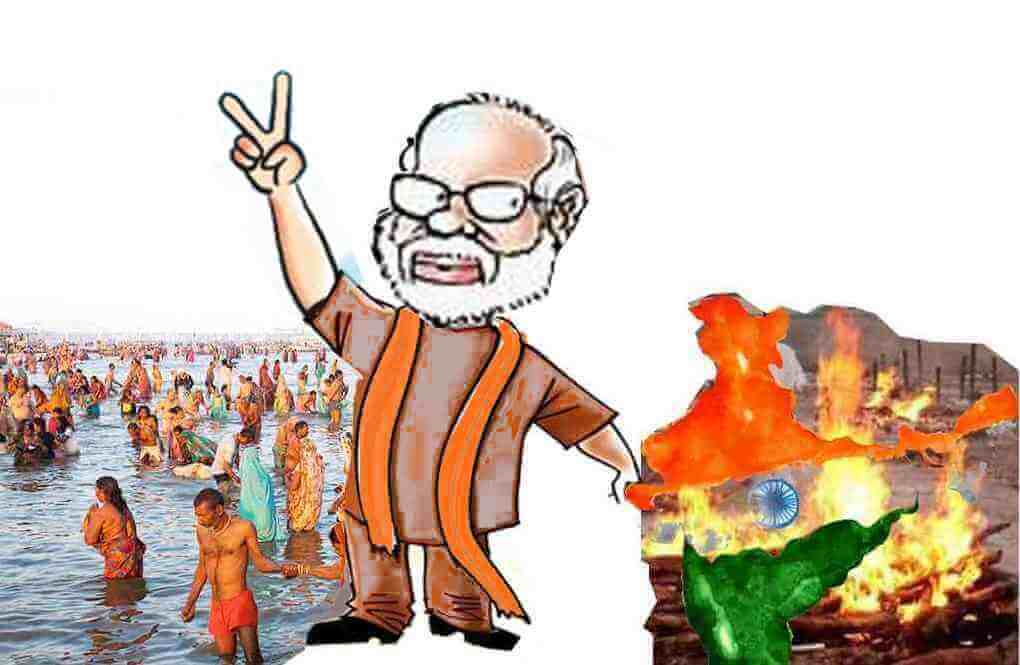 When the whole world was getting ready to deal with the second wave of Covid19 pandemic, the Modi government was congratulating itself for its 'spectacular success' in dealing with the first wave. In January, Modi told the World Economic Forum how India helped the world combat the coronavirus. In February, the BJP national leadership adopted a resolution hailing Modi's 'able, sensitive, committed and visionary leadership', 'introducing India to the world as a proud and victorious nation in the fight against Covid'. In early March, health minister Harsh Vardhan declared India had reached the 'end game' of Covid19 and asked for politics to be kept out of Covid19. The Prime Minister described India as the world's pharmacy.

With the declaration of elections, the Modi government turned into an election machine. Where there was no election, there was Kumbh Mela, intriguingly advanced by a year. But by the end of March Maharashtra started reporting a spike in Covid cases and then April hit us hard. By the middle of April we were adding a million new cases every four days. The death toll went past 2000 per day. Reports of shortage of hospital beds, oxygen supply and even cremation space started pouring in from more and more cities and states. The self-styled leader of the war on Covid is now being described by the international media as the epicentre of the epidemic, hurtling towards a viral apocalypse.

Many countries, including advanced capitalist countries like the US, Italy, France and UK found their healthcare systems overwhelmed by the outbreak of the pandemic. But once vaccines arrived on the scene, most countries have tackled the virus quite effectively by resorting to mass vaccination. India was lucky because of the low mortality rate which gave us time which could have been used to ramp up our health system. Indeed, in 2020 our health system was hardly tested, it was the lockdown-inflicted economic devastation and humanitarian crisis which marked India's Covid crisis in 2020. But the second wave has caught India virtually napping. In fact, even though, as Amit Malviya has confirmed, the Central government was warned of this second wave as early as January 2021, it continued to export oxygen and failed to boost its vaccination drive.

Worse still, even as signs of an exponential surge became all too evident, the government chose to ignore them. The Uttarakhand government and the sundry akharas went ahead with the Kumbh Mela bathing programme (even as late as 27 April, the 'shahi snan', presumably the last this year, still happened) and Narendra Modi and Amit Shah carried on with their mega rallies and road shows till the third week of April. The Election Commission compounded the health hazard with the unprecedented eight-phased election schedule, refusing to club the last three phases even as the Covid numbers escalated alarmingly in West Bengal. The Madras High Court has been absolutely spot on with its indictment of the EC, and a senior official of the Indian Medical Association has rightly called a spade a spade by dubbing Narendra Modi himself as a super spreader.

The government that lulled the country into lowering its guard and wasted crucial time and resources to undermine India's Covid-combating strategy is now busy protecting its image and prioritising corporate profits over saving lives. Social media platforms are being coerced to silence criticism, people complaining about Oxygen shortage in UP are being threatened with draconian measures like confiscation of property, and the media is being mobilised to target the opposition and blame the people. At the most an amorphous ‘system’ is being blamed to cover up for the utter failure of an absolutely irresponsible and incompetent regime that is taking away thousands of lives that could be saved if only we had a government that cares and functioned.

On a global level, in place of the deadly corporate profiteering we are witnessing, a patent-free people's vaccine is desperately needed and the WTO must immediately implement the TRIPS waiver on vaccines, and the US, UK and EU must stop blocking this. But while India has made this demand in global fora, ironically, the Modi government is actively facilitating some of the most shocking examples of this callous corporate profiteering at home. Instead of taking responsibility for universal free vaccination, the BJP is linking vaccines with votes and giving a free hand to vaccine producing companies to make ‘super profits’ and sell vaccines at arbitrary differential prices - at Rs 150 to the Centre while charging 400 and 600 Rs from state governments and 600-1,200 from private hospitals.

The criminal negligence and failure in the sphere of public health is once again being sought to be covered up by inflicting various modes and scales of lockdown without any compensatory measures for the people. Wiser from the experience of last year's lockdown, the people are much more alert and angry this time. While maintaining hygienic precautions, we must do our best to mobilise help for the suffering people. Our MLAs in Bihar and Jharkhand are getting a lot of public appreciation for their proactive role and dedicated public service. In several metros and district towns, comrades are running Covid care helplines. We should uphold this spirit and model of public service in all our areas of work. The centrality of public health to effective government policy and performance, and the contrast between the needs of a modern society and the Sangh-BJP framework of 'Hindu Rashtra', are being felt ever more acutely with every avoidable Covid death. The only way to mourn the dead is to hold the government accountable and continue to fight for progressive changes in public policy and a decisive transformation of the social and political environment in the country.