Democracy on Trial: Give a Fitting Rebuff to the BJP's Fascist Offensive 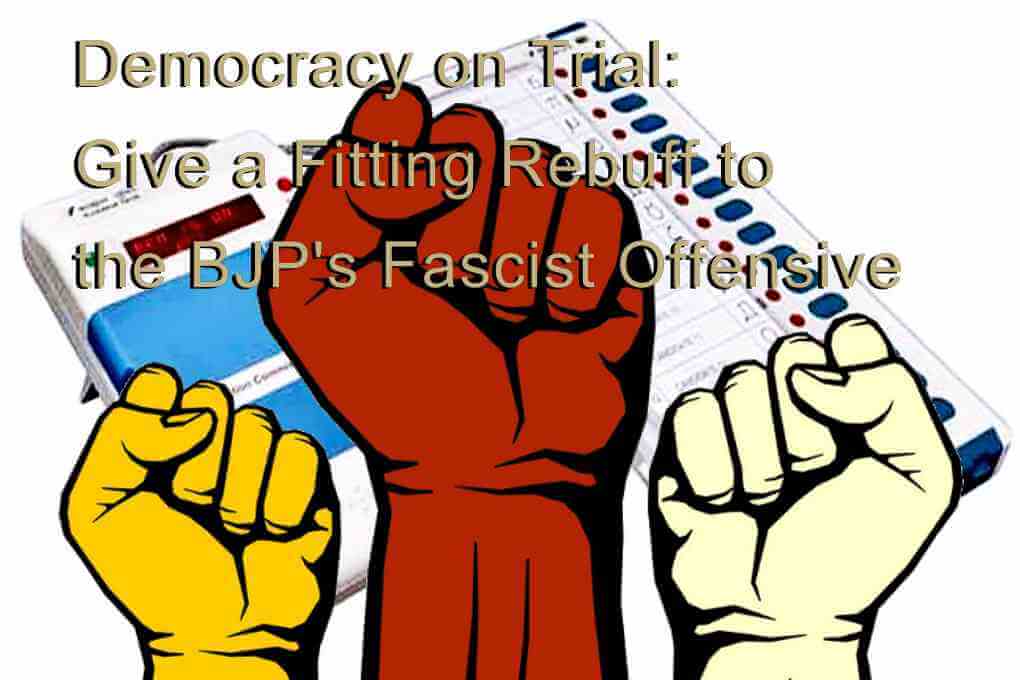 As the Assembly Elections in five states follow their schedule, several developments show a mirror to today’s most urgent political concerns.

On 31 March 2021, the Union Finance Ministry cut interest rates on various small savings schemes sharply by 40-110 basis points. Early the next morning, on April 1, Finance Minister Nirmala Sitharaman tweeted that the rates would remain the same and that “orders issued by oversight shall be withdrawn”. This U-turn was announced on April Fool’s Day, but the Modi regime could not fool anyone as to their motives in hurriedly reversing the rate-cut decision. Clearly, the Finance Ministry had been advised that the rate cut decision be postponed till after elections – since a decision delivering a major blow to small savings holders during Elections would be politically costly to the BJP. Nothing underlines the cynicism, dishonesty and incompetence of the Modi regime more than this episode.

Meanwhile, as has become commonplace during elections, an Assam BJP candidate’s car was found transporting a polled EVM! The Election Commission’s cock-and-bull story claiming that the polling party’s car had broken down, and that they had taken a lift in the next car without realising it belonged to the candidate, can convince no one. This EVM theft can only be compared to the booth capturing that used to happen with paper ballots in the past. In another Assam polling booth where there are 90 voters, 171 votes were cast. If EVM machines are just as susceptible to capture or rigging than paper ballots, why use them in the first place?

There is a pattern to the long trail of dubious episodes involving faulty, malfunctioning and stolen EVMs. In the vast majority of reported instances, the “faults” have benefited the BJP. The Election Commission has strenuously rejected the suggestion that EVM and VVPAT machines are susceptible to tampering, despite the fact that most countries the world over have rejected ballot machines precisely because they acknowledge this possibility. It is clear that regardless of the outcome of the elections, Indian voters must demand a return to paper ballots to ensure that their votes are secure.

All over India, including in the states where elections are underway, the BJP is aware that it is perceived as a party that has “sold everything, sold our assets.” Privatisation of public sector assets, plunder by crony corporations of people’s savings in public sector banks through unpaid loans that are written off, the attempted rate-cut in small savings, the farm laws that sell agriculture to the companies, the labour laws that are diluted to suit the employers, privatised education and healthcare as well as the worst unemployment in 40 years – all these are more the pro-corporate measures, anti-people measures, the effect of which people are experiencing and resisting.

Unable to answer people’s questions on these fronts, the BJP is resorting to its old staple in its election campaign – venomous anti-Muslim hate speech. In Assam, Amit Shah has asked voters to choose between “atma-nirbhar Assam and maulana-nirbhar Assam” (Assam that is self-reliant or Assam that is reliant on Muslim clerics). The reference is to the AIUDF, led by Badruddin Ajmal, that is a member of the opposition coalition. In West Bengal, the Prime Minister addressed the sitting Chief Minister in a highly offensive and misogynistic tone. BJP West Bengal President Dilip Ghosh told the CM that it went against “Indian culture” for her broken leg in its cast to be seen while she wore a sari, adding that she should wear shorts instead. Displaying the BJP’s trademark violence towards intellectuals and artistes, Dilip Ghosh declared that intellectuals are a social liability and also threatened film, theatre and music artistes who have been speaking up against the BJP: “If they don’t leave politics aside, I will take care of them. And, artistes know how I do it.” Such threats are especially disturbing in a state like West Bengal, long known for its vibrant and argumentative cultural sphere.

But by far the most toxic part of the BJP’s campaign has been its hate speech aimed at creating a Muslim-hating Hindu votebank that has, till now, never been a prominent feature of Bengal politics. In the Nandigram seat, the BJP candidate attacked his rival, the sitting Chief Minister, using terms to suggest that she is a Muslim who is an “aunt” to “infiltrators” and “Rohingyas”. A Union Minister campaigning in Bengal said the CM had belonged to the “Rohingya gotra (sub-caste)”. This campaign, using one of the world’s most oppressed refugees as a term of abuse, and suggesting that a candidate who is Muslim, or is a Hindu person who does not hate Muslims, does not deserve votes of Hindus. The Election Commission, as has become usual, has remained silent on this open, blatant hate speech.

But the communal hate speech by the BJP only reveals its bankruptcy and desperation. Modi’s pet media houses are working overtime to create an illusion of invincibility for the BJP. Helped by such media, the BJP is browbeating the electorate and declaring itself the inevitable victor even before votes have been cast! But as the Elections proceed, voters of all five states are calling their bluff. Fighting back in the face of the BJP’s vast funds (dubiously obtained through the shady electoral bonds scheme) and propaganda machinery, farmers and workers, women and young people, are succeeding in keeping people’s issues at the forefront and refusing to be influenced by hate speech.