Bihar Covid Crisis: Government Needs to Do Duty Instead of Harassing People 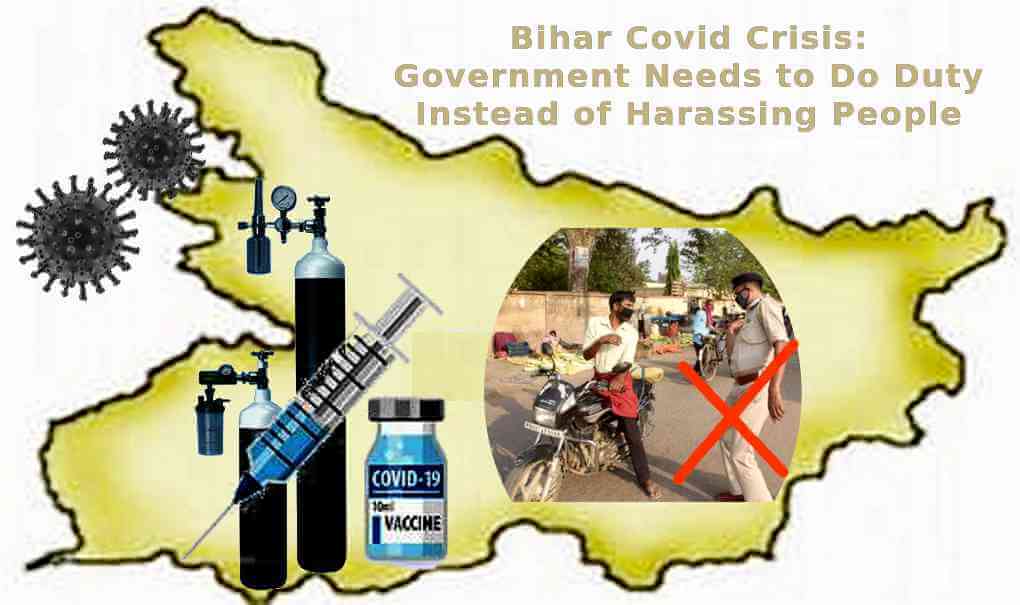 CPIML Bihar State Committee calls for Statewide Protest on 15 May

The CPIML Bihar State Committee held a meeting on 12 May and expressed its deep concern and pain over the current pandemic which is the biggest since Independence, the governments' failure to save lives on a priority basis, the Prime Minister's inhuman attitude and his consistently prioritising other things over people's lives.

In this hour of crisis, Prime Minister is busy spending Rs 20000 crores on the Central Vista project and making the nation listen to his 'Mann ki Baat'. The situation has come to such a pass that leave alone living a life of dignity, people are not even able to die with dignity. BJP had promised during the 2017 UP election that they would build crematoriums, but today people are constrained to throw the dead bodies of their loved ones into the Ganga. The vaccination process is also crawling along at snail's pace.

The health system in Bihar, already one of the weakest in the country, has collapsed fully in this emergency. As a result, both rich and poor are dying consistently and needlessly. Lack of timely oxygen and other facilities leaves no option except to die. Instead of improving the situation the Nitish government wants to show that Covid is coming under control by under-counting Covid cases. In this crisis when every single ambulance is crucial, the BJP MP Rajiv Pratap Rudi has hidden away ambulances and is using them to transport sand and liquor. What can be more inhuman than this?

The mismanagement of Bihar's health system is continuously pushing people to their deaths. Most dangerous of all is that the Covid infection is rapidly spreading in rural areas, but no awareness campaign and no vaccination drive is being organized. It has been proved beyond doubt that as long as an incompetent person like Mangal Pandey remains Health Minister there cannot be an iota of improvement in Bihar's health system. It is impossible to comprehend why Nitish Kumar insists on keeping such a useless person as Health Minister. People across the State today are angry with the incompetence of this Minister.

Covid has exposed the humongous failure of the State government machinery. This failed system is currently being run by the anti-people failure-duo rulers called Modi-Shah. This government which is selling the country and fiddling while the people die has no right to remain in power. We have, therefore, given the slogan, 'Desh-bechu adamkhor, Modi-Shah gaddi chhod' (Man-eaters who sell the country, get down from the seat of power).

The meeting took the decision to protest on 15 May from homes and offices while observing Covid protocols. The protest will demand a case to be registered and immediate arrest of BJP MP Rajiv Pratap Rudi and removal of Health Minister Mangal Pandey.

CPIML has appealed to the people of Bihar to come forward in this time of crisis, protest from their homes on 15 May, force the government to act, and help Covid victims as much as possible.

All CPIML MLAs have directed District administrations to arrange essential health equipment through their MLA funds. This should be done on a war footing so that the people can get necessary facilities on time.

The statement by BJP MP Rajiv Pratap Rudi, in which he says ambulances are not functioning for lack of drivers, only shows what a farce the so-called BJP-touted 'development' is. Is it really such a humongous task for the government to arrange a few drivers in these horrific pandemic times? Thousands of lakhs of youth are sitting unemployed, waiting for jobs. Drivers could have been appointed from among them. But people are dying and ambulances are being hidden away. It seems as if BJP Ministers and leaders are cooking up something fishy even in this crisis. This must be investigated.

CPIML Bihar State Secretary Kunal said on 11 May that the arrest of former MP Pappu Yadav is politically motivated. He asked the government to answer, is revenge being taken on Pappu Yadav for exposing BJP MP Rajiv Pratap Rudi's ambulance scam? Pinpointing Nitish Kumar, Comrade Kunal also asked, is this the way the Chief Minister of Bihar wishes to tackle the challenges of Covid? He further said that it is now proven beyond doubt that the government machinery has completely failed and it does not want the truth to come out. Those who are bringing to light the truth about Bihar's health system are being targeted.

The CPIML has on strongly condemned the arrest of Pappu Yadav and said this is an absolute shame during the pandemic. The government must stop hounding and punishing those who are helping patients.

CPIML leader Krishna Mohan strongly criticized the shaming and harassing of people who venture out for essentials by the police in the name of lockdown. The police and administration should behave sympathetically with the common people in these pandemic times, and help them instead of hounding them. CPIML demands the immediate release of Pappu Yadav.

CPIML Bihar State Secretary Kunal said on 5 May that Chief Minister Nitish Kumar has allocated District-wise responsibilities to Ministers but the Ministers' behaviour is very careless and negligent. They are neither present in their allotted areas, nor do they answer phone calls from people's representatives, doctors or common citizens. Their phones are either unreachable, or out of network area. The worst situation is with the Health Minister himself who has been made Bhojpur in-charge.

CM Nitish Kumar should direct his Ministers immediately to stop this irresponsible behaviour and understand their responsibilities in this hour of crisis. CPIML has demanded an information center should be set up in every District so that necessary information can be accessed immediately by the needy.

Kunal further said that Lockdown has been imposed once again in Bihar, under cover of which the police is beating up and harassing the common people. We demand that instead of beating up people the administration should concentrate on running an awareness campaign and making the people understand.

Meanwhile, CPIML MLA Sudama Prasad has once again written to the Chief Minister and demanded that immediate necessary medical equipments should be purchased for his Assembly constituency from his MLA fund quota. He has demanded the following equipments for Tarari constituency from his MLA fund: 100 oxygen cylinders; 50 oxygen flowmeters; 25 oximeters; 25 oxygen trollies; 200 oxygen masks; 50 beds; 100 bedsheets; 10 oxygen concentrators; 25000 masks; 100 nos. of good quality sanitizers; and 2 ambulances.

Other MLAs including Sandeep Saurabh (Paliganj) and Gopal Ravidas (Phulwari) are also writing to the Chief Minister with similar requests.

The CPIML has suggested postponing the Panchayat elections by 6 months in view of the ferocity of the pandemic, but the conspiracy to hand over Panchayats to the bureaucracy under this pretext will not be tolerated. There are reports that the Bihar government is considering bringing an ordinance to hand over the work of Panchayats to bureaucrats.

Comrade Kunal has said that such a move will be a totally anti-democratic act. Why does the government not bring an ordinance to extend the current term of Panchayats by 6 months? This has happened earlier also in the history of Bihar when terms of Panchayats have been extended under special circumstances. Moreover, it is people's representatives who can carry out relief campaigns properly among the common people, because they have a direct connect with the people.

He further said that despite repeated appeals to the Chief Minister there is no visible improvement in the health situation. Nothing can be done as long as Mangal Pandey is Health Minister. He has proved so incompetent that people at every level are enraged with him. The Health Minister does not even bother to attend meetings in the Districts where he has been made in-charge. We demand that Nitish Kumar should immediately take the health department into his own hands and take charge of bringing relief to the people on a war footing.

Hospitals not admitting Patients with O2 below 90: Covid Help Centre

The Covid Help Centre run by CPIML-AISA-RYA at Chhajubagh in Patna is receiving many complaints that hospitals are refusing to admit patients with oxygen saturation levels below 90. The situation is getting more and more serious because of this.

Patna City Secretary of CPIML Abhuday said that the oxygen availability crisis continues despite claims to the contrary by the government. State Committee member Samta Rai said that reports are coming from many hospitals, including IGIMS and the recently opened Covid hospital in Patliputra Complex, that patients with oxygen saturation levels below 90 are not being admitted, whereas it is these patients whose condition is serious and who need admission. The Covid Help Centre demands the immediate intervention of the administration in this matter.

Meanwhile, AISA leader Divyam said that we will ensure to the best of our ability that food is supplied to all those who are needy. He appealed to citizens to come forward in this hour of crisis and cooperate with the Covid Help Centre in all possible ways so that these tough challenges can be faced.