PM Modi Must Take Responsibility For Covid-19 Genocide And Resign 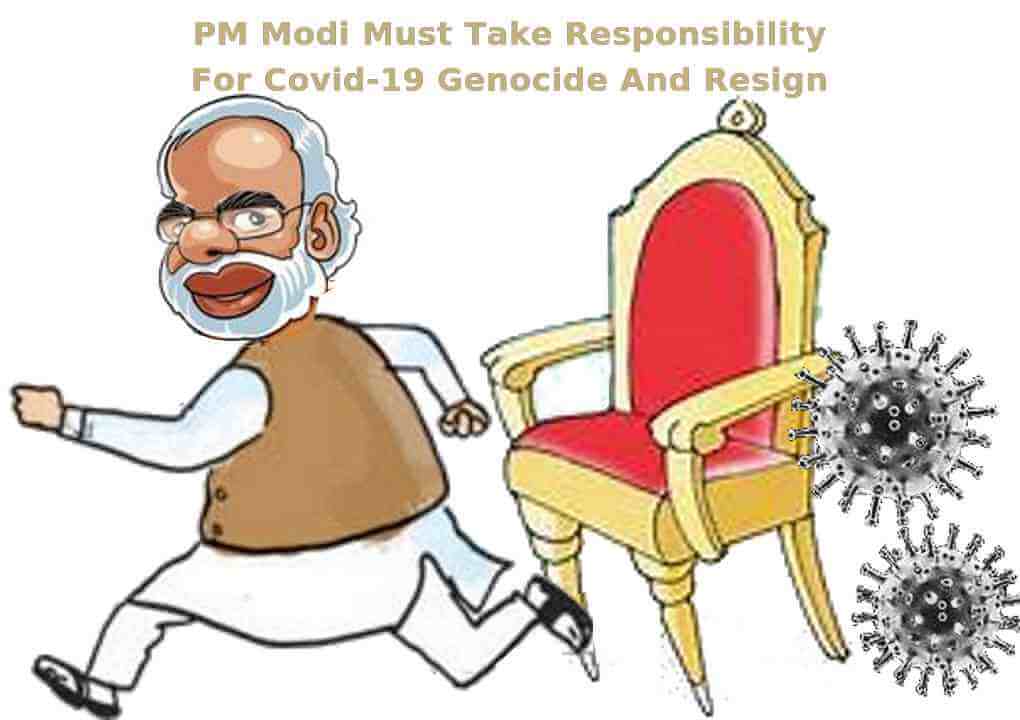 As India collectively mourns the daily deaths of loved ones in the deadly Covid-19 second wave, the depth of people’s grief and shock is matched only by the utter callousness of the Government of India.

Holding the Prime Minister responsible for “tossing all Covid norms in the air” by holding religious gatherings and election rallies, and for the deadly scarcity of medical oxygen, the national vice-president of the Indian Medical Association (IMA) called Prime Minister Narendra Modi a ‘super spreader’. The Delhi High Court termed deaths due to the scarcity of medical oxygen as “not less than a genocide”, and held the Modi government responsible.

But Modi and his cabinet and party do not even acknowledge these damning indictments, let alone attempt to correct their disastrous course. Instead, the Modi government and state governments headed by the BJP are concerned only about protecting their own “image” rather than people’s lives. Instead of setting up the long overdue central command to deploy medical oxygen and international aid effectively, the Modi regime and the RSS have launched a “Positivity Unlimited” campaign.

This campaign chides us for any focus on “negativity”. It tells us not to bother with the daily Covid-19 death count; not to look with horror at the queued up corpses at crematoriums; not to recognise that the air we breathe is full of ashes from the funeral pyres; not to view and share journalistic coverage of people gasping for breath and dying of oxygen shortage in hospitals; not to see the bodies of Covid-19 victims, dumped in the Ganga river at UP, washing up on Bihar shores; not read and share news of the former Ambassador who died in a hospital parking lot waiting in vain for an oxygen bed; and not even to verify and share information about availability or lack of beds, oxygen, ventilators and so on. All this, we are being told by the bearded charlatan “gurus” and smartly dressed TV anchors who serve as the regime’s propagandists, is mere “negativity”. Those who “spread negativity” are warned that they are being unpatriotic, and can be arrested for “rumour-mongering” and for posing a threat to “national security”. Police forces are tasked with erecting makeshift walls to keep the corpse queues and overflowing crematoriums out of sight.

Nearly every home in India today mourns someone who has fallen to Covid-19. Sarkari charlatan “Sadhguru” tells us the daily death toll is “irrelevant”. This means that we are being told that the deaths of each of our loved ones will not count even as a statistic, even as a mere number. Left to the government, it will not be counted at all. While state governments announce small numbers of daily deaths, newspapers publish page upon page of obituaries, and funerals take place in parking lots, public parks, and streets. The Government of India admits to Covid-19 second wave death toll of 2.5 lakh. The actual death rate is estimated to be anything from 3 to 8 times this number. This means that the actual number of people killed by Covid-19 and government negligence could be up to 20 lakhs – that is, 2 million deaths! This is, quite simply, a genocide.

One of the government’s propagandists is Baba Ramdev - a charlatan and Covid-19 profiteer who, along with the country’s Health Minister, had sought to peddle a product named Coronil as a Covid “cure”. Ramdev asks us to recognise that oxygen is freely available in the air, and we just need to learn to breathe properly, using our nostrils which are the only oxygen cylinders we need. If you complain that you need oxygen because the Covid-19 virus has damaged your lungs, then Ramdev mocks you as “bawle” (crazy).

And the Covid genocide in India cannot be separated from the Modi regime’s fascist policies and priorities. Governments around the world spent last year boosting their medical infrastructure and vaccination availability to cope with a second wave. Modi and his Cabinet spent the last year boasting that they had triumphed over Corona; arresting scores of young students and Muslim activists who had led peaceful protests defending India’s Constitution against the Hindu supremacist and anti-poor citizenship law and National Register of Citizens; protecting riot-mongers from his party who led mobs to massacre Muslims; illegally forcing through three anti-farmer laws in parliament; arresting and vilifying farmers, students and anyone else who protested these laws; promoting Coronil, cow dung and other quack Covid “cures”; and holding religious gatherings and election campaigns that sent the message that Covid norms required mere lip service. Who will answer for these crimes, if not Prime Minister Modi?

Modi placed the first order for vaccines a mere five days before India’s Covid-19 vaccination drive began in January – many months after other countries had stocked up on vaccines. Having politicised vaccines by promising free vaccines to election-bound states in case his party won, Modi actually allowed vaccine manufacturers to profit hugely from vaccine sales, forcing states to purchase vaccines at higher costs than the Centre did. Having announced the construction of oxygen plants in 150 districts of India, the Modi government went on to take 8 full months just to float tenders – as a result of which only 33 of the planned 162 plants have actually been built. Now, with India choking to death, Modi is busy destroying central Delhi’s historic monuments to erect a “Central Vista” project as a memorial to himself. Who is responsible for this callousness and negligence if not Prime Minister Modi?

Modi came to power accusing his predecessor Manmohan Singh of being “maun” (mute) on corruption scandals. Today, Modi is mute on the deaths of 20 million Indians – and these numbers are rising. He is mute on the fact that people are relying on opposition parties’ youth wings and citizens’ informal networks rather than his government, not only for oxygen but even for basic information. And he clearly hopes to shrug off all responsibility for his crimes. If he and his pet media refuse to acknowledge these crimes and the scale of death and destruction they have caused, he hopes that these will be forgotten before the next elections.

But India cannot afford to wait for another election to be rid of the Modi.2 and Covid.2 disasters. India needs the dance of death to stop now – and that requires that Modi step down as PM without a moment’s delay. With him, his fellow super-spreader Home Minister Amit Shah and Health Minister Harsh Vardhan must also step down.