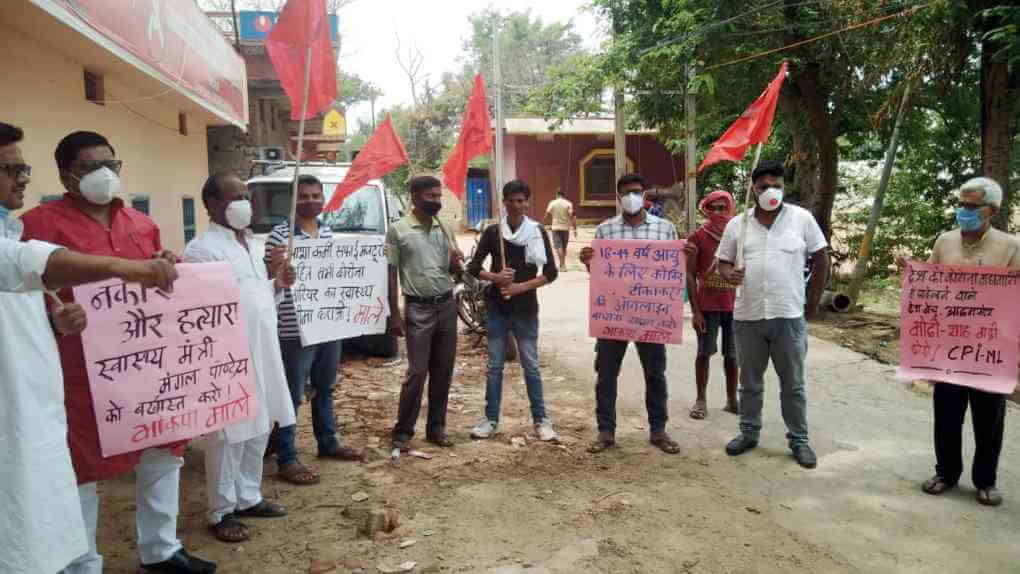 CPIML activists and supporters observed statewide protests from their homes and offices with demands for resignation of Modi-Shah, removal of Bihar Health Minister Mangal Pandey, arrest of ambulance scammer BJP MP Rajiv Pratap Rudy, and immediate release of former MP Pappu Yadav. The protests also demanded vaccination for all without delay and extension of testing and vaccination centres to Panchayat level. The main slogan for the protest was 'Desh bechu adamkhor, Modi Shah Gaddi Chhodo' (Man-eating rulers guilty of selling off the country, Modi-Shah step down from power).

At the party office in Patna, protest was led by State Secretary Kunal, BB Pandey, Pradeep Jha, Vibha Gupta, Prakash Kumar and others. State Secretary Kunal said that the 2nd wave Covid catastrophe is due entirely to Modi-Shah's unwise and anti-people policies. Dead bodies float in the Ganga while Modi is busy with his 20000 crore Central Vista project.

The protest at Chitkohra was led by Politburo member Dhirendra Jha, CC member Shashi Yadav, Murtaza Ali and others. Dhirendra Jha said that the party had long been demanding improvement of health care services in Bihar but the government turned a deaf ear. Shashi Yadav raised the demand for insurance and Corona allowance for ASHAs, sanitary workers and said the government should talk to striking PDS dealers and end the strike.

AIKM General Secretary Rajaram Singh, KD Yadav, Jitendra Kumar, Sanjay Yadav and others led the protest at the AIKM office. Rajaram Singh reiterated the demand for guarantee of crop procurement at MSP by the government.

Phulwari  MLA Gopal Ravidas protested from his home. AIPWA General Secretary Meena Tiwari protested from her home. They said that party MLAs gad recommended purchase of essential medical equipment from their MLA funds but the administration is needlessly delaying the matter.

Protests were also organized at Kankarbagh led by AICCTU leader Ranvijay Kumar and others. Shambhunath Mehta, Ramkalyan Singh and others led the protest at Patna City and Digha.

All the CPIML MLAs led and participated in the protests in their respective constituencies  Senior leader Swadesh Bhattacharya protested from the party office in Ara.

CPIML MLAs participate in Protests to demand Resignation of Modi-Shah

Leader of CPIML legislative party Mahboob Alam said that Prime Minister Modi and Home Minister Shah have no right to continue in power as they have left the people of the country to die instead of providing health facilities and protection against the pandemic. The 2nd wave of Covid has become a horrific dance of death across the country due to the wrong policies of the government.

Darauli MLA Satyadev Ram said that the administration is working at a snail's pace and not heeding our demands for essential medical equipment. Jeeradei MLA Amarjeet Kushwaha also participated in the protest, as did Tarari MLA Sudama Prasad and Agiaon MLA Manoj Manzil along with CC member and leader Raju Yadav as well as AISA and RYA activists.

Ghoshi MLA Rambali Singh Yadav, Arwal MLA Mahanand Singh, Paliganj MLA Sandeep Saurabh, and Phulwari MLA Gopal Ravidas protested with posters and placards in their respective constituencies. Mahanand Singh said that instead of strengthening District and referral hospitals and PHCs the government is actually weakening them at this crucial time of crisis. Covid is spreading rapidly in the villages but the government is doing nothing to curb it.

AISA General Secretary Prasenjit joined the protest at Darbhanga. Leaders and activists of AISA, RYA, AICCTU, AIKM, AIARLA and other organizations participated actively in the protests across the State.

Covid testing for villagers and vaccination for those above 45 began at Koriyama Middle School on 18 May 2021 at the initiative of Phulwari MLA Gopal Ravidas. MLA representative Sanjay Ravi said that by the end of the day 88 people above the age of 45 were vaccinated, whereas the testing rate is much lower than the vaccination rate and this slow speed of testing is a matter for concern.

He said that youth are dissatisfied and angry that vaccination is not available for those who are 18+, but at the same time there is a large scale delusion in rural areas that people who get vaccinated are dying. Therefore many people are afraid to get tested as well as vaccinated. Vaccination awareness aiming the people in villages and Tolas needs to be promoted on a large scale through the medical administration, local ward members, ASHA workers, local people's representatives and others.

He pointed out that the Bihar government has already deducted Rs 2 crores each from all 243 MLAs and MLCs for Corona expenses. Despite this, there is no vaccination even in Patna District for people above 18+. At the same time government arrangements are very lax regarding Covid preventive jeep-mike campaigning.

We demand that the government should run an intense miking campaign in this direction. Village chowkidars, social organisations should be pressed into service for this purpose. Daily wage earners like vendors who have lost their livelihoods can be given minimum daily wage for using their mikes, horns, etc for this purpose. This would raise enthusiasm for testing and vaccination.

The government should immediately arrange for vaccination for people who are 18+. Only then can we get fully rid of Covid. Many people helped with the vaccination program on 18 May, including social workers Sudhir Kumar, Kunal, Ram Jeevan Das, Sanjay Ravidas and others.