UP: Covid Deaths are a Massacre, Government Responsible 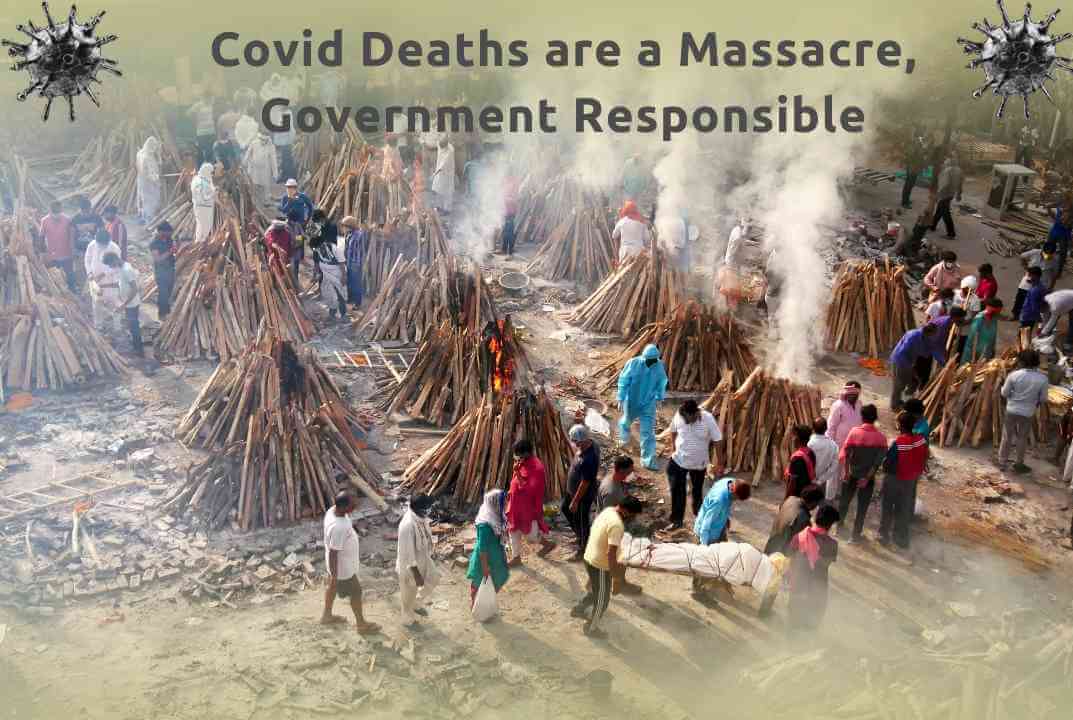 CPIML Uttar Pradesh State unit said that the Modi government has left the people of India to die in the 2nd wave of Covid. The large scale deaths due to lack of medical facilities is nothing short of a massacre, and the government is responsible for this massacre.

The party said that the conditions in Uttar Pradesh are even worse. Here the Covid data is being fudged in a sycophantic attempt to polish the Chief Minister's image. After the long queues at crematoriums we are now seeing bodies floating in the Ganga and corpses piled up on the river bank in Unnao, thoroughly exposing the government statistics. People are not able even to give a dignified farewell to their loved ones. The CM's announcement of Rs 5000 for Covid death funerals is as farcical as the PM's 'Tika Utsav' (Vaccination Festival). If timely government help for funerals had been received, nobody would have been forced to dump their loved ones thus to be savaged by vultures and dogs.

The government has shown criminal negligence in providing essential medical equipment like medicines, beds, oxygen, ventilators etc. and the Yogi government that failed to prevent large scale deaths is now making the empty boast that Uttar Pradesh is well prepared to face the 3rd wave of Covid. This is another in a series of unending lies.

Earlier also, the Allahabad High Court had caught and exposed the Yogi government's lies. For example, the huge discrepancies between available Covid hospital beds and the number shown on the government portal; the lie of the low statistics shown in the face of the huge number of Covid deaths in villages; the lie that very few people in the villages have Covid symptoms (in order to show this the government slowed down testing). Similarly, it was announced that everyone has been vaccinated, whereas availability of vaccines is very low and even absent in many places. How then can we rely upon government statistics?

The situation in the rural areas is horrific. On the one hand there is lack of awareness about Covid. In addition, the adamant conduct of Panchayat elections, ramshackle primary health system, quackery and sponsored unscientific propaganda like Ramdev's Coronil and cowdung as treatment for Covid have done everything to worsen the situation. The government is threatening to take legal action and even confiscate property of anyone who speaks of oxygen shortage or other failures of the government.
RSS Campaign For Spreading Lies

Seeing the government's humongous failure, the RSS has now come forward in defence with its Positivity campaign. This is nothing but a double lie to turn falsehood into truth. Citizens are being advised to concentrate on positivity. In other words, we are being asked to overlook all the failures, the unpreparedness despite getting one whole year's time, the arrogant boasts of having conquered Covid, the abysmal shortages of medicines, oxygen, ventilators, beds etc. Large scale death and loot are rampant, people do not have space or wood even for funerals. The lockdown has further affected lives and livelihoods. But these are 'negative' things we should ignore! International media is holding Modi to account, but RSS wants us to glorify his 'positively'!

The government itself admits to 2.5 lakh Covid deaths whereas independent observers place it at least 8-10 times that number which means 20 lakh deaths. Deaths on such a large scale are nothing short of massacre and nobody but PM Modi and his government is responsible for this. Therefore the Modi government should resign without delay.