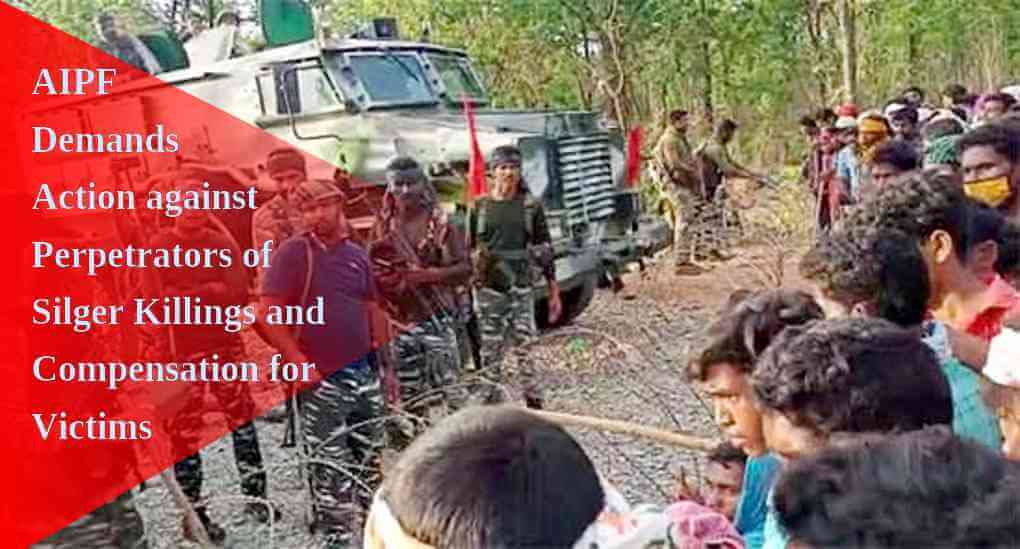 All India People's Forum has demanded strict action against the officers and jawans responsible for killing and injuring innocent adivasis in Silger (Sukma) in Chhattisgarh, and proper compensation for all the victims. The State government should take responsibility for the incident and take steps to avoid repetition of such incidents.

On 17 May 2021 para military forces unleashed horrific brutality on adivasis in Silger, Sukma District, Chhattisgarh, firing and killing many adivasis and critically injuring 18 others. Many innocent adivasis have been arrested in the context of the incident.

AIPF has expressed deep anger at this incident and demands that the State government should immediately arrest the protection force personnel guilty of this brutal massacre and try them for the murder of innocent adivasis. The adivasis were killed merely because they were opposing the setting up of a para-military camp in their area. It is unfortunate that not only have adivasis' rights over land and forests where they have been living on for centuries been snatched away, their very lives are being snatched away when they try to protect their land.

The State government should take responsibility for this entire incident, have the incident probed by a competent investigative agency and ensure strict action against the protection force personnel responsible for the massacre. Further, the State government should end this unfortunate series of brutalities on adivasis in the name of Maoism, and make its stand clear.

AIPF demands compensation to those killed or injured in the massacre. The adivasis who have gone missing in the incident should be found without delay. The manner in which human rights activists Bela Bhatia and Jean Dreze were detained for a long time when they were travelling to the spot to enquire about the situation is condemnable. We demand that local adivasis as well as human rights activists/organizations should be allowed to go there without obstruction so that the true facts of the situation are brought to light.