Black Day Observed on the Call of Farmers and Workers 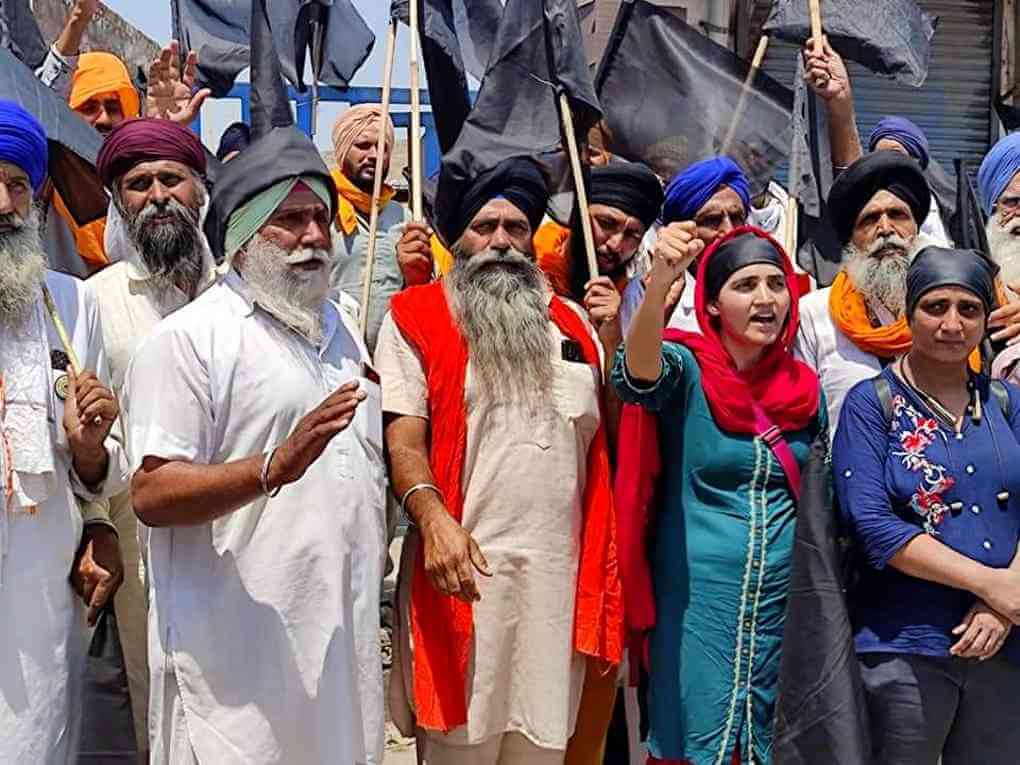 In response to the call given by the Samyukta Kisan Morcha (SKM) and trade unions to observe 26 May 2021 as Black Day for Indian Democracy, All India Kisan Mahasabha, AICCTU and CPIML organized protests across all the states.

The farmers' protests on the borders of Delhi have completed 6 months. This day also sees completion of seven years of continued attacks on democracy in India by Modi regime. All over the country people came in large numbers in solidarity with farmers and workers to demand the repeal of three anti-farmer laws and four Labour Codes brought in by Modi Government.

Protesters also highlighted the demand of statutory entitlement for remunerative MSP for all crops and all farmers.

At Delhi protest sites on borders effigies of the Modi government were burnt and black flags were hoisted on trolleys and tents.

Comrade Rajaram Singh said that the ongoing farmers' struggle in Delhi has completed 6 months. The farmers are constantly agitating for their demands but the government is adamant in corporate interests. We demand that the government should unconditionally repeal the 3 black farm laws and fix MSP based on C2. In Bihar the APMC mandis closed since 2006 should be reopened and procurement at MSP should start for the 23 crops included in MSP as well as sugarcane, potatoes, onions, milk and fish. Farmers should be given identity cards and government aid. He reiterated that the farmers would not go back without getting the 3 laws repealed. He also demanded withdrawal of the proposed Electricity Bill 2020.

Also in Patna CPIML Polit Bureau member Kunal protested with placards in support of Black Day and said that the negligent attitude of the government towards the farmers protesting in Delhi for the past 6 months is condemnable. So far more than 100 farmers have died and Covid continues to rage but the government continues to work for corporate interests. The government must listen to the real voice of the country. Our party stands wholly and entirely in support of farmers.

AIKM, AICCTU and CPIML activists also protested in various Districts in Bihar and other states.

CPIML observed Black Day on 26 May across Uttar Pradesh. Effigies of Prime Minister Modi were burnt in various Districts. Despite the police putting party leaders under house arrest at many places protest programs were organized across the State.

The party strongly condemned the police action of keeping leaders under house arrest in various Districts including Ghazipur, Pilibhit abd Chandauli and said that this is an act of silencing dissent and smothering democracy by the Yogi government.

The CPIML Uttar Pradesh State unit said that in addition to expressing solidarity with the farmers' movement, Black Day is also to protest against the anti-worker labour codes and the completion of 7 years of the disastrous Modi government responsible for large scale deaths during this pandemic.

At the Lalkuan party office in Lucknow the police prevented protesting activists from going outside. Later the Kaiserbagh Thana Inspector came to the office and accepted the 5 point memorandum addressed to the President submitted by District in-charge Ramesh Sengar. Black Day was also observed at BKT Block and from many homes in Lucknow.

AIKM leaders Ishwari Prasad Kushwaha and Gulab Singh were kept under house arrest in Ghazipur.  They along with other comrades protested from home with black bands. Black Day was also observed at the Ghazipur District office, Sewarai office, Gahmar, Basuka, Khanpur, Gaibipur, Hathauda and Baghri villages.

The police tried to stop protesting farmers on dharna in Hargaon Block, Sitapur District but they had to withdraw in the face of the protests. Later the SDM went and accepted the memorandum from the farmers. Protests and dharnas were also held at the District court led by Panchayat member Arjun Lal and others. At Rahul Nagar in Pilibhit the police put District Secretary Debashish Rai and other activists under house arrest. Afroze Alam led the protest in Jadopur Gahluia village.

MNREGA workers also protested in support of farmers at Salumber Tahsil. They uploaded photos on social media with black bands and job cards, demanding economic relief in these times of dire unemployment.

AICCTU Rajasthan President Shankar Lal Chaudhury said that the government has failed in essential measures like oxygen, ventilators, medicines and hospitals needed to keep the 2nd Covid wave under control. Covid death statistics are being undercounted in order to keep PM Modi's image from getting tarnished. Many Covid deaths in rural areas across the country have occurred without testing. The corpses floating in the Ganga and buried on the river banks expose the lies of government statistics and the all round failure of the government. AITUC General Secretary Jagdish Shrimali said that farmers have protesting for over 6 months but the government is insensitive to their just demands. CITU District President Rajesh Singhvi said that the vaccination drive is going at a snail's pace and we cannot fight the pandemic at this rate.

Kisan Mahasabha leader in Rajasthan Gautam Morila said that the government is working in the interest of corporate houses and putting all the burden on farmers and workers. Labour leaders Himmat Chhagwal and Leela Sharma and AIPWA leader Razia demanded repeal of the 3 black farm laws, 4 labour codes and Electricity Bill 2020. Professor Hemendra Chandalia said that the exorbitant hike in petrol-diesel prices is further burdening the already suffering common people.