Assembly Election Results Are A Mandate Against BJP's Communalism and Misgovernance 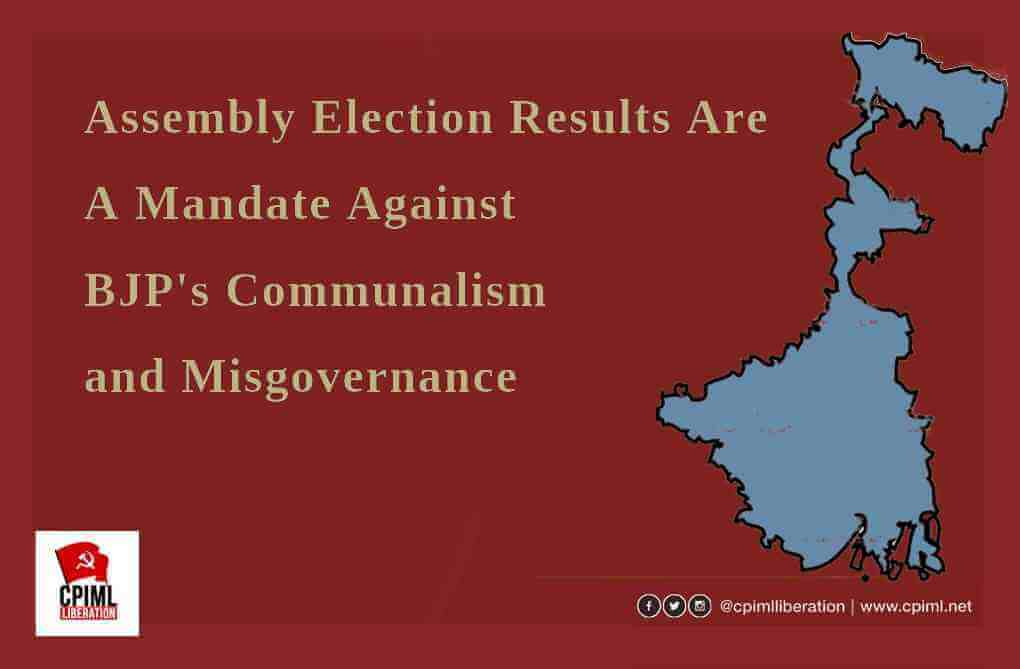 The results of the Assembly Elections of five states has come in the midst of the deadly Covid-19 crisis in India, created by the Modi regime.

In West Bengal, the BJP's boasts of victory have been ruthlessly proved hollow by a historic anti-fascist mandate. The Ekusher Dak (Call of 2021) and No Vote to BJP campaigns as well as the farmers' movement, helped alert the people of the state to the danger presented by the BJP and the Modi regime. The entire might of the Modi Government, the top BJP leadership, as well as the partisan role of various instiutions including the Election Commission, as well as a viciously Islamophobic campaign by the BJP, dismally failed to deliver a victory for the BJP. We extend warm congratulations to the Trinamool Congress for this victory.

In Kerala, the LDF was reelected with a decisive mandate, which vindicated the state government's able handling of the Covid-19 pandemic throughout last year, in contrast to the Central Government's callous and incompetent performance. We congratulate the CPIM and the LDF for this victory.

Tamil Nadu has given a welcome mandate against the AIADMK Government, which was widely perceived as a thinly veiled front for the BJP. However, there are signs of BJP inroads in the state. The party has secured two seats and is a close second on two others, and also appears to be gaining influence over the AIADMK. Democratic forces of Tamil Nadu must heed this early warning and resist any possible rise of BJP in the state.

The AINRC-BJP alliance has secured a win in Puducherry. People of Puducherry must be alert to safeguard Puducherry's cultural diversity, and resist any attempt to use the union territory as a base for backdoor manipulation by BJP in Tamil Nadu or Kerala.

In Assam the BJP has secured a second term. But here too there are some encouraging signs. We congratulate Akhil Gogoi, activist of the anti CAA and farmers' movements for his victory. His victory is especially significant because he contested from prison, because of a draconian UAPA case against him by the BJP Government.

As the Covid-19 virus spreads to remote corners of India and causes suffering and deaths, the newly elected state governments must lose no time in working to ensure relief and medical care for the Covid-affected people as well as to halt the further spread of the virus.