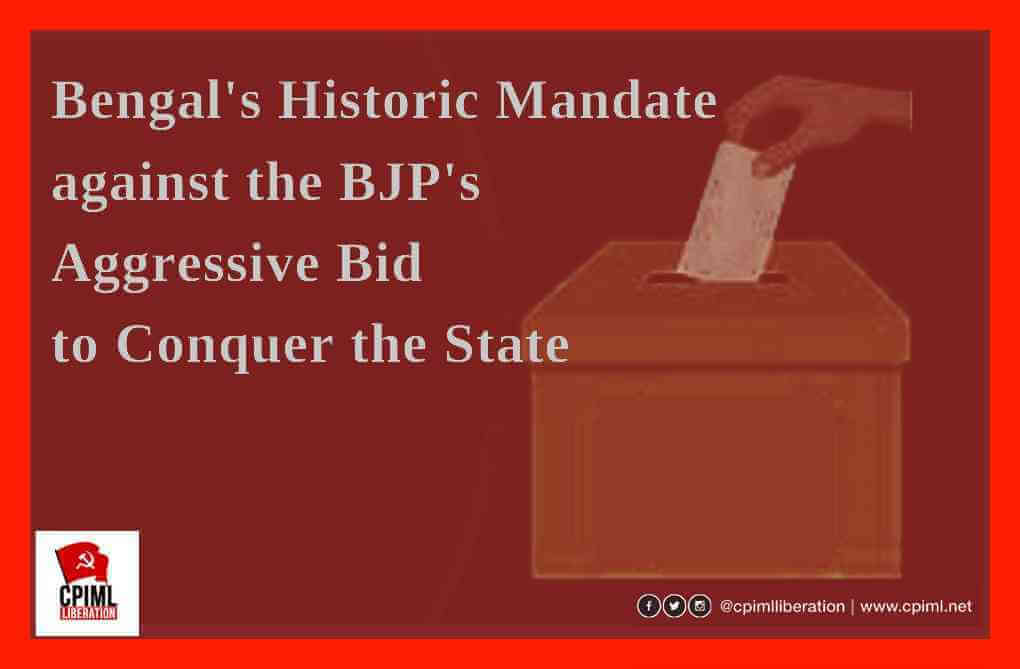 The results of the West Bengal elections are truly historic.

After the Bihar elections which came so close to defeating the BJP, this clear anti-BJP verdict in West Bengal will greatly inspire and strengthen the struggle to save the Constitution, democracy, and the federal structure of India, and the diverse and plural Indian identity. The narrow defeat of Mamata Banerjee in the final announcement of Nandigram does not weaken the resounding nature of the verdict.

This is a mandate by the people of West Bengal against the BJP's aggressive and unscrupulous bid to conquer the state. BJP's conspiracy to seize power in Bengal by massacre and intimidation of voters and through engineering defection, has been brought to a grinding halt.

This verdict is a resounding rebuff by the progressive and inclusive legacy of Bengal to the politics of bigotry, sectarianism and hatred. It is a strong assertion of the struggle for survival, dignity, and rights against the corporate plunder of people's livelihoods.

On the birth centenary of Satyajit Ray, we would like to express deep gratitude to the wise and conscious people of Bengal for this clear verdict in support of democracy and Bengal's heritage. Congratulations to Mamata Banerjee and the Trinamool Congress.

Responding to Ekusher Dak (The Call of 2021) and the No Vote to BJP campaigns, Bengal's students and youth, and activists of wide-ranging people's movements, conveyed the urgency of defeating the fascist design of the BJP to every nook and corner of West Bengal. Representatives from the all-India farmers' movement too had appealed to the people of the state to use their votes to defeat the BJP and strengthen the movement for repeal of the disastrous farm laws of the Modi government. These concerted efforts that helped to achieve this loud and clear verdict, will play the role of vigilant sentinel for democracy in the days to come.

We appeal to the broad left supporters of the state to see this verdict as a victory of democracy and a powerful anti-fascist assertion by the people of Bengal. The Congress-Left Front leadership in Bengal must of course reevaluate their stand in the light of this result. I hope the Trinamool Congress government in its third term will respect people's aspirations and the fundamentals of democracy.

The most urgent task for the people of the state and the country at this moment is to stand with people during the Covid-19 crisis, defeat the pandemic, save lives, and help Covid-19 affected people. The long-drawn-out election process has further aggravated the danger in West Bengal. The government and the society must come forward now to tackle the situation with single-minded determination.