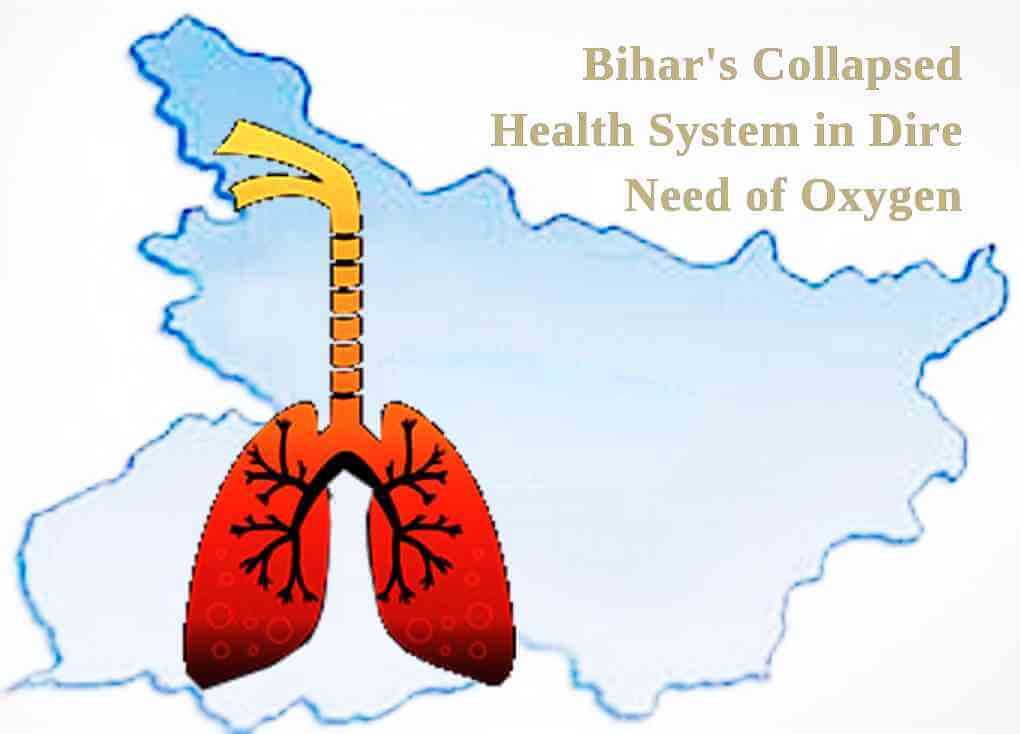 The second wave of Covid is proving to be mayhem in Bihar. Acute shortage of beds, oxygen, ventilators and medicines and gross mismanagement by the administration has resulted in a horrific dance of death across the State from cities to villages. More than Covid itself, people are terrified of the problems they will have to face if they need treatment. The constant fear is, how will we get a hospital bed or oxygen if we need it? This fear makes them rush straight to Patna. But the condition of higher health institutions in Patna is also not good. Pressure is constantly increasing on these hospitals and they are beset with problems like shortage of beds, oxygen, medicines etc. There is chaos and anarchy all around, making the situation extremely critical.

The enquiry team found that the government had made no preparations to fight the second wave of Covid. Did the government sit back in the complacent belief that Corona was a thing of the past? If yes, then this is nothing short of a criminal act. Even if the government had just revamped its health system from top to bottom, the situation would not have been as terrifying as it is today. But the government did not see fit to take even a single step in this direction, leave alone constructing Covid specialist hospitals. Now that the entire State is in the grip of Covid, government initiatives appear even weaker than they were earlier. Only NMCH in Patna has been declared a Covid dedicated hospital, whereas in the first wave Patna AIIMS was also a Covid dedicated hospital. IGIMS is only just beginning to function. The government has only now woken up to concerns about District level and referral hospitals. A 500-bed centre in Bihata has been suddenly closed down. The Bihar Deputy CM has now seen fit to write to the Centre to restart this hospital. Clearly, the government must take steps on a war footing to fight this second Covid wave, otherwise things will deteriorate even further.

The government has announced free treatment for Covid patients at IGIMS but beds are only just starting to be arranged there. Do bed, oxygen and ventilator arrangements at these hospitals appear sufficient in any way? It is highly unfortunate that the government has not been able to arrange even a minimum of 500 oxygen beds at all the big hospitals in Patna. What can be expected except mayhem in these conditions?

The common people have no trust whatsoever in the government's health system at lower levels. The situation is so bad that even if there are arrangements for bed and oxygen these District-referral hospitals are considered a sure route to death because there is no guarantee of doctors and other health workers, electricity, testing facilities etc. For example, despite having 100 beds out of which 30 are oxygen beds, Masaurhi PHC has not had a single patient admitted so far. Covid patients are even called through phone for admission, but they prefer to rush straight to Patna. The hospital administration also does not want to take any risk and so gives priority to referral work. Similarly Vikram has an isolation centre with 100 beds (5 with oxygen) but not a single patient. The doctor here got infected with Covid and went into isolation, after which treatment at this centre has come to a standstill. Masaurhi is testing only a mere 60-65 people per day. Two quarantine centres, one a referral hospital and the other a training centre, are operating in Masaurhi. Only 2 people are admitted in both these centres. The number of doctors posted is 15 but currently only 8 are on duty. The rest have been called to Patna. Of the 54 posts for nurses, 52 have been appointed, out of whom 2 are in quarantine and 23 are on duty. There is not a single ambulance, whereas along with Masaurhi Corona has spread to 23 villages so far.

There are 30 beds in the Phulwarisharif Community Health Centre. 650 Covid positive patients have been identified here so far and all of them are in home isolation. There is not a single patient in the hospital. 5 of the 13 posted doctors have been called by the District. The testing rate is 300 per day. Of the 16 authorised A Grade nurses, not a single one is available. There are no arrangements for ambulances. The situation at the Punpun hospital is more or less the same.

A 100-bed isolation centre is soon going to be started at the Khiri More ITI with 10 oxygen beds. Oxygen shortage has been identified as one of the biggest problems here. The isolation centre to be started at the Aryabhatt Teacher Training College in Dulhin Bazaar has not started yet. At many places centilators are lying waste for want of skilled doctors, while at other places there is a hue and cry for ventilators.

From District to referral hospitals, from Community Health Centres to PHCs, the condition is so poor that the people cannot place any trust in them. Therefore the pressure on Patna hospitals is ever-increasing while they also have very limited capacity. A senior doctor at Pana AIIMS told us that if the lower hospitals shouldered even a fraction of the burden, this chaos could have been controlled. The government should ask itself how it can treat crores of population at just a handful of hospitals. Clearly the 2nd wave of Covid is so devastating because the State's health system itself is in dire need of oxygen.

3. Shortage of human resources at hospitals:

The question is not just one of increasing beds and oxygen and other basic infrastructure but also one of human resources. The administrator of one of Patna's government hospitals says that beds can be increased, but how to get the required number of doctors and health workers? This is the government's job. Like other departments, the health department also has thousands of vacant posts. 8786 of the 11645 doctor's posts in the State are vacant. The low number of paramedics, known as the backbone of the health system, is worrisome. According to one report the figures are 181 surgical room assistants, 171 technicians, and only 40 dressers. There have been no new appointments to these posts for the last 40 years. How can this ramshackle health system battle Covid? Instead of appointing doctors and health workers in Patna hospitals, such personnel are called up from the lower hospitals to make up the shortage. As a result the lower hospitals suffer, and lose credibility in the eyes of the people.

Therefore it should be ensured that PHCs, additional PHCs, Community Health Centres, referral and District hospitals are provided with sufficient basic infrastructure like electricity, essential medicines, beds, ixygen, ICU, ambulances and other equipment. District hospitals should have a minimum of 100 ventilators and adequate human resources. If the government is serious even now, positive results can be had. There should also be a back-up team of doctors and health workers so that work can continue smoothly in case medical personnel get infected with Corona. The government should either appoint doctors and health workers on a large scale or find alternative arrangements. PG students, RMS practitioners, rural nurses etc can be given minimum training so that they can guide the public and make them aware and alert. A system should be developed whereby Covid patients first go to lower hospitals and get referred to higher hospitals only if required and after availability of beds is ascertained. Otherwise people will be forced to run from pillar to post and will die from lack of timely treatment.

4. About 30% population likely to be Covid-infected:

A senior doctor at Patna AIIMS told us that this time 30% population, i.e. 4 crore people are likely to become Covid-infected. Of these 4 crores, 25% i.e. 1 crore could become critically ill and will need oxygen and ventilators. Therefore the government should think about treatment for about 1 crore patients and plan accordingly.

Leaving aside one or two hospitals in Patna, the inhuman attitude of private hospitals is extremely worrisome. As per government orders private hospitals can take a maximum of Rs 8 lakhs from a Covid patient. We must think: in this situation how can the poor, workers, lower middle class or middle class get treatment in these hospitals? The expenses for one Covid patient at Paras Hospital amount to Rs 4 to 5 lakhs. Clearly, people from a poor background cannot even dream of such hospitals.

The oxygen crisis is due to mismanagement and black marketing. Profiteers are minting money. The government should take a strict view of this. On the one hand while the city's social organizations are working day and night to arrange oxygen for patients, people are being forced to buy oxygen at Rs 30000 per cylinder from profiteers. Remdesivir is also proving to be a means of looting the people. NMCH has put a stop to its use, citing WHO findings. But this medicine which costs Rs 2700 is so much in demand that it is selling at Rs 50000. Clearly this harms the patients more than it helps them. At NM H all medicines other than Vitamin C are having to be procured from outside. Often there are unfortunate incidents of fights and arguments between doctors and patients' families. All the above 4 hospitals told us that there is no shortage of oxygen but patients at these hospitals also are complaining of oxygen shortage. There's a world of difference between what is said, what is shown, and what is done. It's a bizarre situation in Patna.

The slow rate of Covid testing is proving to be an escalator of the crisis. For example, testing at the NMCH Covid testing centre has stopped due to the centre getting infected. Therefore the treatment process is also affected. After being declared a Corona dedicated hospital, NMCH does not admit patients without a Covid test. Therefore immediate steps should be taken to increase the rate of testing and results within 24 hours should be guaranteed so that timely treatment can begin and further spread can be curbed. The Covid testing arrangements in rural areas are even worse.

8 . Not right to weaken the system for non-Covid patients:

Covid is a huge attack on the human race and is swallowing up people at an alarming rate. But this does not mean that people with other serious illnesses should face obstruction in treatment. The government should be alert to continuing smooth arrangements for their treatment and an alternative system should be put in place.

One reason for the present chaotic situation is failure to get accurate and timely information. The government's Sanjeevan App is not updated and many of the helpline numbers issued do not work. The Sanjeevan App should be updated every 6 hours so that the common public get proper information about availability of oxygen, beds etc. This information should be disseminated through radio and other media as well.

10. The government should arrange free thermometers, oximeters and medicines for those who are home quarantining. In view of the crowds at vaccination centres, this service should be made more extensive.