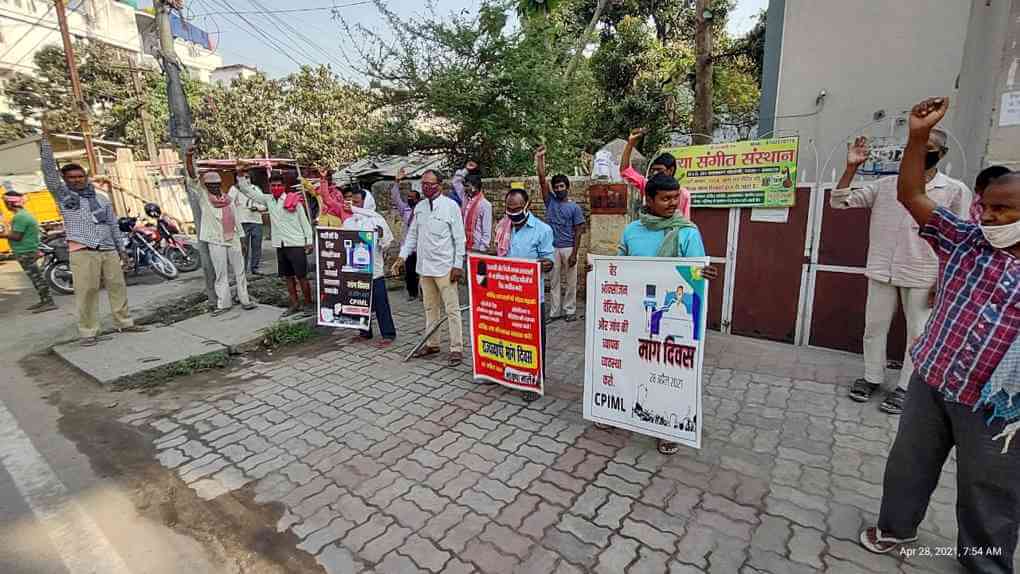 CPIML organized Demand Day across Bihar on 28 April 2021 on the following issues: guarantee oxygen beds for all Covid patients; reserve 50% beds for Covid patients in all government and private hospitals in Patna; arrange 500 beds and 100 ventilators in District hospitals; set up temporary hospitals and appoint doctors and other health workers without delay or make alternative arrangements; speed up Covid testing.

Dhirendra Jha said that the Nitish government made no attempts to boost the health system over the past one year and has failed to provide relief for the people. Mangal Pandey has been made Health Minister once again though he has a proven record of non-performance. The Opposition's suggestions go unheeded. We have been consistently demanding that 50% beds in all hospitals be reserved for Covid patients, but the government never listened. Now the government needs to work on a war footing to handle the crisis.
Ranvijay Kumar and other leaders at the protest in Kankarbagh said that the new Vedanta building should start being used without delay as a Covid hospital with oxygen and beds. They also took stock of the temporary Covid hospital being constructed in the Patliputra Indoor Stadium and expressed concern at the slow rate of progress. The protest at Ashiana Nagar was led by AICCTU leader Jitendra Kumar and others.

Participating in and leading the protest at Ara were MLA Sudama Prasad and others. Demand Day demonstrations were also held at Sabdesh Block and Khutaha in Tarari Block. The protest in Gaya was led by District Secretary Niranjan Kumar and AIPWA leader Rita Barnawal.

Comrade Kunal said that there should be arrangement for vaccination for all. Our country produces some rare types of materials which we supply even to the US, but we do not even have bottles for storing vaccine. This has made the situation grave, otherwise the entire country could have been vaccinated easily.

Condemning Sushil Modi's tweet that a minimum price for vaccination should be fixed, Comrade Kunal said that all this is being done to harass the poor. We have seen the fate of previous government projects and how the poor are oppressed by demanding papers. Therefore our demand is that all people including the poor should be given unconditional and free vaccination.

The Covid Help Centre organized by CPIML-AISA-RYA at Chhajjubagh in Patna also started food and medicine services for the needy from 28 April 2021. The demand for food and medicine has also increased hugely along with demands for beds and oxygen. Patna City Secretary Abhyuday and RYA leader Vinay Kumar reached medicines to Shri Arvind Ji, a patient residing in Shivpuri.

The Help Centre also has doctors who are giving advice and consultation. They include Dr PNP Pal, Dr Satyajit, Dr Aleem Akhtar and Dr Prakash. The Help Centre has also received calls with seroous complaints about some private hospitals, like discharging the patient saying that they have run out of oxygen. In some cases this has resulted in the death of the patient. This is a serious situation which should be monitored by the government.

A CPIML team comprising Ranvijay Kumar and Pannalal visited the temporary Covid hospital being constructed at the Patliputra Indoor Stadium in Kankarbagh. They said that only 20 workers have been employed for this work. We were unofficially told that there would be 200 beds. Our demand from the government is that the number of workers should be increased and the construction speedily completed, and the number of beds should be increased. The Medanta building is already constructed and ready, and a temporary hospital can be set up there also

Teams to assist the Covid Help Centre are visiting NMCH, PMCH and Patna AIMS and giving regular feedback to the Help Centre.