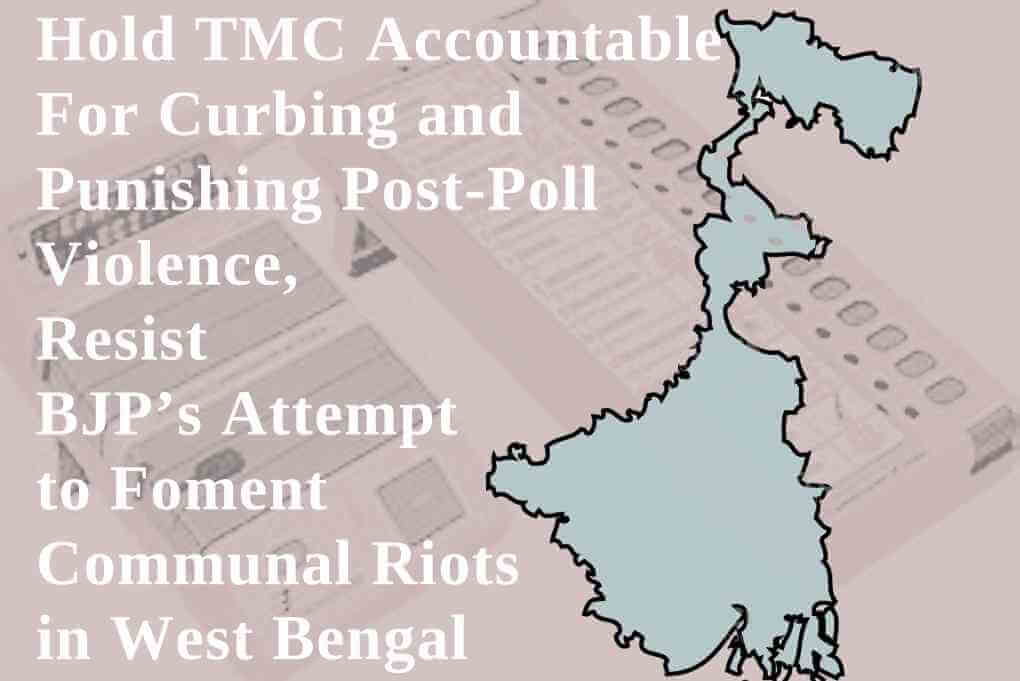 The West Bengal Assembly election mandate was a comprehensive rebuff to the BJP’s Islamophobic election campaign. Immediately after the results were out, however, W Bengal is witnessing disturbing instances of post-poll violence, affecting supporters of all parties. What is even more disturbing is the concerted attempt by BJP leaders to spread fake news and give a communal spin to both the verdict itself, as well as the violence.

It is clear by now that those injured or killed in post-poll violence in West Bengal belong to the BJP, TMC, and CPIM. CPIML activists who have intervened in some instances to stop clashes, have also faced violence. Even though the violence is not one-sidedly being inflicted by the victorious TMC on its rivals, the fact is that the TMC which has been reelected for a fresh term, bears the responsibility to ensure that the violence is curbed, and all those responsible arrested and charged.

Instead of seeking to calm the situation, senior BJP leaders have lost no time in trying to foment communal violence and discredit the mandate by giving it a communal spin. A Rajya Sabha MP of BJP, Rakesh Sinha, blamed a Muslim “minority veto” for the decisive defeat of the BJP in Bengal! He falsely implied that Muslims, by voting en masse, succeeded in defeating a Hindu party. The fact is that the majority of voters – both Hindu and Muslim – voted against the BJP. Swapan Dasgupta, former BJP Rajya Sabha MP who contested and lost an MLA seat in Bengal, tweeted out fake news that Hindu BJP voters were being chased out of villages by TMC’s Muslim mobs. BJP General Secretary Kailash Vijayvargeeya also tweeted a video, claiming Muslim mobs were beating up Hindus, turned out to be totally false.

The BJP propaganda machine is seeking to project the electoral battle as one between Hindu and Muslim communities, rather than between contending political parties. So, their social media campaign, and Rakesh Sinha’s tweet, claims that 30% Muslims vote “unitedly” but 70% Hindu voters are “divided”, as a result of which the Hindu supremacist BJP ends up defeated. The facts are very different: most Hindu and Muslim voters alike have chosen to reject BJP’s politics of communal hatred.

The BJP’s election campaign in Bengal had a single-point agenda – to project the TMC as pro-Muslim and anti-Hindu, using the most abusive Islamophobic language imaginable. This campaign fell flat on its face – the election results show that Bengal’s voters, including those who are Hindu, found this campaign to be not just unpersuasive but abhorrent and alarming. The BJP’s post-election propaganda blaming the verdict on an imagined “Muslim votebank”, comes from their frustration at their failure to craft a captive Hindu votebank. They cannot afford to admit that there is such a thing as a “justice votebank” – of voters across religious identities, eager for social, economic, and political equality and justice.

The BJP is seeking to stoke communal sentiments over the election verdict, not just inside W Bengal but nationally. They seek to divert attention away from the deadly Covid-19 catastrophe that the Modi regime has created. This raging pandemic has been made worse by an artificially created scarcity of oxygen, hospital beds and medical care. Yet, instead of working urgently to make sure global aid reaches suffering people, the Modi government chose to hold an online workshop to coach 300 top central government officials in “perception management”! This workshop aimed to teach the officials to “create a positive image of the government”, manage “perception through effectively highlighting positive stories and achievements”, and making the government “be seen to be sensitive, bold, quick, responsive, hard-working etc.” As usual, the Modi regime is obsessed with saving its own image rather than with saving the lives of Covid-affected people.

A Government that is not concerned about saving lives during a pandemic and instead reserves its energies for image-building exercises and communal narratives, does not deserve to be hold power. Narendra Modi must resign as Prime Minister if at all India is to get a chance to survive the Covid-19 crisis and minimise further deaths.

As for West Bengal, the onus is certainly on the incumbent TMC government to stop the violence firmly, and channel all resources and energies towards battling the Covid-19 pandemic in the state.