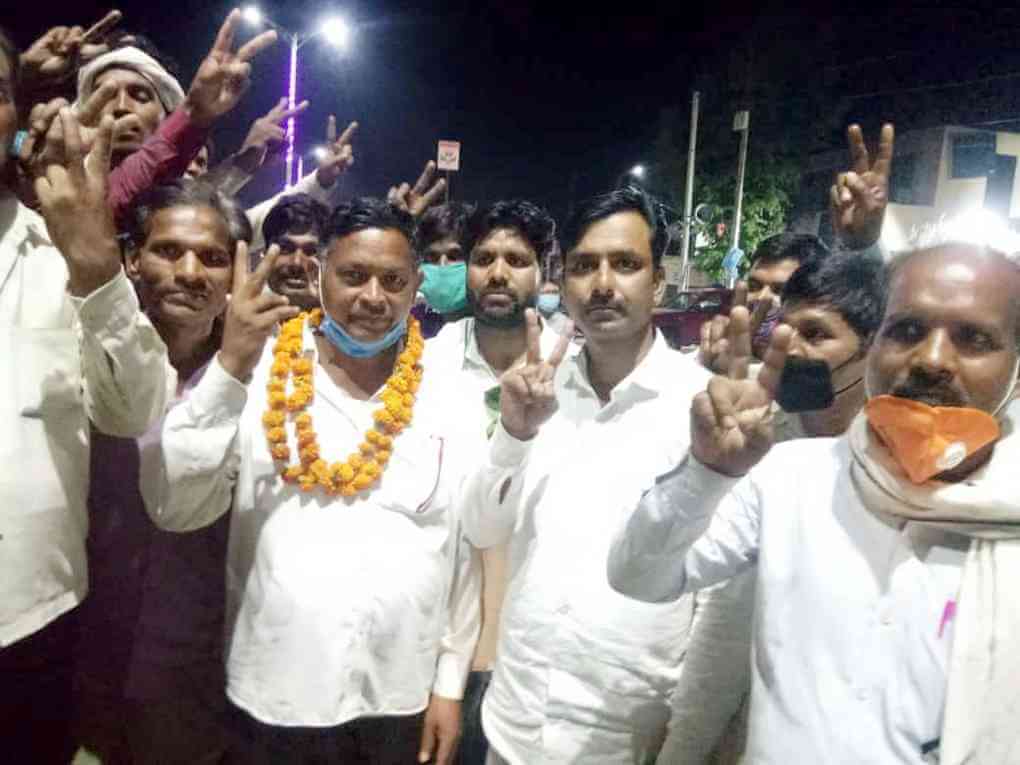 Amidst the 2nd wave Corona crisis, two CPIML candidates have been elected to the District Panchayat (District Council). Comrade Arjunlal (CPIML State Committee member) polled about 11000 votes and won the Ward No. 14 (Hargaon 2nd seat) from Sitapur, defeating his nearest rival by about 7000 votes.

The second victory is in Devaria District. Comrade Collector Sharma (CPIML District Committee member) has won the Ward No. 26 (Bhaluani Central seat) with 5985 votes, defeating his nearest rival by 316 votes in a close contest.

Detailed results from Districts are yet to come.

As such, the Election Commission did not hold the Panchayat elections on a party basis, but still almost all political parties had released their own authorized candidate lists. All parties have their own claims regarding the results, but media reports indicate that the performance of the BJP is not good. BJP has suffered considerable losses in Western Uttar Pradesh as a result of the farmers' movement. Other factors are the Covid pandemic and the Yogi government's bad governance abd failure to stop the large number of deaths. For example, BJP's performance can be said to be poor from capital Lucknow to Prime Minister's constituency Varanasi to Ayodhya and Mathura (pivotal for BJP's agenda) and Chief Minister's constituency Gorakhpur.

BJP has suffered big losses in the Lucknow District Panchayat elections, winning only 3 out of 25 Panchayat seats while Samajwadi Party, BSP, and independents have won 10, 4, and 8 respectively. Sitting Mohanlalganj BJP MP Kaushal's daughter-in-law has been defeated by 6000 votes by SP candidate Ram Pyari. Two-time MP and BJP candidate Reena Chaudhury has been trounced by SP supported Palak Rawat by 2099 votes.

Out of the 40 seats in Ayodhya, SP has won 24 while BJP has won only 6 seats. Independents have won 12 seats.

In Mathura, BSP and RLD have won 12 and 9 seats respectively with only 8 seats going to BJP. SP has won 1 and independents have won 3 seats.

In CM Yogi's stronghold Gorakhpur there are 68 District Panchayat seats. BJP is claiming victory on 20, SP on 19, and independents on 24 seats.

The Yogi government's decision to conduct elections amidst the 2nd Covid wave has helped pandemic reaching remote rural areas. People are dying in villages due to lack of medical treatment. A CPIML team that visited Naganar Haraiya village in Robertsganj Tehsil, Sonbhadra District said that 7 people including children have died there with Covid-like symptoms. There is no dalit-adivasi household where at least one or two people are not ill. Neglected by the District administration, there is illness and fear in this entire area. There is no availability of trained doctors or medicines. Villages are not on the government's agenda either.

This is the situation in every District as Corona has rapidly set foot in the villages. The government exposed its negligence by making no preparations to cope with the 2nd Covid wave. In addition, the government spread the virus exponentially by conducting Panchayat elections during this time. According to government health officials, one-fourth of the 1st wave of Covid patients were in the villages whereas in the 2nd wave half the patients are in the villages. Clearly the Panchayat elections are a big contributing factor to this. Now the government is busy hiding its failures by covering up the truth, silencing people, threatening and confiscating property of people who complain of lack of medical facilities and oxygen. Incredibly, cases are even being registered against persons appealing on social media for oxygen or other assistance for Covid patients. Meanwhile, crematoria in the State are overflowing and long lines of dead bodies (from Covid) are queuing up outside.