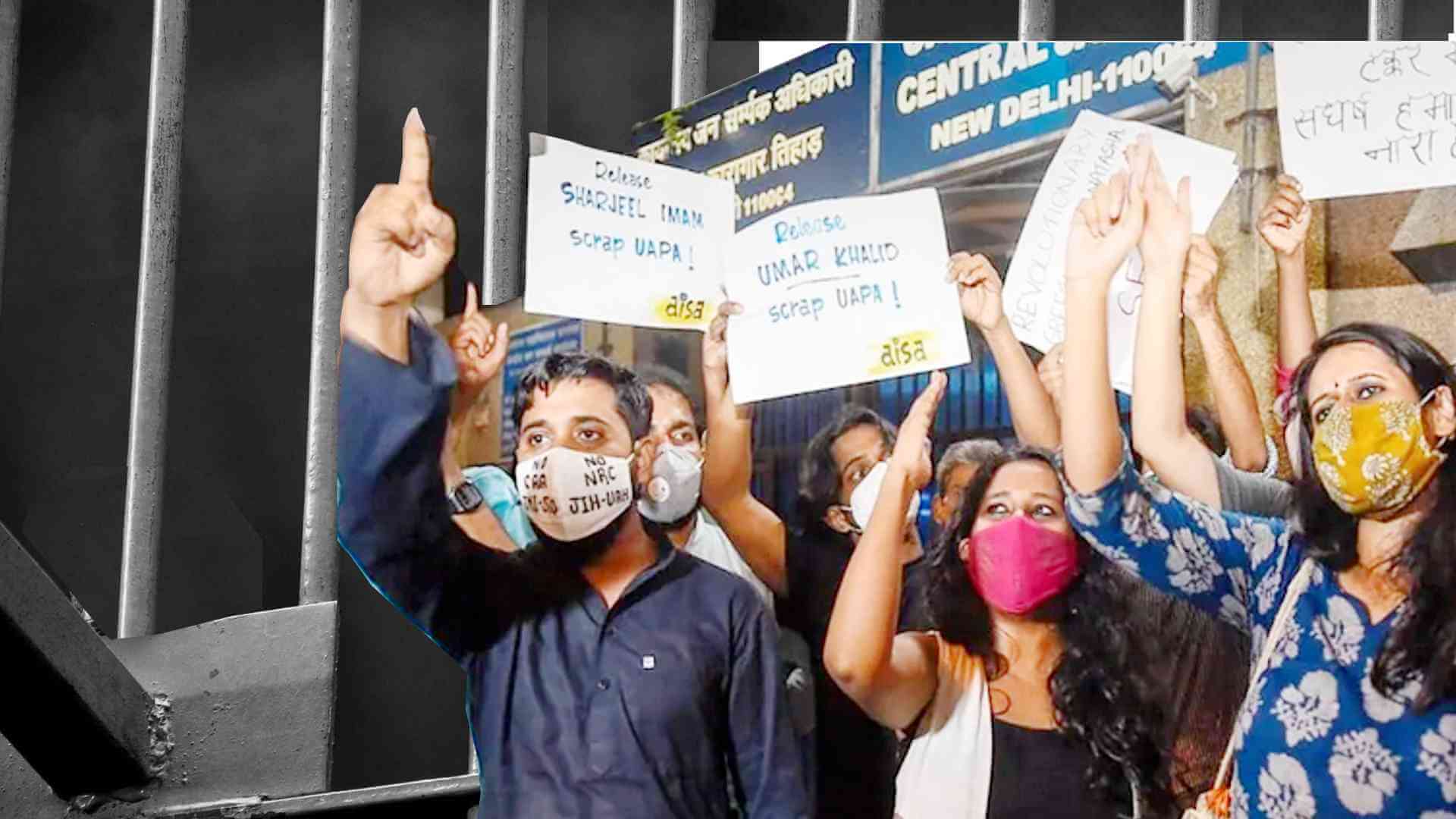 The Delhi High Court judgments ordering the release on bail of three of the anti-CAA student activists charged under UAPA is a long-awaited breath of oxygen. It offers some relief from the Delhi Police witch-hunt that since last year has been been choking off democracy’s life-breath: protests against unjust, discriminatory and fascist laws like the CAA, NRC and NPR have inspired courage and hope in the struggle for democracy.

The three students released on bail - Asif Iqbal Tanha, Natasha Narwal, and Devangana Kalita – boldly asserting their commitment to continuing the struggle against CAA, NRC and NPR. Incarceration and injustice (and in Natasha’s case the impossibly high cost of losing her father to Covid without a chance to bid him goodbye) have failed to silence these young fighters.

The Delhi HC bail orders have laid bare the utter hollowness of the Delhi Police’s attempts to equate the anti-CAA protests with a terrorist conspiracy. Calling it a “sad day for democracy”, the HC points out that “in its anxiety to suppress dissent and in the morbid fear that matters may get out of hand, the State has blurred the line between the constitutionally guaranteed ‘right to protest’ and ‘terrorist activity’”, thereby placing “democracy in peril.”

The Delhi Police is after all merely a pawn of the Modi-Shah regime; and the representatives of the regime have reacted to the Delhi HC orders with a loud performance of contempt and outrage. The prosecution appealed the bail orders in the Supreme Court, which while denying a stay on the orders, nevertheless instructed that those orders could not serve as a precedent in other UAPA cases, pending the SC’s final judgment.

It is unfortunate that the SC, even as an interim measure, acted to contain the impact that the Delhi HC verdict could have had towards freeing unjustly incarcerated persons whose very lives are at risk in the pandemic. Thanks to this SC order, the Modi Government, while unable to prevent Asif, Natasha and Devangana from getting bail, has succeeded at least for the time being in preventing other anti-CAA protestors from being able to benefit from the Delhi HC’s reasoning.

However, the Delhi HC verdict has in effect declared that the “Emperor is naked” – i.e that the Delhi Police’s UAPA chargesheet in the Delhi riot cases have no substance once they are “shorn of superfluous verbiage and hyperbole”. Refusing to be overawed by the smokescreen of “alarming and hyperbolic verbiage”, the HC has named what is in plain sight: that the factual allegations against the anti-CAA activists refer merely to protest, and cannot be termed “terrorism”.

The High Court vindicates what anti-CAA and farmers’ movement protestors have been saying all of last year: that it is not a crime, let alone a crime of sedition or terrorism - to organise protests against laws enacted by Parliament, or to call for “chakkajam” (blockade of roads). To term protests and acts of civil disobedience as “terrorism” and use the UAPA to indefinitely imprison the protestors, puts democracy in danger.

The High Court also rightly defends the right of the accused to a speedy trial. Undertrials in India languish for years in prison because they cannot meet unreasonable bail conditions or costs. It is no coincidence that a disproportionate percentage of these undertrials are from Dalit, adivasi and Muslim communities, and most of the undertrials are poor. The draconian UAPA, aided by narrow and regressive interpretation by the Supreme Court, has compounded such systemic injustice, by legally seeking to prevent courts from examining the merits of the case while hearing a bail petition. The UAPA has become a weapon by the State to imprison human rights defenders indefinitely, since police forces and agencies like NIA stretch out “investigation” for years, and bail is denied to the accused in the meantime. The Delhi HC corrects this, drawing on the precedent of the Kerala HC bail in the Najeeb case which was upheld by the SC, and reminding courts that it is their duty to free the accused on bail to prevent their lengthy incarceration. It explicitly rejects the suggestion by the Additional Solicitor General that the courts should only offer relief after waiting till the accused’s “right to a speedy trial guaranteed under Article 21 of the Constitution is fully and completely negated”.

The Delhi HC bail orders vindicate what pro-democracy activists have been saying since last year: that the Delhi Police investigation is blatantly biased, and has spun a fantastic conspiracy theory to falsely accuse anti-CAA protestors, especially those of the minority Muslim community, of the very “riots” (in fact, planned and targeted violence) of which they were actually victims. The Delhi Police is yet to take any action at all against Kapil Mishra, Anurag Thakur and other BJP and RSS leaders who called upon mobs to shoot and kill protestors, and led violent, armed mobs on Delhi streets.

While every UAPA prisoner must get bail in keeping with the principles outlined in the Delhi HC order, that alone will not constitute justice. Justice demands that the whole Delhi Police investigation be scrapped and replaced by a fresh investigation monitored by the Delhi HC; that the Delhi Police officers responsible for imprisoning innocents on the basis of a chargesheet that has nothing but “superfluous verbiage”, be punished. Above all, each of the persons forced by the Delhi Police’s vindictiveness and political bias to be in prison in these pandemic times, must be adequately compensated.