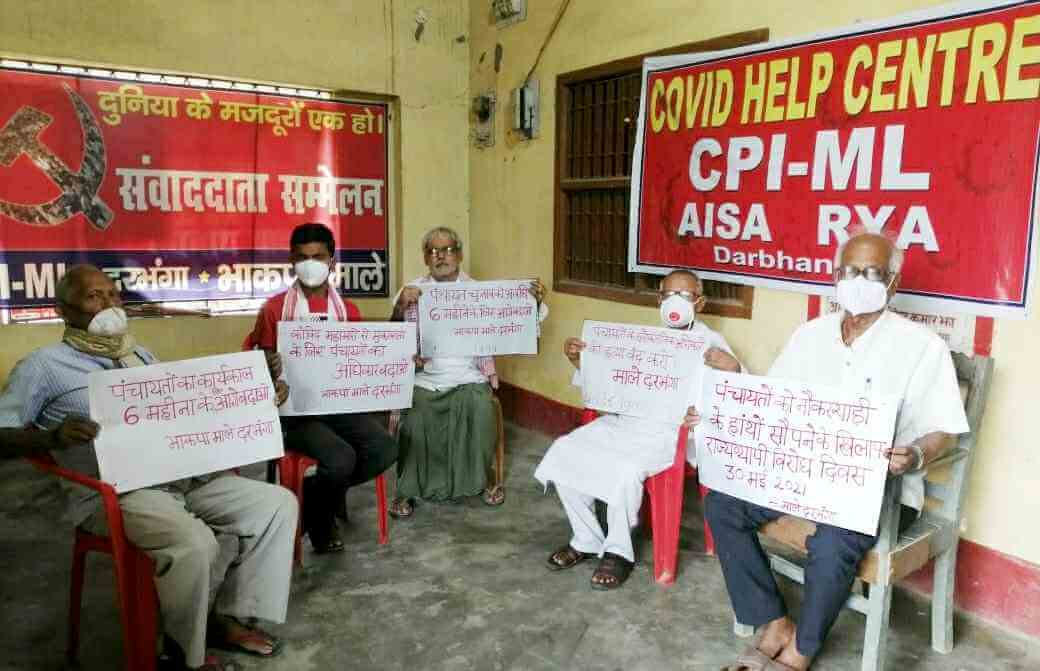 CPIML Bihar State Secretary Kunal said on 28 May 2021 that the current term for Panchayats is ending on 15 June. We have been consistently demanding from the Bihar government that in this hour of crisis the term should be extended for 6 months, but instead the government wants to hand over all Panchayat rights to the bureaucracy through an ordinance. This will prove a wholly suicidal step.

Comrade Kunal further said that as the health system has totally failed during the horrific 2nd Covid wave, we can overcome this tragedy only with extensive people's participation. But unfortunately the government is leaving everything to the bureaucracy and now even Panchayat work is being handed over to them. Not only is this an attempt to destroy democratic institutions, it is also a moot question whether the already overburdened bureaucracy will be able to shoulder this additional responsibility.

Panchayat representatives are persons who are directly connected with the people, and their role and experience is especially important in Covid-prevention and vaccination for all. Why then is the government not wanting to utilise this valuable resource? This is a system which could ensure time-bound completion of the vaccination process and run effective awareness campaigns from village to village, which is the need of the hour.

Our demand therefore is that instead of bringing an ordinance to hand over Panchayat work to the bureaucracy, the government should bring an ordinance to extend the current Panchayat term by 6 months and guarantee that credibility in democratic processes will be respected and maintained.

On CPIML’s call, statewide protests against the undemocratic decision to hand over Panchayats to the bureaucracy, took place on 30 May. Protests were held in the capital Patna as well as various District and Block HQs from homes and offices to demand that the government should bring an ordinance to extend the present Panchayat term by 6 months. The protest at the party state office was led by State Secretary Kunal.

Comrade Kunal said that during the present pandemic crisis it is crucial that the Panchayat term be extended by 6 months because Panchayat representatives are directly connected to the people and their role in prevention, awareness and vaccination drives is very important. Handing over Panchayats to the bureaucracy is a suicidal step and we condemn it as an undemocratic act. Instead, the government should bring an ordinance to extend the Panchayat term by 6 months and uphold the credibility of democratic process.