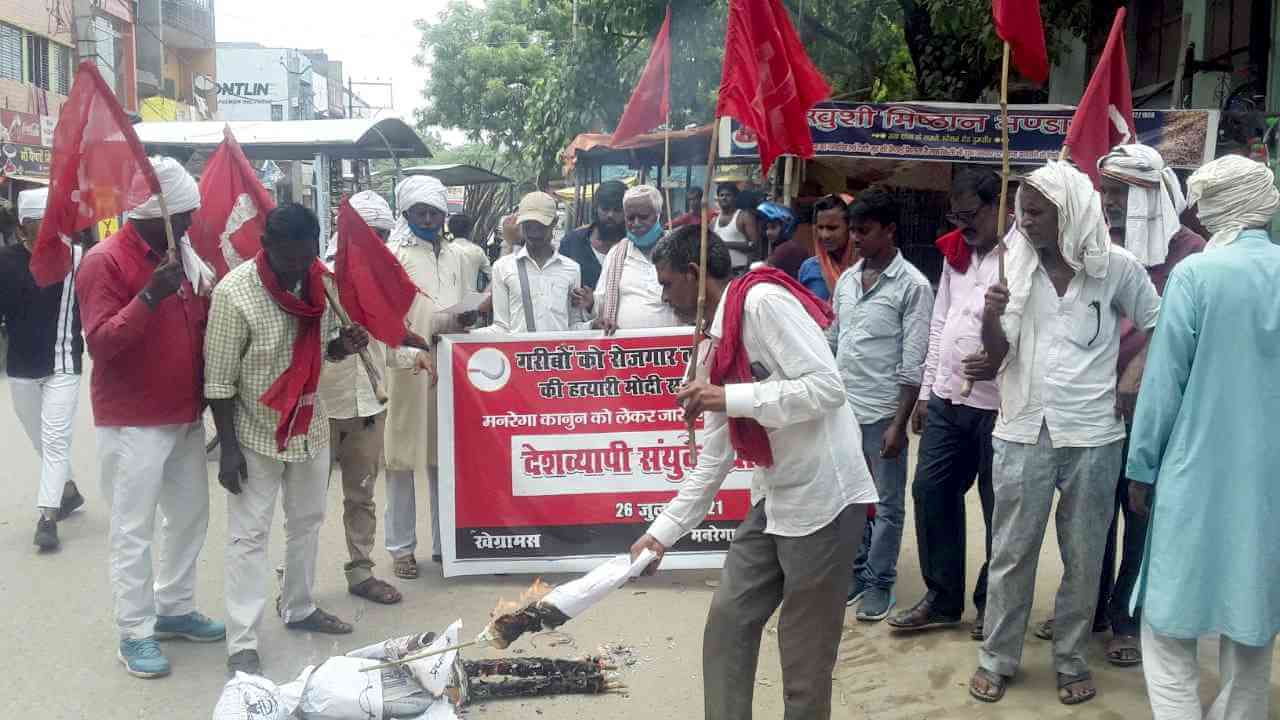 In a joint call given by several left rural labour organizations including AIARLA and MNREGA Mazdur Sabha protests were held on 26th July on district and block offices and the effigies were burnt of Prime Minister to assert the demand of giving 3 months MNREGA wages to all MNREGA and other workers in the rural areas considering rural distress resulting from Covid pandemic. The protests were held in all the states with the following demands:

In Delhi, a protest was held at Jantar Mantar, Parliament Street raising these demands. In a joint letter to the President of India, the organisations protested the central government advisory to divide MNREGA workers according to caste categories and disburse wage payments accordingly. The letter read, “This is in reference to File no G-31011/13/2020/RE (V)(371606), dated 2 March 2021 in the form of an advisory from Ministry of Rural Development to State Governments, concerning ‘disbursement of wage payment to wage seekers according to the category of SC/ ST and Others.’ We are very surprised to see the advisory. There is no rationale for division of workers into different caste categories who are entitled to the equal wages for equal work. This advisory will only adversely affect the payment of wages, delay disbursement and allotment of work.” The letter reminded the President that “The MNREGA is a universalized programme for any adult living in rural India who is willing to do manual work on the prescribed minimum wages. In a demand-based universal programme for provision of work, allocations can only be based on expected demand for work. Linking caste categorization with allocations will undermine the basis of the law which will also lead to segregation of beneficiaries on the caste basis which is against the proper and just operation of law itself. In fact, we are receiving information on how powerful elements are influencing the principle of equal opportunity and equal work to all irrespective of caste and gender. Already we have received information from different states that not only is there delay in the SC/ST payments, cases have come up of the wage given them being less in direct violation of the law. The social impact is already being seen in rural areas, where groups of workers are getting work on the basis of castes leading to MNREGA work sites according to the caste composition. There are studies which reveal that dalits are getting lower wages in MNREGA.”

The letter ended: There is a high demand for work under MNREGA. The return of migrant workers to rural India during last one year of pandemic has further increased this demand. The increasing transport costs, gas, electricity and essential commodities are also driving rural poor to levels of starvation. Therefore, we are requesting you to intervene in the matter for withdrawal of the advisory and to increase the number of working days under MNREGA to 200 days annually at wages of Rs 600 per day to ensure their survival.”