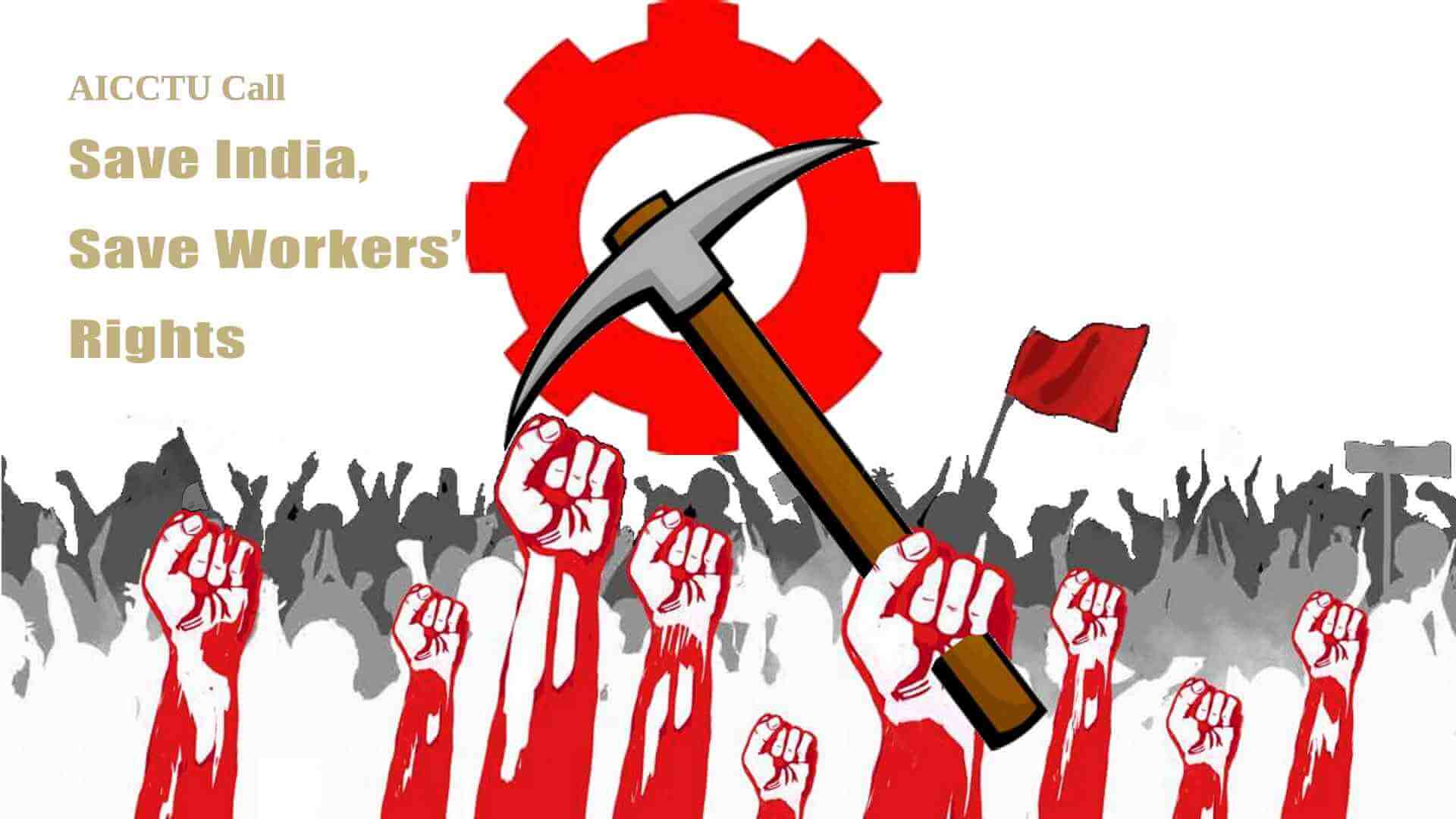 All India Central Council of Trade Unions has launched a countrywide Campaign from 1 to 9 August (Quit India Movement Day) and hold protest demonstrations against Modi-Shah regime. This aims at resisting the attacks on Democracy, Wages, Employment and Rights of the working class. AICCTU General Secretary Rajiv Dimri has issued the following statement for the campaign.

“The devastation and destruction has been the hallmark of Modi-2 Regime and the second wave of COVID has, due to criminal negligence of the government, turned into a catastrophe resulting in deaths of lakhs of Indian people. The Modi led government did not even care to provide compensation to the victims. There is an all-round destruction of livelihood of working people. Mass hunger, rising poverty and inequality and back-breaking price-rise cause further destruction of lives. Workers’ rights are being snatched away and are being pushed into slavery through enactment of 4 Labour Codes. Land from farmers is being systematically snatched and the Indian agriculture is being destroyed through enactment of 3 Farm Laws. Every piece of land and public sectors of the country are being sold to corporates. Every voice of dissent and protest is being stifled through draconian laws, like Sedition law, UAPA, etc. And the RSS brigade is burning the country with the fire of hate politics and communalism. All this characterise the Modi-2.0 Regime. In terms of devastation of the country, Modi-2 and Covid-2 have become synonyms.

“Covid-2 has proved to be the Modi-2 Regime-perpetuated slaughter of the people. When Indian people were dying for want of Oxygen, when dead bodies were floating in the rivers, the Modi-2 Regime was working overtime to capture West Bengal and to organize Kumbh Mela. And now, Modi-2 Regime has crossed all limits of shamelessness by announcing in Parliament that nobody died of unavailability of Oxygen. Further, the surveys have revealed that the actual tally of total Corona deaths are not less than 40 lakhs and have exposed the “official lies” of around 5 lakh deaths. The most needed precautionary measure now, the vaccination, is going on at a snail’s pace (just around 8% are said to be people fully vaccinated) making Modi’s catchphrase of ‘Vaccine Utsav’ a mockery. And while the raging pandemic has underlined the need for building a robust and free public health care infrastructure, the government is hell bent on providing super profits to corporates by privatizing vaccination.

“Even when the country was reeling under the pandemic, the Modi Regime was busy ‘converting crisis into opportunity’ in favour of its corporate friends. Pro-corporate Labour Codes and Farm laws were enacted and privatization of PSUs and government owned organisations and departments, including essential services, were ramped up. An Ordinance was also issued to crush the resultant dissent and the right to strike of workers - EDSO (Essential Defence Services Ordinance) – of not only in defence sector but potential enough to be used against workers in PSUs and also government sectors.

“The poor, the downtrodden and the migrants, reeling under hunger and destitution, wanted much-needed relief in the form of lockdown wages, allowances and free ration for the entire period of pandemic. But, instead of providing any meaningful relief to them, the Modi government, added fuel to the fire by increasing fuel prices (Diesel, Petrol, etc.), which, in turn, resulted in skyrocketing price-rise of food and other essential items. Modi’s Note-bandi induced destruction of peoples’ livelihood and now, with Covid-2, with insane, cruel lockdown and destructive policies, it has assumed grave dimensions with record Joblessness. Unlike first wave, most companies were running in the second wave, but not the public transport. Workers had to suffer a lot and more than a crore lost employment. Those who managed to reach work spot, with their own arrangements, had to incur an expenditure of Rs. 3000-5000 per month, which effectively reduced the wages of workers further. Retrenchment, wage-cut, starvation wages, 12-hour work day, precarious and irregular work, road-blocks against unionisation and protests, particularly against the most fundamental right, the right to strike, etc. have become the norm of the day and hitherto ‘illegals’ are being legalised through labour codes. The entire lot of frontline workers, exalted as Corona Warriors by the government, are being criminally neglected and refused wages and benefits in spite of the fact that they are sacrificing their lives in the fight against Corona.

“The undeclared emergency has become permanent and is termed as a new normal and has become a characteristic feature of the rule of Modi-Shah-BJP Regime. Hundreds of activists are languishing in jails under draconian laws, like Sedition law of colonial era, UAPA, etc., for raising voice and registering dissent against the policies of Modi-Shah Regime. Father Stan Swamy was a victim of this Raj of Draconian Laws and his death was nothing but a custodial murder at the hands of this Regime. And now, to control every branch of democracy, this Regime has resorted to hacking, tapping and taking control of phones of citizens including opposition leaders, journalists, activists, etc. as revealed in Pegasus spyware hacking scandal. Even as the demands of resignation of HM Amit Shah and independent investigation are being raised, the offices of newspapers and TV channels are facing Tax raids for covering the issues of Corona deaths and snooping.

“So, this is a gory state of affairs where peoples’ lives and livelihood, democracy and constitution have all been torn apart by Modi-Shah Regime. The worst ever challenge, since the country’s independence, is looming large over the working class, the common people and the country under this Regime. But the people are not lying down. There is a consistent battle between Modi-led corporate raj and the toiling masses. All sections of the working people are resisting and challenging this Regime and its destructive policies. Most notable among these movements is the ongoing 8 months-old, historical, relentless, determined farmers’ movement against farm laws. It’s time to build a decisive united peoples’ movement, basing on a strong worker-peasant unity, to overthrow the Modi led Company Raj.

Let us, on this great occasion of ‘Quit India Movement Day’, assert our great legacy of united peoples’ movement against the British Raj to free our country from the clutches of Modi-shahi and to achieve our cherished goal of building a peoples’ India.”