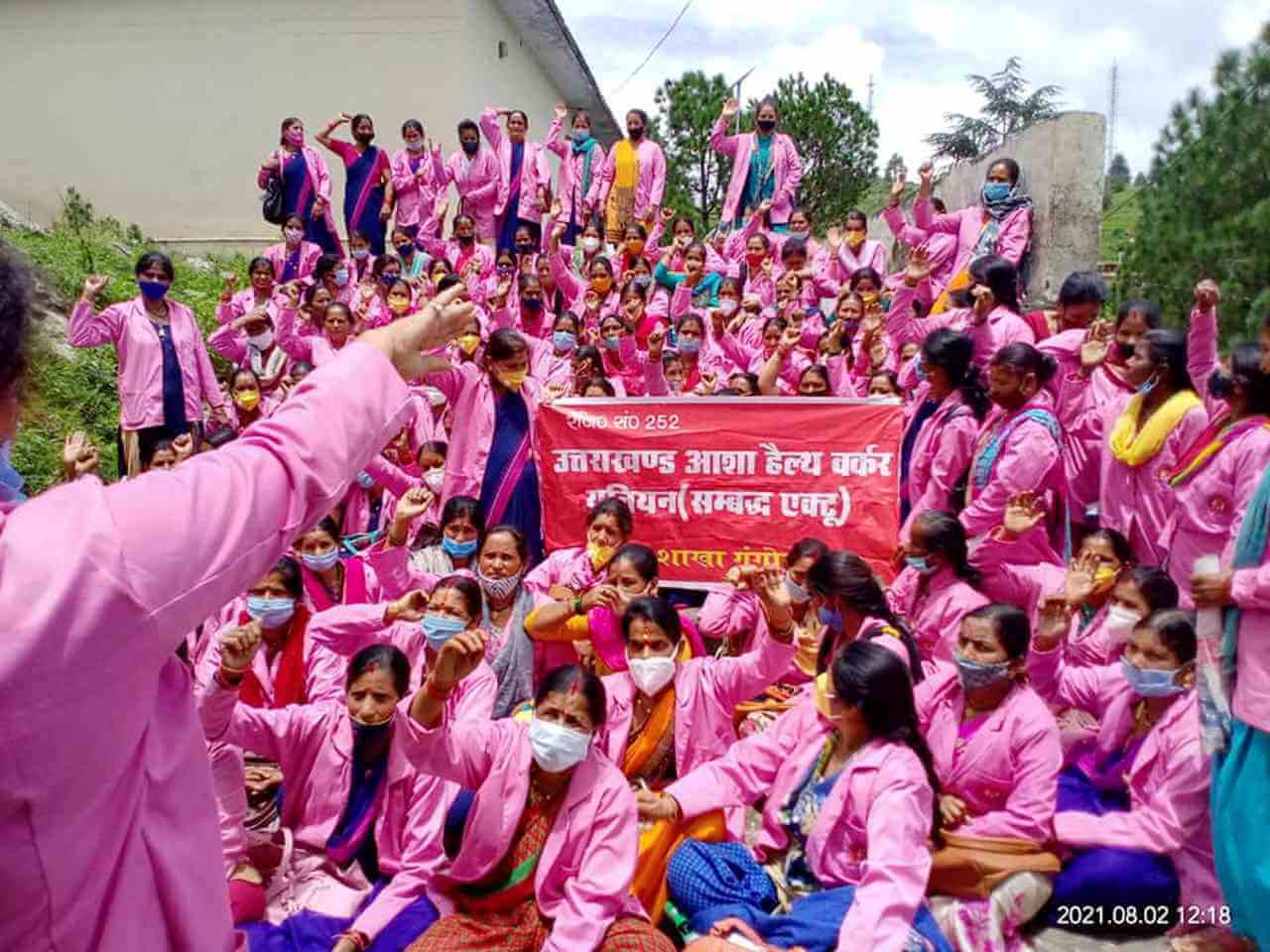 The movement by ASHA workers for monthly salary and other issues has reached the already announced stage of indefinite boycott of work due to the negligence and insensitive attitude of the BJP state government. Under the banner of Uttarakhand ASHA Health Workers Union affiliated to AICCTU, ASHAs boycotted work at Nainital, Udhamsinghnagar, Pithoragarh, Champawat, Almora, Bageshwar and other places and started the strike with resounding protests and dharnas. ASHA leaders said that the long pending demand of fixed honorarium (like Anganwadi workers) should be fulfilled immediately and other demands should also be heeded.

It should be noted that on 23 July 2021 ASHA workers had organized statewide Block level protests and submitted a memorandum to the Chief Minister but the government paid no heed. On 30 July protests were held at District HQs but still the government remained deaf and blind. Therefore ASHAs were forced to boycott work. Prior to this ASHAs have been consistently bringing their problems to the notice of the state government since its formation in 2017 but till date their demands have not been heard. Statewide work boycott and protests are being held from 2 August under the call given by Uttarakhand ASHA Health Workers Union affiliated to AICCTU and Uttarakhand ASHA Swasthya Karyakatri Union affiliated to CITU.

In a statement the Union said, how much longer will ASHAs be oppressed in the name of service? The struggle for rights, safety and dignity in Uttarakhand has reached a do-or-die stage. The movement is now united across the State. ASHA workers will remain on the streets for their wages and dignity until the government announces monthly salary for ASHAs. ASHA workers have organized this historic work boycott across the entire State and now this fight will end only after the government ends its oppression of ASHAs.

The Union further said that ASHAS, who are deployed primarily for mother-infant safety and protection, are being made to work for Covid, pulse polio, vaccination, family planning, dengue, malaria, ORS distribution and all kinds of surveys and campaigns. They do not get a moment to spare for their own families but the government does not pay them even a single rupee as monthly salary.

Demands raised by the ASHA workers include:

During the entire Corona period ASHAs were not provided with adequate safety kits and yet they put their lives at risk in order to do Corona duty. A large number of ASHAs and their families became infected with Covid. Uttarakhand ASHA Health Workers Union State President Kamla Kunjwal said in Haldwani that instead of making Anganwadis do the work of ASHAs, the government should pay ASHAs honorarium like the Anganwadis.

On the 6th day of the strike the Union said that the government, rattled by the ASHAs' movement, is trying to break the unity of ASHAs and is using the BJP's pocket organization Bharatiya Mazdoor Sangh for this purpose. Some ASHAs affiliated to BMS are being used to spread confusion among ASHA workers. ASHAs asked, “If the BMS was really concerned about ASHAs, why did they not resolve the ASHAs' issues with their double-engine government during the last four and a half years?

ASHA workers affiliated to Delhi ASHA Kamgar Union have sent revolutionary wishes and solidarity to the Uttarakhand ASHA Health Workers Union. The Union has thanked Delhi ASHAs for their solidarity.

After 8 days of continuing strike the Uttarakhand an ASHA Health Workers Union Delegation met Chief Minister of Uttarakhand on 9 August, led by Union State President Kamla Kunjwal, in Dehradun. In the talks with the Chief Minister, each demand in the ASHAs' memorandum was discussed in detail. The CM has assured them that a decision will soon be taken regarding honorarium for ASHAs and other demands, but the CM did not make any specific announcement and did not give any assurance in writing. The delegation announced that ASHA workers will consider ending the strike only after the government makes a written announcement of respectable monthly honorarium for ASHAs.