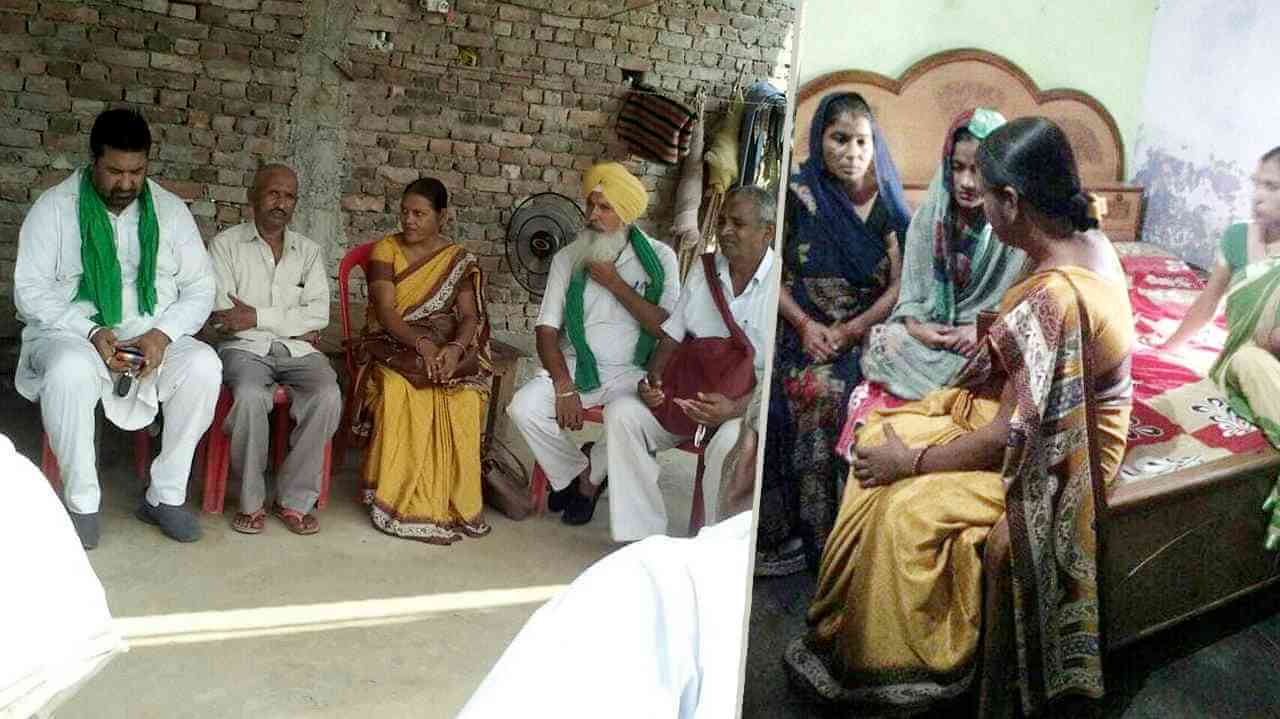 After meeting injured kisan leader Tejinder Singh Virk admitted in the Lakhimpur District Hospital and other injured farmers, the team went to the site of the incident where protests were going on with the victim farmers' bodies. The team paid tributes to the martyred farmers, net and spoke with their kin, the protesting farmers and local residents, and gathered details of the incident.

The martyred farmers' kin, protesting farmers and local residents told the team that on that day, 3 October, the UP Deputy CM Keshav Maurya and Union Minister of State and Lakhimpur MP Ajay Kumar Mishra Teni had a program in Lakhimpur. After the program Keshav Maurya was to go Teni's ancestral Tikonia in Lakhimpur Kheeri. When the farmers came to know this they decided to protest against the anti-farmer statement given by Teni and show black flags. It is noteworthy that Teni had said in a threatening tone, "10 or 15 men are sitting here; if we go there also, there won't be any place to run; we will set you straight in 2 minutes, I am not a mere Minister or MP or MLA. People who knew me before I became an MP know that I don't run away from challenges; and the day I decide to accept the challenge, you will have to leave not just Palia but Lakhimpur also...remember it".

The farmers and local residents told the team that Ajay Kumar Mishra Teni who has a criminal history and against whom a murder case is pending in the Allahabad High Court had made up his mind to 'teach the farmers a lesson' and it was under this scheme that the plan for this massacre was laid.

Details of the incident:

A large tranche of farmers decided to protest by showing black flags to Keshav Maurya and MoS Teni at the Tikonia helipad. Keshav Maurya was forced to change his route. As the day's succesful protest was concluding, Ajay Teni's son Ashish Mishra alias Monu came with a convoy of vehicles filled with armed goons and mowed down the farmers from behind, running them over ruthlessly. More than a dozen farmers including SKM leader Tejinder Singh Virk were seriously injured. A young farmer Gurvinder Singh caught hold of one of the attackers, for which he was shot in the head by Ashish Mishra. In all, 4 farmers died, 3 due to being run over and 1 due to being shot. The team members saw the bullet entry wound on Gurvinder Singh's right temple. The team members were told that when the attackers were surrounded by the farmers one vehicle turned turtle and 3 attackers were injured, whom the farmers caught and handed over to the police. Later they came to know that these 3 attackers died. The team came to know that journalist  Raman Kashyap was also crushed to death by the attackers' vehicles.

The CPIML team addressed the protest meeting at the site and expressed solidarity with the struggle and demanded, along with the demands made by SKM, UP CM Yogi Adityanath to step down from CM post. The team stayed on the spot till an FIR was registered, Rs 45 lakhs compensation was announced and the bodies of the martyred farmers were sent for post-mortem.