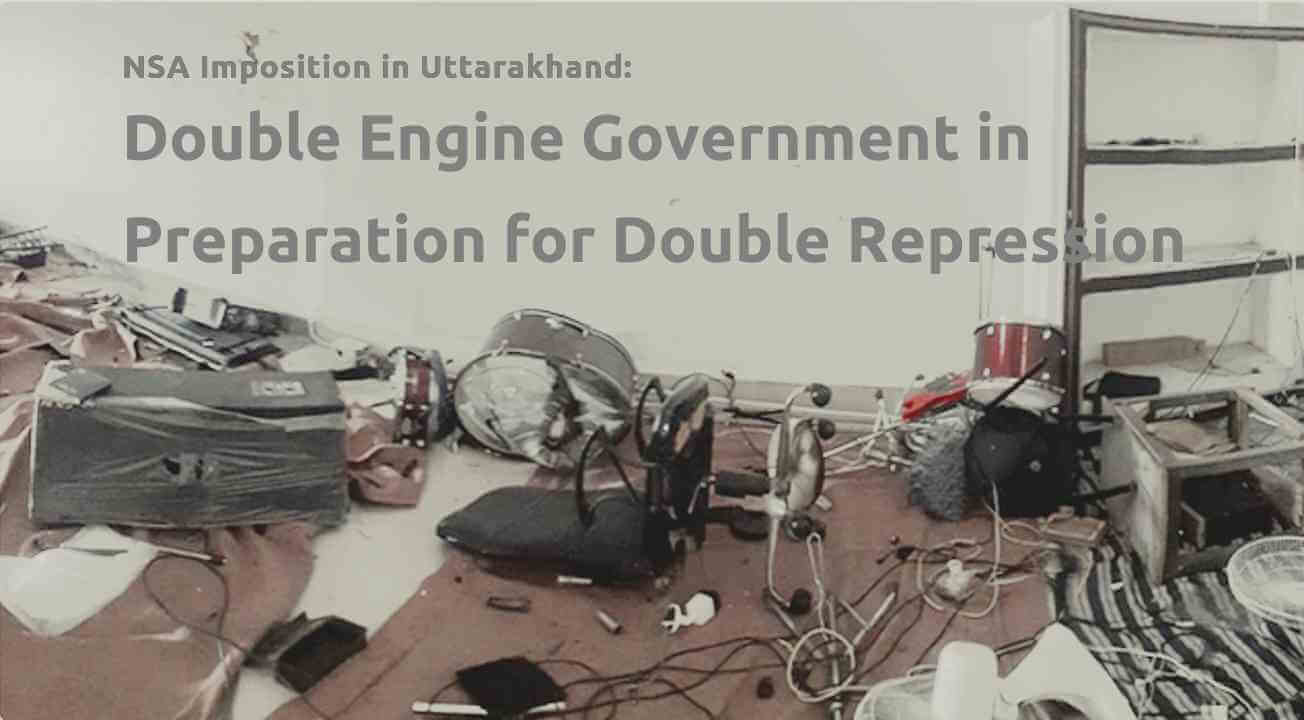 The 3rd Chief Minister in four and a half years of BJP's double engine government in Uttarakhand, Pushkar Singh Dhami has done one job with great asperity: he has pasted the state over with his own hoardings and banners. One hoarding prominent among these boasts that Uttarakhand ranks first in law and order in the Niti Ayog's SDG index.

We were reminded of this hoarding on 4 October when the government clamped down the National Security Act (NSA) in the entire state for 3 months till 31 December. This is unprecedented; we cannot remember such an order even in states where the law and order situation was in bad condition.

The order notice says that NSA has been invoked as there is the 'possibility' of violence breaking out in various places in the state. If that is the case, how does it square with Uttarakhand being 'Number 1' in law and order? Both cannot be true.

Who is perpetrating the violence that has been cited as the cause for clamping down NSA across the entire state? It is the BJP people who are engrossed in inciting communal passions. The day the NSA order was issued, BJP people vandalized and committed violence inside a church in Roorkee. No action was taken against them but a case was registered against the church authorities under grave sections. The first question is, why did the BJP people break the CCTV camera in the church? Who gave them the right to take the law into their own hands? Will the Chief Minister invoke NSA against the people who perpetrated violence inside the church?

The government order authorizes the use of the following powers under Sub-section 3 of Section 3 of NSA1980:

1. Any person considered to obstruct the law or essential goods or services can be arrested by the Central or State government.
2. If the state government feels that such conditions may prevail in any District in the state, it can give similar rights to the District Magistrate or Police Commissioner.

This is what has been done in Uttarakhand. All DMs have been given this right for 3 months, as the Act says that this can be done only for 3 months initially.

Interestingly, black marketing under the Essential Services Act is one of the bases for invoking NSA, but the Modi government has already given a lot of room to black marketers and there is no question of taking action against them.

What is the difference between arrest under NSA and arrest under other laws?  Generally it is mandatory to tell the arrested person the reason for his arrest. But under NSA the reason for arrest may be told to the person within 5 days, and in exceptional cases within 15 days. Section 5 of NSA says that an arrest order will not be illegal or ineffective even if the order is vague, non-existent or not relevant. In other words, the government can arrest any person even without any basis.

Usually governments invoke Section 144 to prevent incidents or protests, under which 5 or more persons cannot gather at one place. But using NSA in place of Section 144 amounts to using a canon instead of a knife. Someone should explain the difference between Section 144 and NSA to the Chief Minister of Uttarakhand!

However, It does not seem as if NSA has been invoked out of ignorance. The aim of the Uttarakhand government is to repress people's protests as ruthlessly as possible. The double engine is preparing to unleash double repression on the people of Uttarakhand!