Why Is The Modi Regime Unable To Protect Civilians From Terrorists In Kashmir? 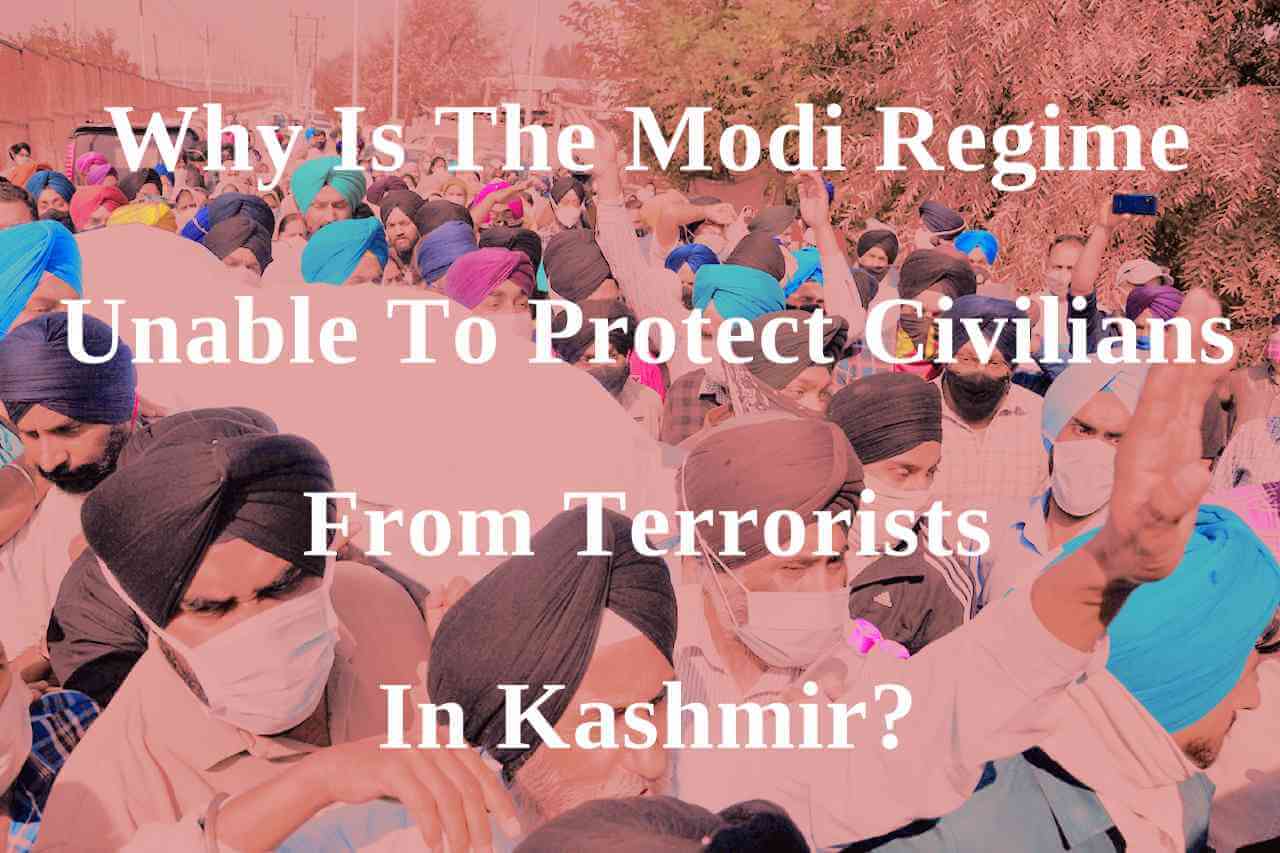 In the six days since 2 October 2021, seven civilians, four of whom belonged to Hindu or Sikh minority communities and three of whom were Kashmiri Muslims, were killed in the Kashmir Valley. A new terrorist outfit calling itself “Resistance Front” claimed responsibility for the killings. In 2021, 28 civilians have been killed by terrorists; of whom five belong to the Kashmiri Pandit or local Sikh communities and 2 were Hindu migrant labourers from Bihar. This spurt of terrorist activity targeting civilians and minorities in the Valley is deeply disturbing. Why is the Modi Government that has controlled the Kashmir Valley since the abrogation of Article 370 in August 2019, unable to protect civilians and minorities from terrorists?
The Modi regime, rejecting all sane counsel, had insisted that the forcible abrogation of Article 370 would end terrorism in the Valley – instead what we have is a fresh wave of terrorism targeting civilians. Now the Prime Minister cannot pass the buck – it is he and his administration alone that must answer for why Kashmir’s minorities and civilians are left exposed to terrorists.

Communal violence and terrorism targeting minorities is at its peak all over India. Hindu-supremacists are targeting Muslim vendors during the Navratri season; Muslim students were forcibly evicted from “garba” celebrations at their college in MP; Christians were beaten up by Hindu-supremacist outfits in MP; Yati Nasinhanand continues to harass Muslim children on video at his temple premises in Dasna, Ghaziabad; a Hindu supremacist mob attacked and sought to evict the lone Muslim family in Pewda village near Indore; a young Muslim man Arbaaz was beheaded by a terrorist group called Sri Rama Sena Hindustan; Muslims were attacked in riots in Kawardha, Chhattisgarh; a Muslim youth was lynched to death in Shamli in UP – every day there are new incidents to add to the list.

The massacre of farmers at Lakhimpur Kheri is also no less an act of terror, where a Home Minister’s son mowed down protesting farmers with his SUV. And women students protesting at the Home Minister’s residence to demand that the accused Minister be sacked, were subjected to sexual violence by Delhi Police personnel. Who but Home Minister Amit Shah and PM Modi are responsible for such atrocities?

Ironically, speaking at the 28th Foundation Day of the National Human Rights Commission, PM Modi chose to attack human rights activists, accusing them of “selective outrage.” The fact is that his Home Minister Amit Shah selectively excludes Muslims from the category of “human”, by calling them “termites”. And whether it is Kashmiri Pandit and Hindu/Sikh minorities in Kashmir or Muslim minorities all over India, the Modi regime and the BJP violates their rights. The police and armed forces of India have become a byword for custodial torture, custodial killings, and violations of human rights and civil liberties.

In what will be remembered as an obituary for the NHRC in India, the NHRC Chairperson Justice Arun Mishra used the occasion to praise PM Modi saying “It is because of you that a new era has now begun in J&K.” If the Chairperson of India’s human rights body is issuing such statements over the political institution he is supposed to be monitoring, it only shows that the NHRC has been reduced to a puppet. International institutions like Amnesty International have been evicted from India by the Modi regime which has also imprisoned leading human rights defenders like Sudha Bharadwaj and Gautam Navkakha under the draconian UAPA law.

The need of the hour is for people to unite and rebuff the communal and divisive forces and hold the Modi regime accountable for terrorism and violation of rights. The BJP must not be allowed to use the killings in the Valley to spread hatred against Muslims or to seek approval for its suppression of rights in the Valley.