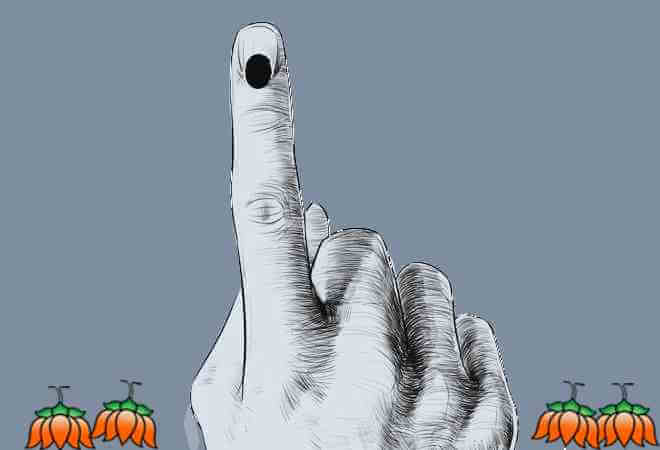 Results of the October 30 bypolls held in three Lok Sabha seats and twenty nine Assembly constituencies spread over thirteen states and the Union Territory of Dadra and Nagar Haveli give us a glimpse of the changing political climate of India ahead of the crucial Assembly elections early next year. Usually bypolls tend to favour the governments in power, but the bypolls sprang several surprises, the most stunning being the results in BJP-ruled Himachal Pradesh where the Congress bagged all the three Assembly seats and the lone Lok Sabha seat for which bypolls were held. For the BJP, perhaps the most significant gain came from Telangana, where the BJP has managed to increase its strength by fielding a TRS defector as candidate.

The other state where the BJP gained immensely is Assam where the party and its ally UPPL won all the five seats that had bypolls. Four of these seats had been won by the Congress and its allies, AIUDF and BPF, during the general elections held earlier this year. The continuing growth and consolidation of the BJP and its allies in Assam and other states of the North-East poses a major threat to peace, social harmony and human rights in this region with great demographic and cultural diversity. In complete contrast to Assam, the BJP lost all four seats in West Bengal by massive margins, including the two seats it had won in the Assembly elections. Even though the BJP finished second, Left votes improved marginally in two constituencies in Nadia (Shantipur) and North 24 Parganas (Khardaha).

While mainstream media analysis tends to explain the BJP defeats, and narrow victories won by its ally JDU in Bihar, in terms of 'sympathy' for deceased leaders, the anger against the Modi government and the BJP's disastrous policies and divisive politics was quite palpable and contributed hugely to its defeats in Himachal, Haryana and Rajasthan. Even in Karnataka, the party lost a seat in the current chief minister's home turf. The lethal combination of skyrocketing prices of essential goods and services, vanishing jobs and falling income has perhaps been the biggest popular concern in the bypolls. The way the Modi-Yogi-Khattar regimes have sought to crush the farmers' movement and demonise the protesting farmers, has only added to the people's anger.

This general message of growing popular anger against the BJP and the determination to defeat it in the elections is the most important takeaway from the bypolls. To channelize this anger into powerful mass struggles and convert it into effective opposition in the electoral arena remains the most important task ahead of the crucial Assembly elections in early 2022. In Uttar Pradesh, Uttarakhand and Punjab, the elections will be a great opportunity for the ongoing farmers' movement to secure its political objective of punishing the anti-farmer Modi regime and thwarting the divisive, disastrous politics of the Sangh-BJP brigade. Effective opposition unity remains an added challenge in this regard. The split in the Bihar alliance with the Congress and RJD both fielding candidates in the two constituencies was an unfortunate development. Even though the Congress polled less votes than the eventual winning margin of the JDU over RJD, the split clearly sent out a wrong message.