We the People of India - 75 Years of Independence 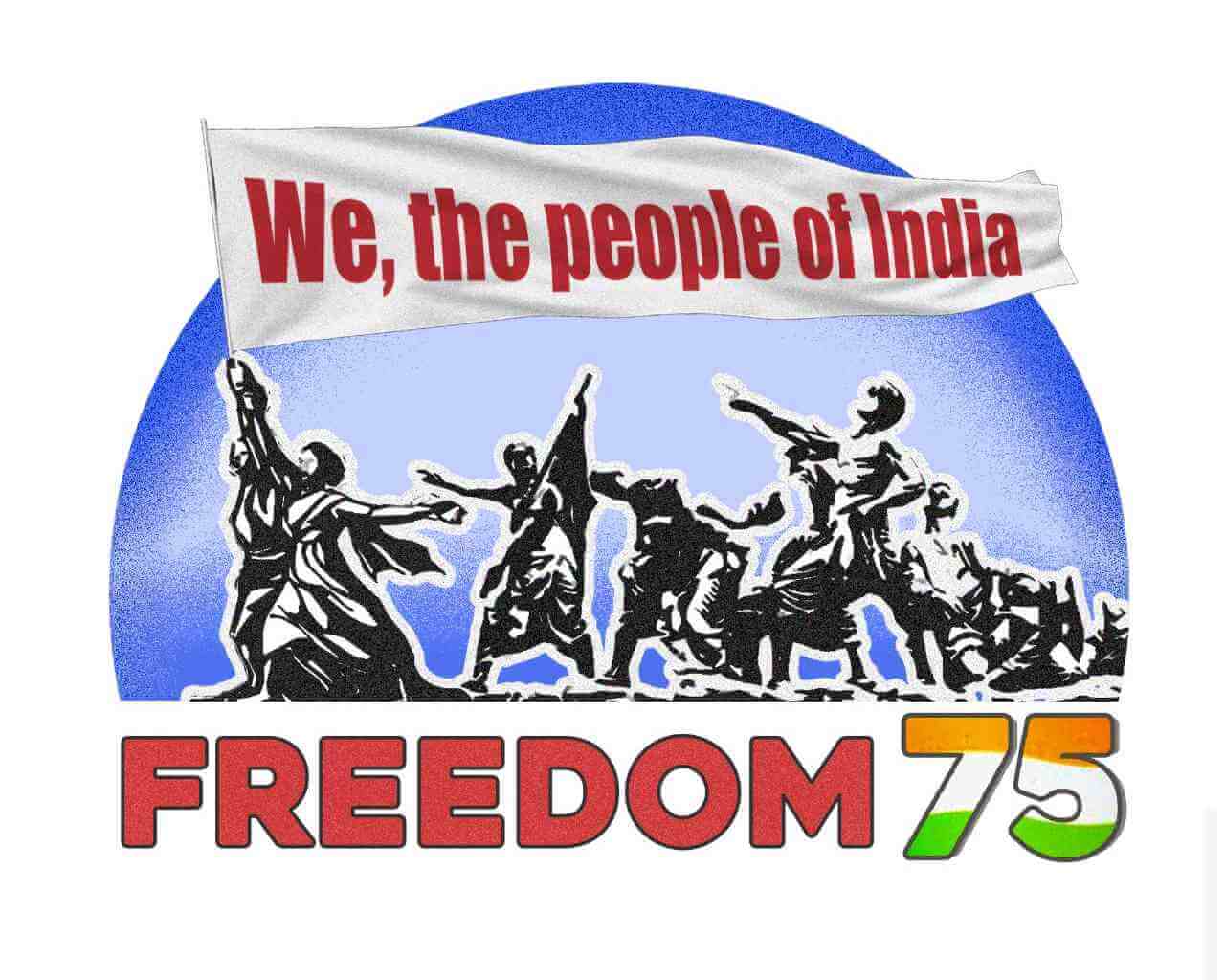 The Indian freedom struggle was a huge and significant one of its kind in the history of the world, bringing with it many important changes. This struggle by various sections of society against a system of colonial oppression lasted for about 200 years and was centered around the dream of building a new and modern India. Crores of people were part of the movements during the period between the first freedom struggle in 1857 to the Quit India Movement in 1942. Lakhs of people were arrested and thousands martyred but the people continued fighting--this is the golden period of our history.

Several streams were active during the movement for independence. While the Congress led by Mahatma Gandhi emerged as the representative of mainstream nationalism, there were also many other strong voices. The farmers' and workers' movements, revolutionaries' and communists' struggles, equal participation by women and minorities on all fronts, awakening of the dalit community, and relentless struggle by adivasis--all these streams wanted freedom from colonial oppression as well as oppression and slavery at the social level. Indian society had deep internal tensions and there were also differences and disagreements concerning the objectives of independence. Despite this, when the country became independent in 1947 it declared unity, secularism and democratic values as its foundation. Independence came with the pain of partition but the roots of our composite culture were so deeply entrenched in the freedom struggle that independent India was declared a secular nation. An intense transformation in the country's socio-economic landscape was the need of the hour. Despite leaders like Bhagat Singh, Gandhi and Ambedkar and the social movements during the freedom struggle, socio-economic oppression of dalits, adivasis, women and other marginalized sections continued. Giving farmers land rights and workers a life of dignity--this was a task that still remained to be done.

Along with the rise of Indian nationalism, the rise of communal elements was the weakest link in the national movement. The British learnt from the 1857 freedom struggle that in order to rule this country they had to practise the politics of dividing Hindus and Muslims. The unprecedented Hindu-Muslim unity in 1857 had almost thrown the British out of the country. In 1888 Viceroy Dufferin, with the intent to divide the Muslims, said that he considered 5 crores Muslims to be a backward community. After 1870 Hindu resurrectionists, Savarkar, Hindu Mahasabha and RSS played their politics around the Two-Nation theory and not only distanced themselves from the freedom struggle but their leaders even wrote apologies to the British, evidence of which is available today. But the freedom movement was so strong that divisive elements could never make a significant place for themselves during that period.

It is ironical that today when the country is moving towards its 75th year of independence, it is the communal ideology which is in the seat of power and wants to use its power to change the face of the freedom movement. All accepted standards of writing history are being flouted openly and facts are being twisted. In this situation, the true celebration of 75 years of independence would be to re-establish the dreams and values of the independence movement. An initiative in this direction has been taken by CPIML where a people's campaign '75 Years of Independence' is being launched for 2 years with the participation of masses, historians, intellectuals and social workers. Through this campaign we can also challenge the conspiracy by the ruling pro-imperialist-corporate communal-fascist forces to infiltrate into our country's freedom struggle, tamper with it, and poison people's minds with communal venom in the name of the freedom struggle.

We know that the social ideas of Shaheed Bhagat Singh, Ambedkar, Periyar, Jyotiba Phule, Savitri Bai Phule, Fatima Shaikh and others are very important for us. The working class, farming community, adivasis, women, and minority community had also played a very important role in the national movement.

Collecting materials related to the freedom movement from people, archives, oral history and other sources and documenting them, campaigning at the grassroot level through pamphlets and leaflets, poster exhibitions, poetry readings, film screenings, collecting and preparing cassettes of freedom movement songs, organizing social media campaigns, and constructing memorials and parks in selected areas--these will be some of the ways in which we carry forward the campaign.

The campaign will begin with a convention organized at the Bharatiya Nritya Kala Mandir, Patna and a memorial meeting on 18 November at Jakkanpur in Patna on the occasion of Batukeshwar Dutt's birth anniversary.

To bring out the history of the activists in Gandhiji's Satyagraha Movement, especially Shekh Gulab, Batakh Miyan and others, and to document the peasants' movement against the zamindars that continued even after Gandhi left.

To make a list of the martyrs (about 500 martyrs) who were killed in the 1942 movement and build a memorial to them, and to bring out the history of the parallel government (Badh-Badahia) formed in Bihar.

The spirited adivasi movement in undivided Bihar is a golden page in our history. It is our aim to bring to light the history, especially the hitherto untouched aspects, of the adivasi movements in the Bhagalpur-Purnea regions.

To document the historic peasants' movements that took place in Shahabad, Magadh, Saran and Mithila and to reconstruct the Yadunandan Sharma Ashram in Gaya.