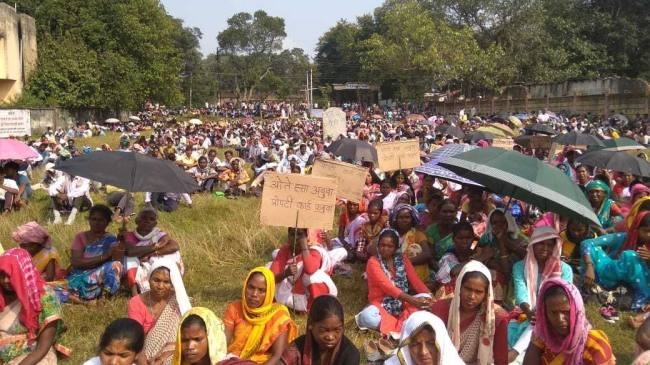 Adivasis in Jharkhand are opposing ongoing survey being done at the behest of the central government of lands of tribal, indigenous and local farmers without taking into account concerns of local people. The survey being done in Khunti district through drones is meant to undermine ownership or property rights of adivasis. Adivasi Sangharsh Morcha National Conveners Devakinandan Bediya and Jagannath Oraon participated in a dharna in front of the Jharkhand Governor on 14 December which was organised by Gramin Adivasi Moolvasi Astitva Raksha Manch, Mundari Khuntkatti Parishad, Adivasi Ekta Manch and the Gram Sabhas to raise the following demands:

1. The Central government is ignoring Gram Sabha and farmer-adivasi organizations' demands and conducting a drone survey of traditional adivasi-majority Khunti District to issue ownership/property cards by the government. This should be immediately stopped.

2. The new ownership scheme started by the Modi government to benefit corporate houses and capitalists should not be implemented in Jharkhand.

3. Rights provided to the Gram Sabha by the CNT-SPT Act, Mundari Khuntkatti and 5th Amendment should be strictly implemented.

4. The Raghuvar government included gair-majrua aam and gair-majrua khas lands in the land bank. This land-bank should be cancelled.

5. Provide lift irrigation facility so that water from all water sources including rivers and ponds reaches farmers' fields through pipelines.