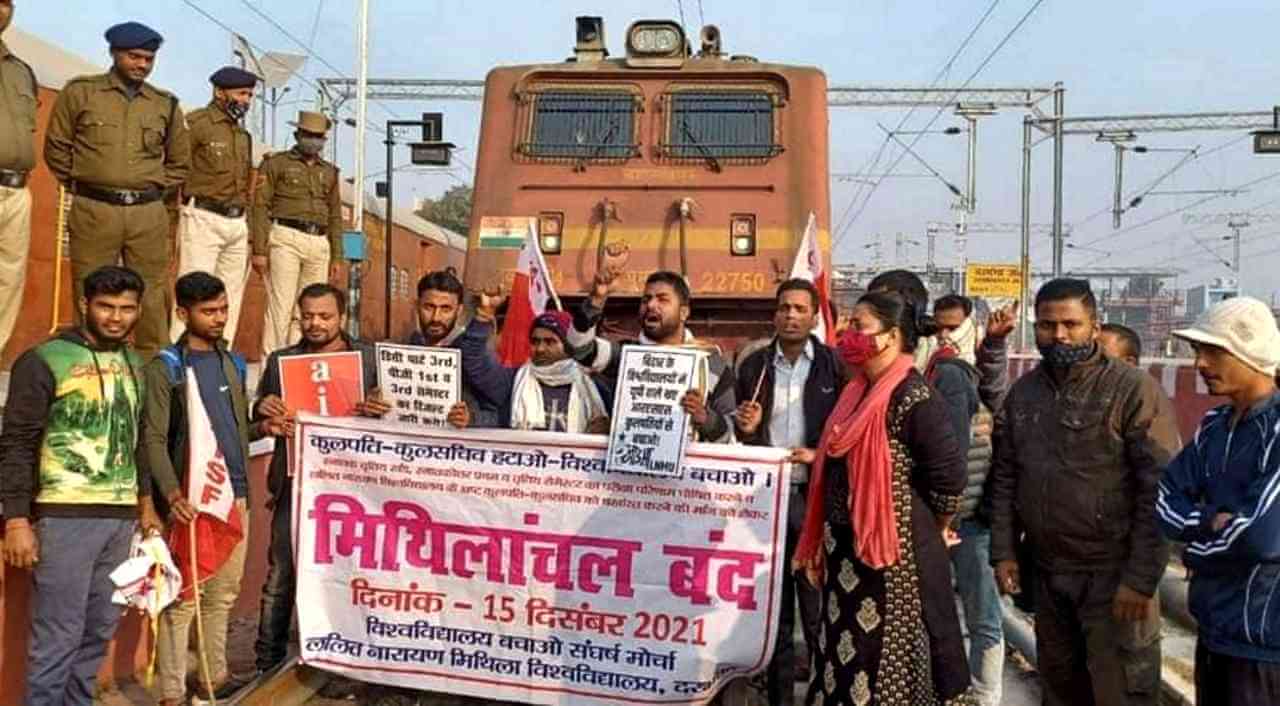 Hundreds of angry students under the banner of 'Vishwavidyalaya Bachao Sangharsh Morcha' organized a Bandh on 15 December 2021 in Samastipur, Darbhanga, Beguserai and Madhubani Districts of Mithilanchal in Bihar to demand the dismissal of the corrupt VC and Resistrar of Mithila University.

During the Bandh educational institutions and markets were closed in district headquarters and other cities and towns.  In Samastipur AISA, SFI and AISF organised a march from Stadium Golambar, raising slogans for the dismissal of the scam-tainted VC and Registrar of LNMU,  dismissal of the Governor responsible for the scams and grave anomalies in all universities in Bihar, high level judicial probe into University scams, and for declaration of UG and PG results. The marchers blocked the Musari Gharari-Darbhanga road for some time. The students got good support from political activists also for their demands. Candidates going for exams and ambulance services were given exemption during the road block.  Long lines of vehicles got lined up on both sides of the road due to the jam, and police were present in large numbers. A meeting was organized at the road jam site itself.

Addressing the gathering, AISA State Vice-President Sunil Kumar said that student organizations are agitating relentlessly to save universities from the corruption and academic-administrative anarchy by corrupt Vice Chancellors and  Registrars but so far no action has been taken by the government against the Vice-Chancellors and Registrar who are involved in corruption.

The corrupt policies of the Vice Chancellor and Registrar of Lalit Narayan Mithila University (LNMU) have destroyed the future of thousands of undergraduate and postgraduate students. Hundreds of such students are frequenting the campus every day to enquire about university exam results. Due to non-declaration of graduation results students are worried that they will not be able to pursue further studies in other state and central universities. The meeting was also addressed by SFI District President Avanish Kumar, AISF District President Sudhir Kumar, AISA leader Surendra Prasad Singh and CPIML District Secretary Prof Umesh Kumar. The speakers said that students would carry forward their movement with determination and courage and would not relent till corruption and loot are rooted out from the universities of Bihar.