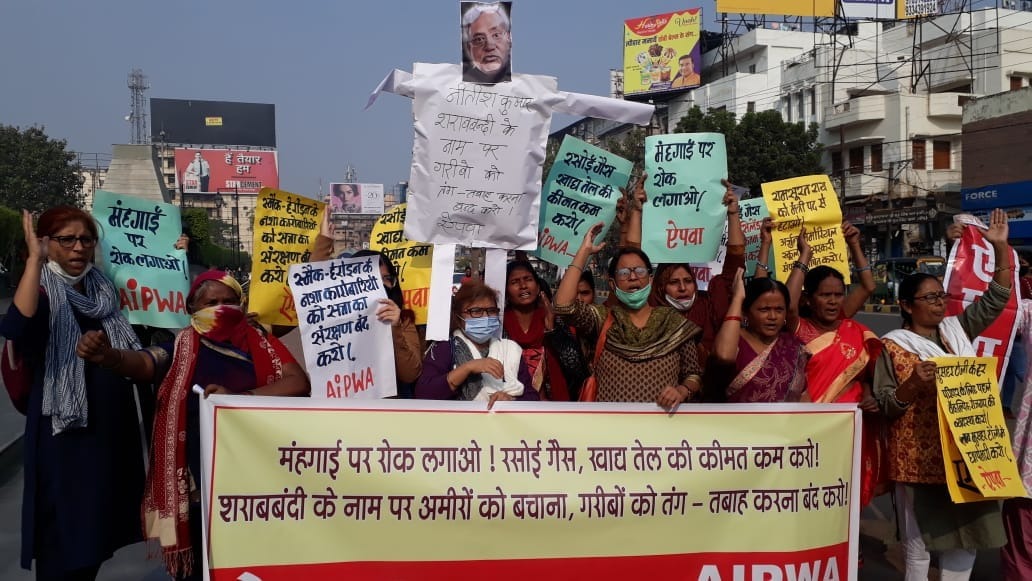 The All India Progressive Women’s Association organised a campaign in Bihar highlighting the following issues.

Today every family is weighed down by inflation and spiralling prices. In 2019 Modi sought votes in the name of free cooking gas. As we know, nothing comes for free! Indirect taxes from the poor and direct as well as indirect taxes from salaried people are meant for the government to spend on just such welfare schemes. But under Modi Raj everything is moving in the reverse direction. Adani-Ambani are rolling in money while the poor are being turned into paupers. Presently, as international oil prices go down and under pressure from 5 imminent state elections, petrol-diesel prices will be reduced slightly, but for how much relief is that going to provide? How can women afford Rs 1000 for a gas cylinder? How can they arrange for basic necessities like mustard oil, milk, vegetables and foodgrains, which have become unaffordably exorbitant?

These days the Nitish-BJP government in Bihar is talking a lot about prohibition. But women have not forgotten how Nitish Kumar had liquor shops opened at every nook and corner during his first term, saying, if we don't sell liquor where will the government get money from? Prohibition has been one of the demands of Bihar's women and they have organized movements for this. But it is always the poor who are ruined, sometimes through liquor, sometimes through prohibition.

Recently there has been a spate of painful liquor-deaths in various Districts of Bihar. As such deaths have been occurring prior to prohibition as well as post-prohibition, why is the government running away from its responsibility? Instead of removing the prohibition Minister, the poor, especially dalits, are being dragged into jail and marriage venues are being raided to divert attention away from the liquor mafia.

Thousands of litres of liquor had been confiscated from BJP Minister Ramsurat Rai's school and his brother Hanslal Rai's pick-up van and other vehicles (Bochaha Thana Case No. 2-298/20) but after winning the election Ramsurat Rai was rewarded with a ministerial post and his brother Hanslal Rai did not go to jail for even a single day, having got anticipatory bail. All their other relatives who were caught loading and unloading liquor also got bail. Their school has not been declared as government property till date!

Today the drugs business is flourishing in Bihar and trapping young boys and girls. Everyone is aware of this. The police are fully aware who the drug dealers are earning billions, but they are powerful people and so they remain unscathed. Instead of acting against them, the Nitish government is raiding Musahar Tolas where country liquor is produced and destroying the foodgrains and property of these dalit poor communities. As already raised by AIPWA the question is, if these poor communities who are liquor producers by tradition are not provided with other means of livelihood, how can they sustain themselves and their families.

How many de-addiction centres has this government set up during its rule? How many psychiatrists have been appointed? How many new hospitals have been opened in Bihar? AIPWA has decided to raise its voice on these issues and shall organize a campaign on these issues from 3 December to 10 December. AIPWA raised following demands during the campaign:

3.  Provide alternative livelihood arrangements for every family in Musahar Tola, and then only conduct raids there.