CPIML organised protest marches against communalism at various places across the country on 6 December Dr Bhimrao Ambedkar Mahaparinirvan Diwas and Babri Masjid martyrdom day. After the BJP came to power, democracy and secularism are in grave danger in the country. Minority communities are being constantly targeted and hatred against them is being spread across the country. Hateful efforts are on to destroy our composite culture and inflict fascism on the country. Therefore CPIML appealed to the peace-loving, democracy-loving progressive people from all walks of life to join in the anti-communalism march on 6 December to save the Constitution, democracy and secularism.

BJP-RSS have no moral right even to take the name of Dr Bhimrao Ambedkar, the chief architect of our Constitution. Everyone knows that these people want to do away with the Constitution. Democracy and secularism are the soul of our Constitution, but under Modi raj while democracy is continuously under attack, in the current session of Parliament BJP unsuccessfully tried from backdoor to bring a Bill in Rajya Sabha to remove the word Secularism from our Constitution. The Constitution gives the citizen rights and responsibilities but the Prime Minister in his speech on 26 November said that there is too much discussion going on about rights. This is not correct. The reality is that fascist ideology is bent on doing away with the Constitution and bringing the Manusmriti in its place.

Anti-communalism marches were organized across states to protect the country's composite culture and against the politics of bigotry and violence rampant in the country, vitiating communal harmony, the call to turn Kashi-Mathura into another Ayodhya and the conspiracy to change the Constitution.

CPIML leaders addressing the meeting said that RSS deliberately chose 6 December as the day to demolish the Babri Masjid. This day is the Mahaparinirvan day of Dr Bhimrao Ambedkar, the architect of the Constitution of India. Clearly, in attacking the Masjid they also attacked the Constitution. It is unfortunate that the fascist forces guilty of the Babri demolition did not receive any punishment from the courts. It is the people of the country who will now teach a lesson to these fascist forces. Today BJP-RSS are bent on replacing the Constitution with the Manusmriti. They are cutting down whatever rights we had, and imposing fascism on the country. CPIML will carry on a relentless struggle against these fascist forces.

It is a well-known fact that Hindus and Muslims fought shoulder to shoulder for India's independence whereas the RSS kept itself away from the struggle for freedom from the British. They betrayed the freedom movement then, and today they are trying to falsify, twist, and rewrite history. The historic farmers' movement against the 3 black farm laws has proved that today also Hindus and Muslims are together fighting fascism, and they will not let the conspiracy to impose Manusmriti on the nation succeed.

The leaders speaking at the meeting called on the people to wage a decisive struggle to safeguard the values and dreams that emerged from the freedom movement. Marches against communalism were also organized at Betia in Western Champaran, Dumraon in Buxar, Arwal, Darbhanga, Ara, Samastipur, Rohtas, Masaurhi and other Districts. 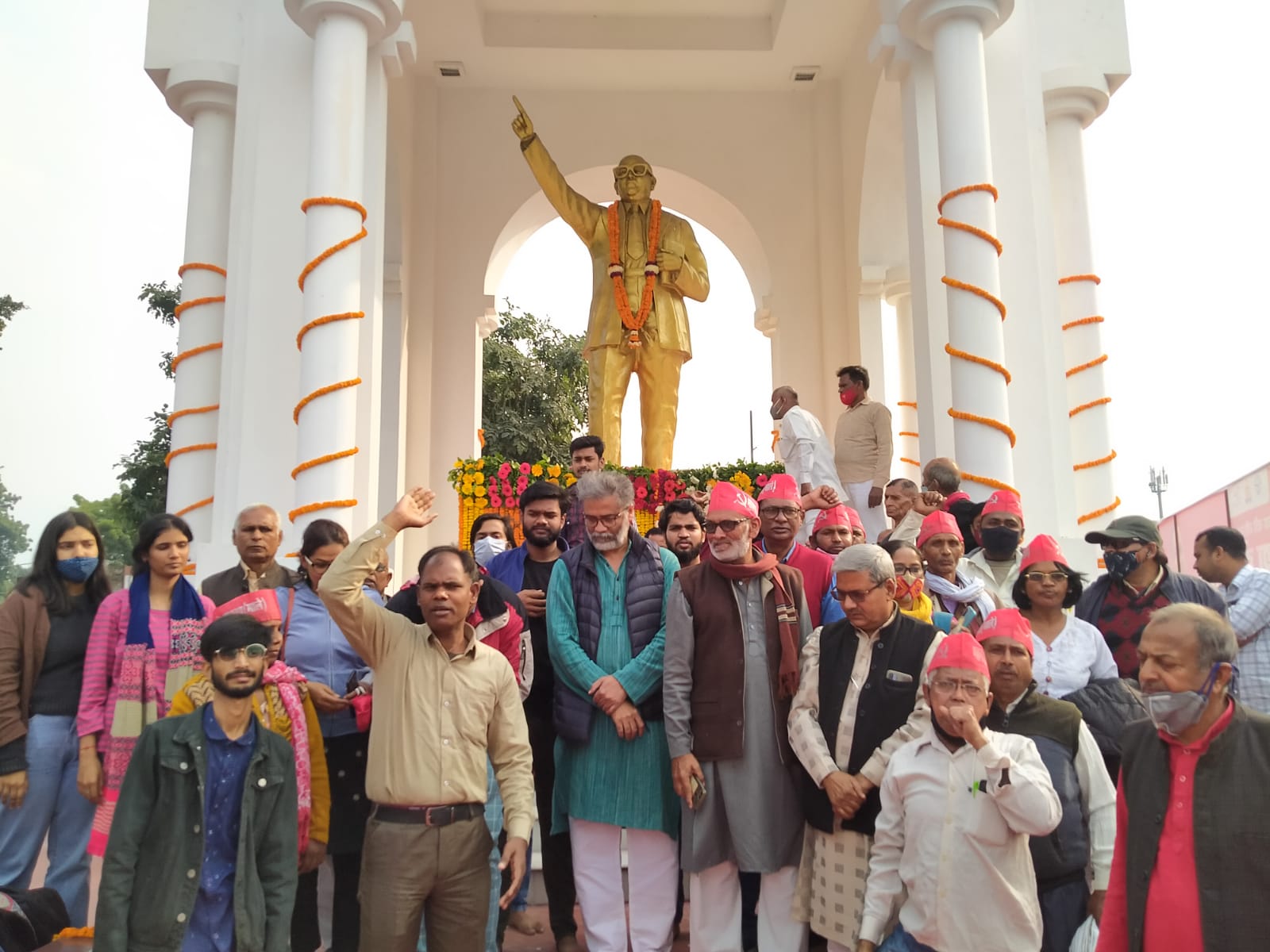 CPIML General Secretary Dipankar Bhattacharya garlanded the statue of Dr Ambedkar at the Hazratganj Chowk in Lucknow and paid him tribute. Speaking on the occasion, Comrade Dipankar said that on this day we pledge to work for annihilation of caste and to build a modern India. Comrade Dipankar said that on December 6 which is the death anniversary of Babasaheb Ambedkar, twenty-nine years ago, vandals of the Sangh brigade chose this day to mount one of the ugliest attacks on the syncretic culture and constitutional foundation of modern India. They demolished the Babri Masjid in broad daylight with the full complicity of the then BJP government of Uttar Pradesh and today ahead of the UP elections they are once again trying to vitiate the environment and divide the people by targeting Kashi and Mathura.

The battle lines between Ambedkar's vision of secular democratic egalitarian India and the Sangh-BJP conspiracy of turning India into a communal fascist state are becoming sharper with every passing day.

On the 65th anniversary of Ambedkar's demise and 29th anniversary of the demolition of Babri Masjid, secular democratic India renewed its resolve to defeat the fascist forces and strengthen the constitutional democratic framework and pluralistic cultural mosaic of modern India.