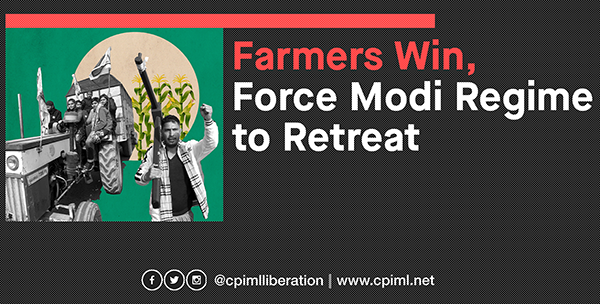 The manner of the repeal of the draconian and anti-farmer Farm Laws by the Modi regime has been as undemocratic and dishonest as the manner of their enactment. The laws were passed in Parliament by voice vote, ignoring demands for a discussion; likewise they were repealed without any discussion, in the high-handed style that is the trademark of the Modi regime.

The Modi regime’s explanation for the decision to repeal is creative. The Government continues to insist that the laws were without any demerits and that only a small minority of farmers refused to be persuaded by the government to support the laws. The government claims that despite the merits of the laws, it is repealing them for three reasons: because the Supreme Court stayed the laws; because farmers worked hard and produced plenty during the Covid-19 crisis; and because in the spirit of the 75th year of India’s independence – Azadi Ka Amrit Mahotsav (grand celebration of freedom’s nectar) – the government has magnanimously decided it must carry everyone along together.

All three reasons ring untrue. The Supreme Court stayed the laws in January 2021 – why did the Modi regime not withdraw the laws then and thus save farmers immense hardship and 700 lives? The Government which punished and vilified the farmers all year long is now pretending to pat them on the back and reward them for hard work! And finally – who does the government imagine it is fooling? It is obvious even to every child in India that Modi has withdrawn the laws, not as a grand gesture of benevolence marking 75 years of independence – but because he is desperate enough to accept a defeat at the hands of farmers in order to try and ward off imminent defeat in the Assembly elections in Uttar Pradesh and two other states. As always, Modi’s actions are motivated by his greed for power, not by any concern for farmers’ welfare.

We must also remember that while the government has repealed the harmful laws, which the farmers had rejected from the beginning, it is yet to accept the point that farmers have consistently demanded –a law to guarantee Minimum Support Price to provide 50 per cent profit over and above farmers' cost of production. Government purchase of crops at a Minimum Support Price from farmers will then be provided at price-controlled ration shops for India’s people.

While farmers are denied a minimum support price, consumers are paying the maximum market price! Soaring food prices right now are breaking the backs of the poor who have already suffered the repeated blows of demonetisation; lockdown; and unemployment at the hands of this regime. Food producers and food consumers alike are fighting the corporate stranglehold over food.

The country owes the farmers heartfelt thanks – not just for the food but for the seeds of renewed hope they have sown in the minds of people and the soil of our democracy. The farmers’ movement has revived the real spirit of India’s anti-colonial freedom struggle in a way that the “Azadi ka Amrit Mahotsav” cannot, organised as it is by the BJP regime that has ideological fealty to those who served the British Company Raj and betrayed the freedom struggle and is seeking to hand over farmers, food and everything precious in India to the Corporate Company Raj today.