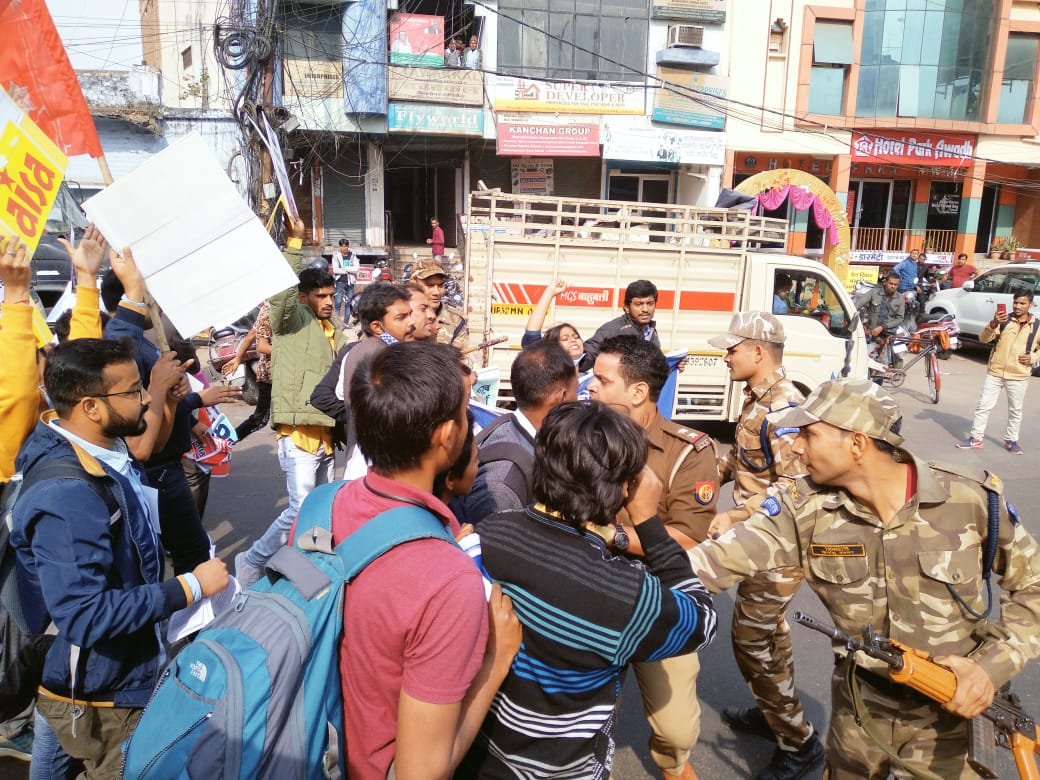 Despite arrests and lathi charge by the police, students and youth in Uttar Pradesh organized a Right to Employment march on the streets of Lucknow on 2 December 2021 under the 'UP Maange Rozgar' campaign. Led by the Uttar Pradesh Chhatra Yuva Rozgar Adhikar Morcha, the march was attended by leaders and activists of student-youth organizations including AISA, RYA, RLD Yuva Morcha, Yuva Halla Bol, Sangram Adhikar Party, AISF, Nyay Morcha, as well as movement against the teacher recruitment reservation scam.

It had already been announced that this march would be organized on 2 December under the banner of the UP Chhatra Yuva Adhikar Morcha with various demands including filling 25 lakh vacant government posts. Hundreds of youth arrived in Lucknow to participate in the march but scared of this march to the Assembly by students and youth, the Yogi government stopped youth at various places to prevent them from reaching Lucknow. Arrests of the students and youth began from 8 am at Lucknow Char Bagh station. Hundreds of people were arrested. Seeing this attitude of the government and administration, the youth changed their strategy and gathered at KKC College to start the march. As they proceeded to the Vidhan Sabha and reached Burlington Chowk, the police stopped the march and used force to prevent them from moving ahead. The students and youth were beaten with lathis and sticks and cameras of those who were taking pictures were snatched away. The students and youth continued to raise slogans for their demands.

After being released from police custody the students-youth held a meeting at Eco Garden. Addressing the meeting, Chhatra Yuva Rozgar Adhikar Morcha convener Sunil Maurya said that there is great anger among students and youth and if the 25 lakh posts are not filled before the election, the Yogi government will be thrown out of power. AISA National General Secretary Prasenjit Kumar said that the Yogi government will be taught a lesson that movements and struggles cannot be stopped by repression, arrests and lathis. RYA State President Rakesh Singh said that the Yogi government cannot stay in power by ignoring the employment issue. AISA Lucknow District President Prachi Maurya said that the increasing privatization of education and employment is one of the main problems and an important issue for students and youth. UP Maange Rozgar leader Chanda Yadav pointed out the Yogi government's insensitivity to women and said that women were harassed during the protest. AISA State President Shailesh Paswan said that this protest is not the struggle if one particular section but a struggle to save the country.

The 15 demands proposed at the meeting by the UP Maange Rozgar campaign are as follows:

1.  Fill all 25 lakh vacant posts and pay Rs 10000 unemployment allowance to all unemployed youth until they get employment.

2.  About 3.3 lakh posts for primary teachers are vacant; announce new teacher recruitments for 97000 posts without delay.

4.  Probe paper leak and other scams in TET and other competitive exams and punish the guilty.

5.  Immediate resolution of various issues including announcement of dates for UPSSSC-advertised JE 2016, 2018 exams.

6.  Government must answer what happened to its promise of 70 lakh jobs in 5 years; bring out white paper on employment.

7.  Waive loans of all self-employed persons.

8.  Re-open closed-down factories and plants in the District and provide employment to youth.

14.  Curb privatization and make right to employment a fundamental right.

15.  Revoke the decision to sell off national assets.