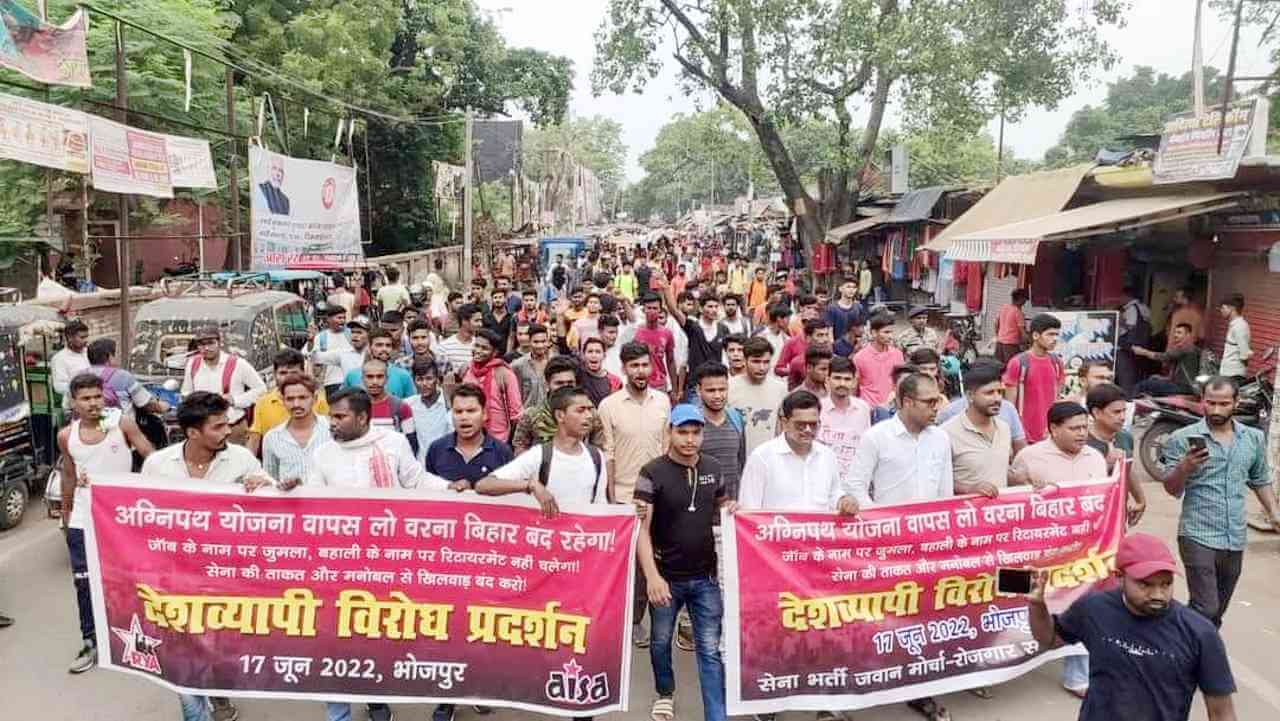 The country witnessed widespread protests by students and youth on 17 June onwards against the Modi government's Agnipath scheme for the army which is a cruel joke on the youth; moreover, it is wholly against national security and a scheme to play havoc with the entire structure of the army.

Under this scheme that initiates the contract system in the armed forces, young people will be retired at the age when they hope to start a long career. This scheme talks of employment for just 4 years. Youth across the country have risen in strong protest against this scheme. Retired army officers are also opposing this scheme.

This is a natural explosion of anger by unemployed youth against the Modi government which is giving 'jumlas' in the name of jobs and retirement at the age when careers should begin. CPIML General Secretary Dipankar Bhattacharya appealed to the youth to make the protests extensive so that the Modi government is forced to back down.

Comrade Dipankar pointed out that the Modi government had promised 'achhe din' and 2 crores jobs per year. Thus by 2024 young persons should have got 20 crore jobs. But now this government is talking of filling only 10 lakh vacancies before the 2024 election. The entire country is watching and understanding these 'jumlas' of the Modi government. Grounds for a decisive battle against this are ready.

Student-youth and their many organisations in all the states have opposed this Scheme demanding an immediate withdrawal and reinstatement of old army recruitment policy. Organizations in Bihar, including AISA, RYA, Sena Bharti Jawan Morcha and Rozgar Sangharsh Samyukta Morcha have taken up cudgels against the Modi government's Agnipath scheme to bring the contract system in the Army. These organizations have given the Modi government an ultimatum saying if the government toys with national security and plays this cruel joke on the youth of the country, protests will be further intensified.

This scheme also makes a mockery of national security. The country will never accept this destruction of the very structure of the Army. Retired Army officers have also come out openly against this scheme. Candidates who have passed 2 Air Force recruitment exams or are awaiting the final Army recruitment cut-offs will also be pushed into the ambit of this scheme. Strong protests have taken place across the country against this and every corner of the country is afire with anger.
This explosion of anger among students-youth is natural. The Modi government is cheating the youth in the name of Agnipath and has also betrayed the youth by endangering their future. The youth have determined to fight a decisive battle against the government's 'jumlebaji' and cheating. They have come out on the streets and have even gheraoing BJP leaders.

AISA-RYA have appealed to all Opposition parties, social organizations and common people to support this movement.

The Modi government's Agnipath scheme for recruitment to the Army has shocked and shaken the youth in Bihar and across the country. News of young people's suicides is coming in from some parts of the country. After 2 days of protests the government gave a mere assurance of extending the age limit just for the current year.

The Bihar Police resorted to brutal lathi charge in Patna during the Bihar Bandh on 18 June. Various student-youth organizations commenced a march from Patna University Gate led by AISA General Secretary and Paliganj MLA Sandeep Saurabh, RYA National General Secretary Neeraj Kumar, AISA Bihar President Vikas Yadav, AISA leader Kumar Divyam and other leaders. The police stopped the march at Kargil Chowk. The Bandh supporters wanted to move towards the Dak Bangla crossing but the police resorted to lathi charge to stop them and then arrested Sandeep Saurabh, Vikas Yadav, Kumar Divyam, Abhishek Chandan and Ashish Kumar, lifting them forcibly from the street and taking them to Gandhi Maidan Thana.

Sandeep Saurabh condemned this action by the police-administration shameful and said that they had come to put demands peacefully in front of the government. The entire country is witnessing the anger of students and youth against the Agnipath scheme that will push youth into unemployment and endanger national security. But instead of scrapping it the Modi government is trying to mislead the country by making small changes in the scheme. This will never be tolerated.

Shops and commercial establishments in Patna and most other towns in the state remained closed on 18 June, traffic was sparse and attendance in government offices was also less. The Bandh received extensive support from the people amidst imposition of Section 144, obstructing internet services in many districts and huge deployment of police forces. Reports of arrests have also come from Hilsa and Betia. The police in Nawada did not even allow Bandh supporters to come out on the streets, despite which the Bandh had an extensive effect.

The Bandh was effective in Ara which has emerged as the centre of this movement. Led by MLA Manoj Manzil, Raju Yadav, Sabir Kumar and Shiv Prakash Ranjan, students and youth organized a march culminating in a meeting near the Railway Station and pledged to carry on the fight till the Modi government scraps the Agnipath scheme.

The Bandh was also effective in Muzaffarpur where the Muzaffarpur-Darbhanga NH 57 was blocked for 3 hours at Bochahan. A massive rally was organized by AISA-RYA in the city. Protests, marches, road blocks and meetings were also held in Siwan led by MLA Amarjeet Jushwaha, Buxar,  Darbhanga, Madhepura, Arwal, Jehanabad, Bhagalpur, Purnea, Madhubani, Motihari, Kaimur, Beguserai and other Districts, making the Bandh effective.

CPIML Bihar State Secretary Kunal said on 18 June that the Bihar Bandh received widespread support from the people despite imposition of Section 144 to stop protests, shutting down internet in many parts of the state and heavy deployment of police force. Patna and many other cities remained closed spontaneously. There is news from many places of protesters being arrested. The arrest and repression of protesters who had come to peacefully put their demands in front of the government is condemnable.

He said that a long and organized struggle is needed against Agnipath (which will weaken national security and morale of the Army and is a cruel joke on the youth of the country) and other such schemes of the Modi government. He appealed to students and youth to carry forward and extend their struggle peacefully. Under pressure from the movement the government is proposing some amendments, whereas what is necessary is to withdraw it completely and start the process for regular recruitment to the Army. Extending the age limit for this year and giving 10% reservation in the Central Police Force is no solution because this scheme is not only a cruel joke on the country's youth, but will also weaken national security. The government has also reduced the numbers in the Army which will result in further unemployment. Chief Ministers of BJP ruled states are talking of employment opportunities for retired Agniveers in the state police, but aspirants to police jobs are already there. This amounts to a conspiracy to make the country's youth fight among themselves.

Protests on 20 June against Repression of Protesters During Bihar Bhandh

On 20 June student-youth organizations held Akrosh marches (March of Anger) across the state on the issue of student-youth leaders and withdrawal of cases.

The leaders said that the whole country has rejected the Agnipath scheme, and yet the Modi government clings to its adamant attitude. Instead of revoking this scheme, it is resorting to repression against protesters. If the Nitish government is really against this scheme it should pass a Cabinet resolution to revoke the scheme, as other states have done. According to reports received so far, hundreds of cases have been filed against protesters and there have been arrests from many places. The movement cannot be crushed through repression.

Student-youth community held March of Anger on 20 June against repression let loose by the Nitish Government. Protests were held throughout Bihar.

RYA Bihar State Vice President and CPIML state committee member Tariq Anwar was arrested from his house by the Gaya Police at about 10 pm on 19 June. He has not been kept at the local Thana but taken to an unknown location by the police. He was told to be taken into preventive custody in view of the protest call of 20 June and will be release later. But in the evening of 20 June he was sent to jail after falsely implicating him in a case related to the railway recruitment agitation that had happened last year!

CPIML Bihar State Secretary Kunal strongly condemned the arrest of RYA State Vice President Tariq Anwar and said that the Bihar government is resorting to forceful repression against protesters. False cases are being slapped and innocent persons are being arrested from various places. CPIML demanded from the government that all the arrested students and youth should be released.

He said that the Modi government is adamant and continues to disrespect public sentiment, so much so that it is trying to defame the movement. He also demanded that from the Bihar government to pass a resolution against Agnipath scheme in the coming Assembly session. CPIML MLAs along with all the Mahagathbandhan parties will march from the Vidhan Sabha to Raj Bhawan in Patna on 22 June 2022. Comrade Kunal called on students and youth to take a leaf from the farmers' notebook and fight hard, strong and united to make the Modi government back down and scrap the Agnipath scheme. He thanked the people of Bihar for the effective Bandh on 18 June and called on the youth to take the movement forward to victory in a peaceful and organized manner.

CPIML General Secretary Dipankar Bhattacharya has appealed to the country's students and youth to carry forward and intensify their protest movement against the Agnipath scheme. BJP-Sanghi people are trying to spread anarchy in the name of the movement. This is their familiar method of defaming protest and justifying and legalizing repression. Students-youth should ensure failure of this method.

CPIML UP State Secretary Sudhakar Yadav said that BJP State governments' promise that the 75 out of 100 who are removed from the Army as unfit after 4 years will be given priority in state government jobs is nothing short of cheating. If state governments were so willing to give jobs, unemployment would not be spiralling and youth would not be committing suicide. As it is, we have already seen the fate of Modi's promise of 2 crore jobs per year and 14 lakh jobs per year just in Uttar Pradesh. Comrade Sudhakar said that 4 years later youth who are removed from the Army will once again be out on the streets. Their entire life will be in front of them, one long stretch of unemployment. 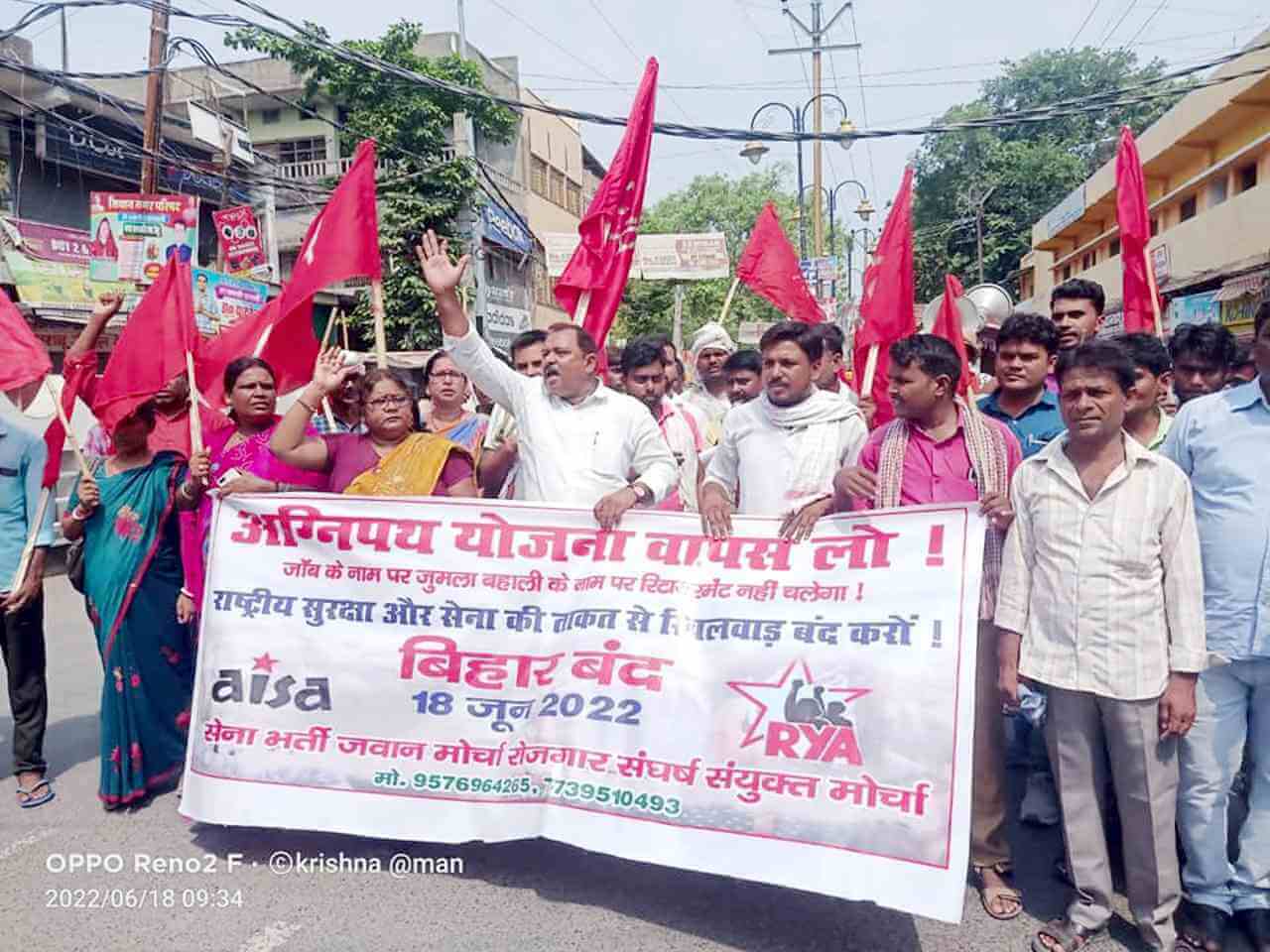