Mahagathbandhan Objective is to Save Country and Constitution 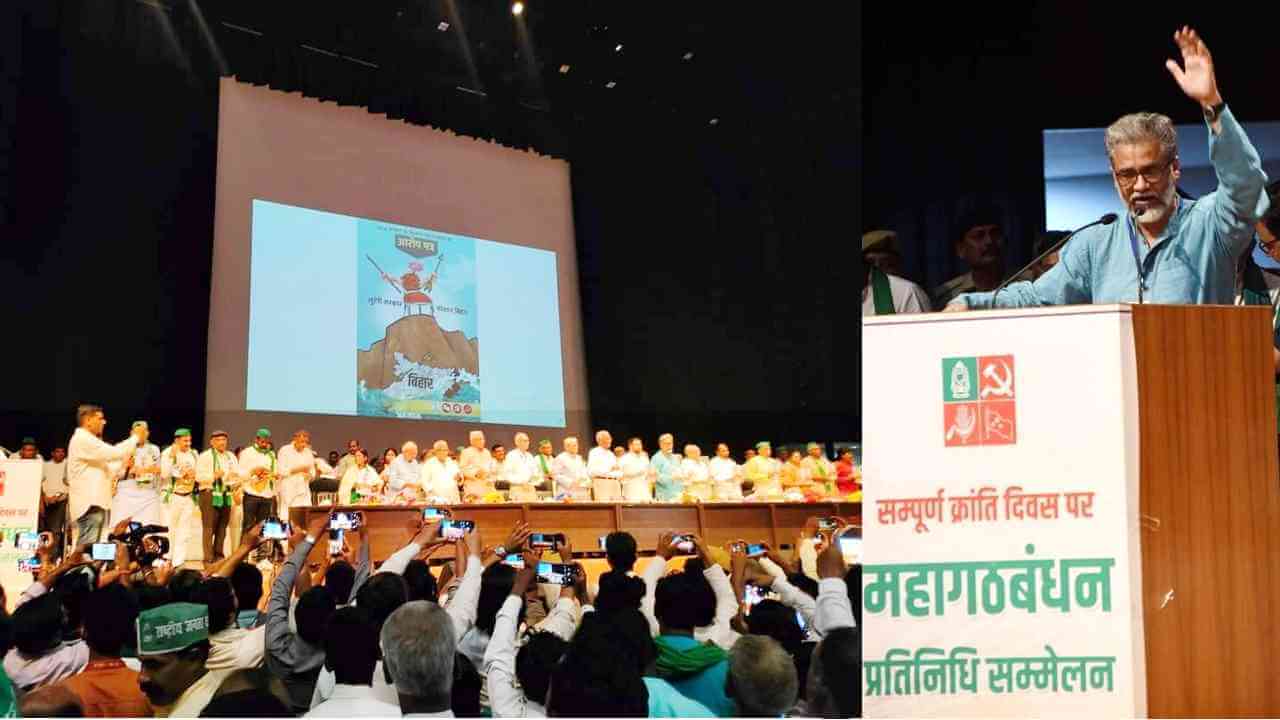 Jai Bhim and Lal Salam to Tejashwi Ji, all our Mahagathbandhan leaders, and all the committed friends and comrades who have come here from all corners of the state! Today is a historic occasion. The '74 movement, the declaration of Sampurna Kranti (total revolution) began on this date. 48 years have passed. So we will talk a little about history. We shall also act, but I will speak a little about the history of its background. We don't have to go too far back, but just 7 years back to 1967 when the whole country witnessed a big political change. 1967 is a milestone in the struggle for social change, when two significant events took place. First, many states had gone through elections and for the first time not one but nine states evinced the winds of change and non-Congress governments were formed. In those days Congress governments were the norm. Congress had a bigger hold perhaps than even the hold BJP has today. Thus the country witnessed a big change in Parliamentary Opposition and the parliamentary stream.

1967 was also the year of the great Naxalbari peasant upsurge, which ignited the dream of a radical transformation of Indian society, so the oppressed poor could turn into the leading force of India's political system and workers, peasants and toiling masses could secure their rights and recognition. In Bihar the spark of Naxalbari fell first in Musahari in Muzaffarpur and then in Ekbari in Bhojpur to secure respect and rights for the poor. It was in this changed situation of growing social awakening and upheaval that 1974 happened.

The communist-led struggles of the rural poor and the 1974 upsurge of students and youths grew separately. The government of the day tried to crush both - 1974 movement leaders and activists were jailed and leaders of the rural poor upsurge were killed in large numbers. In 1975 the second General Secretary of CPIML Comrade Subrata Dutt (Jauhar) went down fighting in Bhojpur. But the repression did not work, the Emergency had to be lifted and elections held, and that ushered in the first non-Congress government at the Centre and in Bihar too where Karpoori Thakur became the Chief Minister.

Today the situation is different. We are witnessing two streams of the JP movement. One stream has flowed from JP into the BJP. The people from that stream are not inside this auditorium; they are outside and are pushing the country towards destruction. The other stream is that with which a different kind of alliance has been formed to fight against the BJP. This Mahagathbandhan currently comprises 4 parties. It is possible other parties will want to join. Of the 3 Communist parties the relationship with CPIML is new. During the 15 years of RJD rule we were in the Opposition. Ours has been a bitter-sweet relationship. We have been together for the past 1.5 years because today it is the need of the hour. The Emergency of '75 is over, but today the country is in the grips of an undeclared Emergency. This undeclared Emergency is not transitory but of a permanent nature. Today's Emergency is in the name of 'Achhe Din'. In those days some people were put in jail, but today there are new and varied weapons of repression. This country has never before seen such repression, with the Constitution itself being trampled underfoot. The biggest question today is, will India survive or not? In 1992 when the Babri Masjid was being demolished, some people were calling it just communalism and saying that we will handle it through fraternity and harmony. We, on the other hand, said even at that time that this is not mere communalism but communal fascism which is determined to change the definition and identity of the country. Starting with the Babri Masjid, other monuments including Taj Mahal and Qutub Minar are threatened today. India's pride and international identity the Taj is being questioned today. Children are being taught that these are all symbols of slavery. The beauty of our country's history, a matter of pride for us, is being called 'foreign' today. Poison is being served out in the name of 'Azadi ka Amrit Mahotsav'. This is the biggest issue in front of us today.

Therefore, a massive struggle is the need of the hour today such as never before. Dr Ambedkar, when he wrote the Constitution, had the perspicacity to observe that the soil in this country is not a democratic soil. We are making the Constitution, but the real need is to create a democratic soil in the country. He also said that there can be no greater disaster than making India a Hindu Rashtra. Today we are facing that very real danger, and a huge fight is required against this huge danger. We can say that this is a second freedom struggle and will require the same level of sacrifice.

Today we are submitting a charge sheet against the central and state governments. We have the farmers' issues. A long battle took place in the capital against the 3 black farm laws, and people called it the 'Dilli wali ladai' (the Delhi fight). Now we have in front of us the challenge of making it a 'Patna wali ladai', of organising a massive farmers' movement for guarantee of MSP from Champaran to the villages of South Bihar. During the Assembly election Nitish Kumar countered our promise of 10 lakh jobs with a promise of 19 lakh jobs. But today even existing posts are being ended. The Prime Minister claims he has a 56" chest, but eligibility for appointment as a Home Guard requires a 62" chest. What kind of cruel joke is this? We have seen student-youth anger against privatisation of the Railways and betrayal. Truly, the call for employment is not a mere slogan but today's most pressing need. While we are submitting a charge sheet against the government, we are at the same time submitting a Pledge of our own, to implement which we must win the trust of the people and energize them. For this the present momentum of the Mahagathbandhan is not enough, we need to increase the speed and momentum. It is not enough for this alliance to function only during election time; this needs to become an alliance for the daily struggles of people. This has to become an alliance of students, youth, minorities, scheme workers, farmers, workers, and the entire toiling masses. After winning UP the BJP people now want to convert Bihar into UP. They are trying to bring Bulldozer Raj in Bihar also. Earlier, people used to be afraid of bulldozers but if Modi has his way he would even make it his election symbol. We need an alliance of extensive unity, courage and hope to fight against this. Such an alliance is the call of Sampurna Kranti and the legacy of Naxalbari.

Today anyone who voices dissent is tortured as an 'Urban Naxal'. Every dissent is labelled as 'Naxal'. Therefore it has to be admitted that there was something special in the Naxalbari movement. That was not a movement merely to overthrow a government but an attempt at complete grassroot level change. Our precious legacy of Bhagat Singh, Ambedkar, farmers' movement, Naxalbari, the '74 movement is not merely for a few electoral seats. Today we are in Super Emergency. Accordingly, we have to accelerate the speed of our movements. A mass movement is required against inflation, unemployment and the snatching away of ration cards. We could start this from 7 August.

Today we embark on a journey with fresh hope. That is how we must view this massive convention. This Mahagathbandhan alliance was formed during the 2020 election. Before that there was a different alliance. Alliances change, and will keep changing, but we need to create energy for the massive struggle that faces us. Some people say that there is still some energy left in Nitish Kumar, and he could come here once more. We don't know how much energy he has left; whether or not he will come again is not the issue. The issue is about movements, about people. On the strength of our own energy we must oust this fascist government in 2024. This cannot be done only through votes. It requires extensive campaigning from village to village and extensive movements to be organized. We have to try with full honesty so that people start looking at Hindustan, India, once more through the lens of truth. We must all walk in unison in this big fight. CPIML is the youngest and newest party in this alliance and we are ready to fight this fight with all our energy. 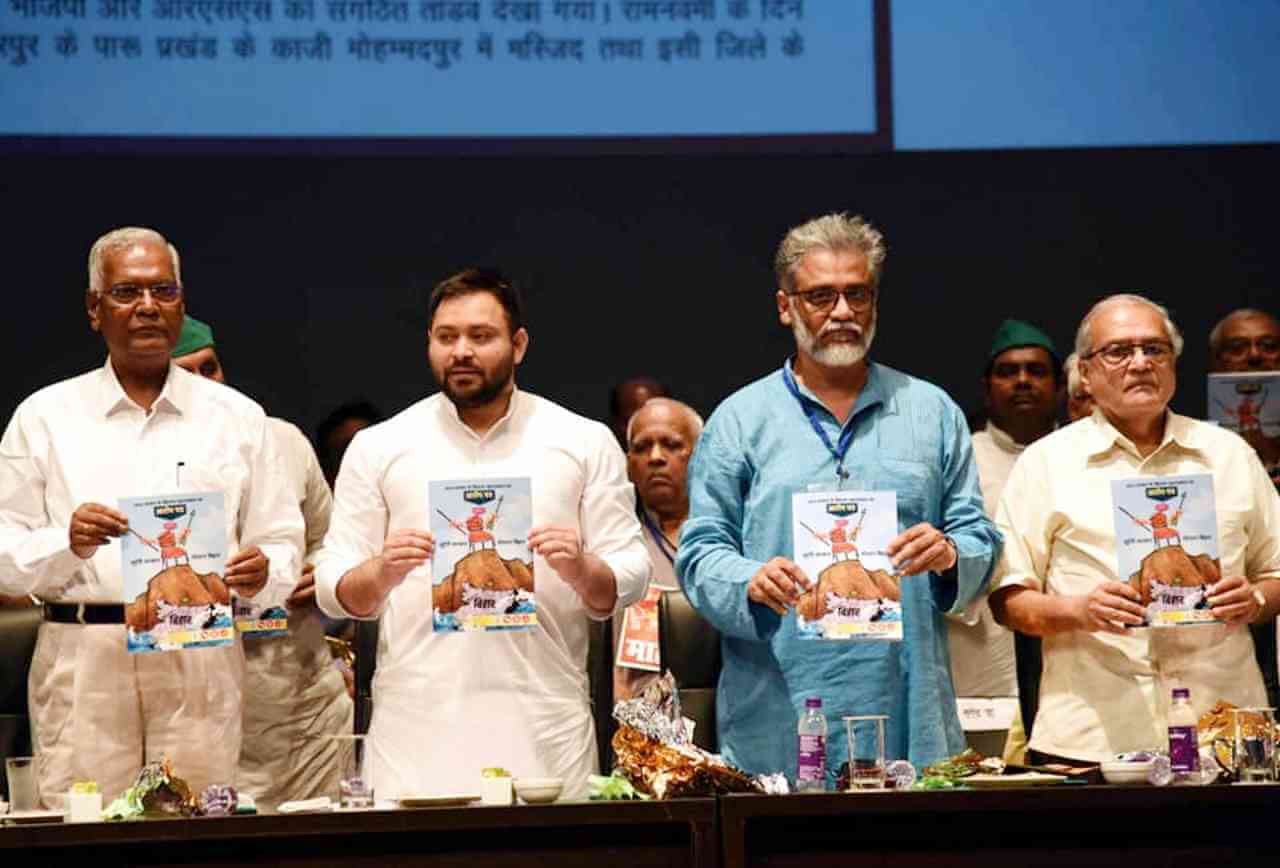