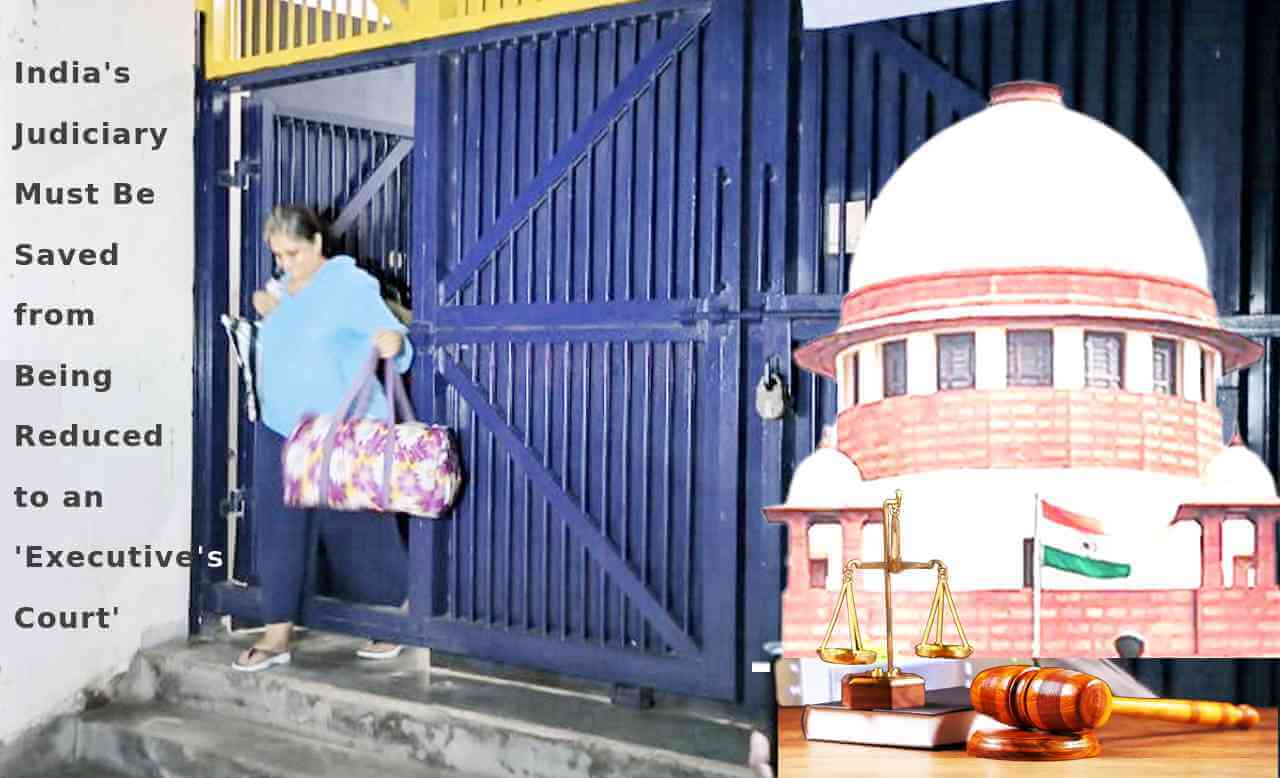 On 3rd September Teesta Setalvad walked out from Ahmedabad’s Sabarmati Jail after spending 68 days in prison. Arrested along with R.B. Shreekumar, in what could only be termed as their politically vindictive arrests for pursuing justice for victims of Gujarat 2002 carnage, she was released from the jail on the orders of the Supreme Court entitling her to interim bail, while her main bail application is heard by the Gujarat High Court.

Earlier, in June this year, the Supreme Court, while dismissing charges of criminal conspiracy against Prime Minister Narendra Modi and others in relation to the 2002 Gujarat carnage in the case filed by Zakia Jafri and  Teesta Setalvad, literally paved the way for Teesta’s vindictive prosecution for her relentless pursuit of justice by deeming the conspiracy case against Modi & Co. to be malicious prosecution and observing that all persons “involved in such abuse of process, need to be in the dock and proceeded with in accordance with law.”

Within a day of this Supreme Court judgment, a criminal case was registered against Teesta, RB Sreekumar and Sanjiv Bhatt accusing them of criminal conspiracy, forgery and giving or fabricating false evidence among other offences, and the Gujarat Anti-Terrorism Squad immediately picked up Teesta from her Mumbai home, whisked her off to Ahmedabad and produced her before a Magistrate who initially placed her under police custody and then remanded her to judicial custody. Teesta’s application for bail was rejected by the Session’s Court on July 30, following which she approached the Gujarat High Court. When her matter came up before the Gujarat High Court on 3rd August, notice was issued and the hearing was set for September 19. This is when Teesta moved the Supreme Court, which granted her interim bail on 2nd September.

It is welcome that Teesta has got some freedom and justice with her interim bail. This is an important relief for Teesta and victory for every fighter for justice and democracy in the battle against the Modi-Shah reign of hate and lies, vendetta and intimidation. But we must remember that this relief marks only an exception even as the ever-increasing tribe of political prisoners in India. BK-15, anti-CAA activists, Dalit intellectuals, Adivasi activists, Muslim activists, journalists, all targets of the BJP/RSS’s politics of vendetta languish in jail for years. This indefinite detention of dissenting voices is becoming a defining feature of the Indian brand of fascism. The fight for their freedom is an essential part of the battle for democracy and justice.

Meanwhile, on 30th August, a bench of the Supreme Court closed contempt proceedings arising out of the demolition of Babri Masjid in 1992, against former Union Ministers Murli Manohar Joshi, Uma Bharti, Sadhvi Ritambhara, and officials of the Uttar Pradesh administration and some Sangh Parivar leaders, asking why “flog a dead horse” and at the same time admitting that it was “unfortunate” that the case was not taken up earlier. The Court held that “nothing survives in the matter now” since a larger bench of the Supreme Court has already delivered a judgment on the Ayodhya matter.

This forcible closure flies in the face of the fundamental principles of justice and previous Supreme Court judgements in the Ayodhya case. Firstly, the Supreme Court ought to have remembered that in the Ayodhya judgment It had held that the Babri Masjid’s demolition constituted an egregious breach of the rule of law. Secondly, contempt petitions were filed even before the actual demolition of Babri Masjid and solemn assurances were made during its pendency that the structures would not be in any danger. Yet Babri Masjid was demolished on 6th December 1992, during the pendency of these contempt petitions. Indeed the Supreme Court in its judgment dated 24.10.1994 held the then Chief Minister of Uttar Pradesh, Kalyan Singh, guilty of contempt for having disobeyed the orders of the Court. In this judgment the Supreme Court stated that proceedings for suo motu contempt against the then Chief Minister of the State of Uttar Pradesh and its officers in relation to the happening of the 6th December, 1992 had been initiated and those shall be dealt with independently. This contempt petition which was to be “dealt with independently” was thereafter not listed even once until 2000, when it was adjourned. And now it stands closed.

On the same day, another bench of the Supreme Court  closed all proceedings arising out of the 2002 Gujarat carnage commenting that it had become “infructuous” with the passage of time. The pending cases included transfer petitions filed by the National Human Rights Commission, special leave petitions of riot victims and the writ petition filed by NGO Citizens for Justice and Peace in 2003-04, seeking transfer of investigation from the Gujarat police to the CBI. Incidentally, the Supreme Court, has been harshly critical of the Gujarat government, going to extent of calling those in charge "modern day Neros", who were looking elsewhere when innocent children and helpless women were burnt to death and "were probably deliberating how the perpetrators of the crime can be saved or protected". That the Supreme Court chose to close both these matters marks an abject abdication of its responsibilities.

Years ago, in 2004, Prof. K. Balagopal had cautioned that the “forces of the right” have “contrived to capture power”, and that they have captured the Courts too in substantial measure. Much water has flowed since then and we are witness to a direct attack on the independence of the judiciary particularly in appointments and the consequent transformation of the judiciary into what legal scholar Gautam Bhatia calls the “executive’s Court” i.e. not merely subordinating to the decisions of the executive, but becoming an institution where “executive ideology can be laundered, and shown to the world as sparkling, judicially-declared truth”. For democracy to survive, this trend needs to be reversed and the functioning and decisions of the judiciary must be subjected to continuous critique in defence of democracy.