YOUNG INDIA Against CAA-NRC-NPR movement which started with over 100 student-youth organisations along with various student unions coming together to launch a united battle to save constitution and citizenship has moved into the next step. Young India which was campaigning from past one month for Delhi Challo programme resisted and showed its strength and unity in Delhi.

The culmination of month long campaign which crisscrossed Bombay, Bangalore, Hyderabad, Karur, Coimbatore, Cuddapah, Patna, Begusarai, Darbanga, Khatiar, Allahabad, Lucknow, areas across Punjab was to take place in a march from Ramlila Maidan to Parliament Street on 3 March. The whole process of the march started with the formation of Young India committees at various places at college level, city level and state level. An extensive Preamble Reading was taken up as an assertion of the constitutional values that these laws challenged. It was reiterated that the students were standing in defence of democracy and constitution and there was anybody who was protesting, it was the Modi-shah duo with their sectarian ambitions.

Young India reached out various Shaheen Bhag inspired protests around the country and initiated to forge linkages with them. It reached out to these committees to join the Young India movement. Several rounds of meetings and campaigns took place in Delhi, UP, Bihar and other states to forge a larger unity between women who are protesting and students who are organising the protests. The success of this was seen when the women not only became a part of the solidarities but also took up the role of leadership, shaping and reshaping the movement. Unable to find a political answer BJP-RSS through its stooges like Kapil Mishra instigated communal riots which were organised in targeting Muslims and anti-CAA protestors. The Delhi Police who had to ensure law and justice sided with the mob and communal riots instigators and allowed the targeted pogrom on a full-fledged scale.

Young India stood up to this challenge and took lead in relief, rescue and ensuring peace when the Delhi Government and the central government failed in their constitutional, moral and legal duties. Young India formed peace committees, held peace marches and tried to bring communal harmony into the society. It is in this context that the 3rd March rally was reframed as a march for peace, unity and communal harmony.

Delhi police in a shameful manner first denied permission for the Peace March called by the Young India Against CAA-NRC-NPR at last minute and on the day of the march illegally detained protesters who peacefully assembled at Ramlila grounds. It is the same Delhi Police who has till date not filed any FIR against Kapil Mishra, whose hate speech has instigated an organised pogrom on Muslims in Delhi. The same Delhi police had allowed the same riot instigator Kapil Mishra to hold a 'peace march' from Jantar Mantar to CP with slogans filled with hate.

However, Young India a Coordination Committee of over 100 Student-Youth organisation’s Peace march was not only disallowed but buses were hijacked, diverted, bus drivers intimidated and illegally arrested and protesters attacked and detained by Delhi Police in various instances.

Despite these logjams and detentions by Police, Young India asserted its unity by a massive show at Jantar demanding the arrest of Kapil Mishra, resignation of Amit Shah, justice for people who were killed and demanding government to ensure peace, and rejection of triple threats of CAA-NRC-NPR!

Young India Against CAA-NRC-NPR will continue its movement against communal hate and to save citizenship and constitution. 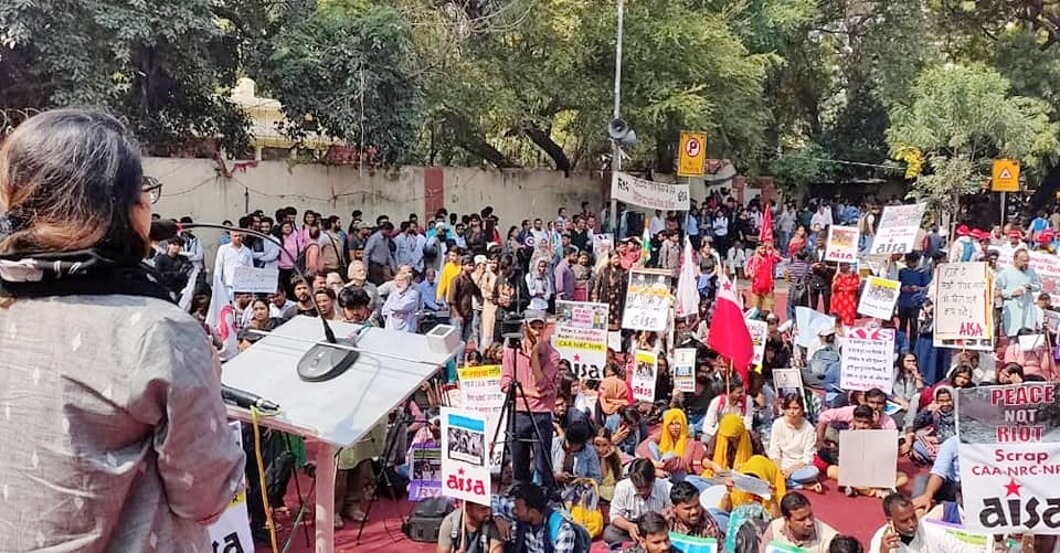