AILAJ Statement Of Opposition To The Shocking Order Of The Supreme Court ... 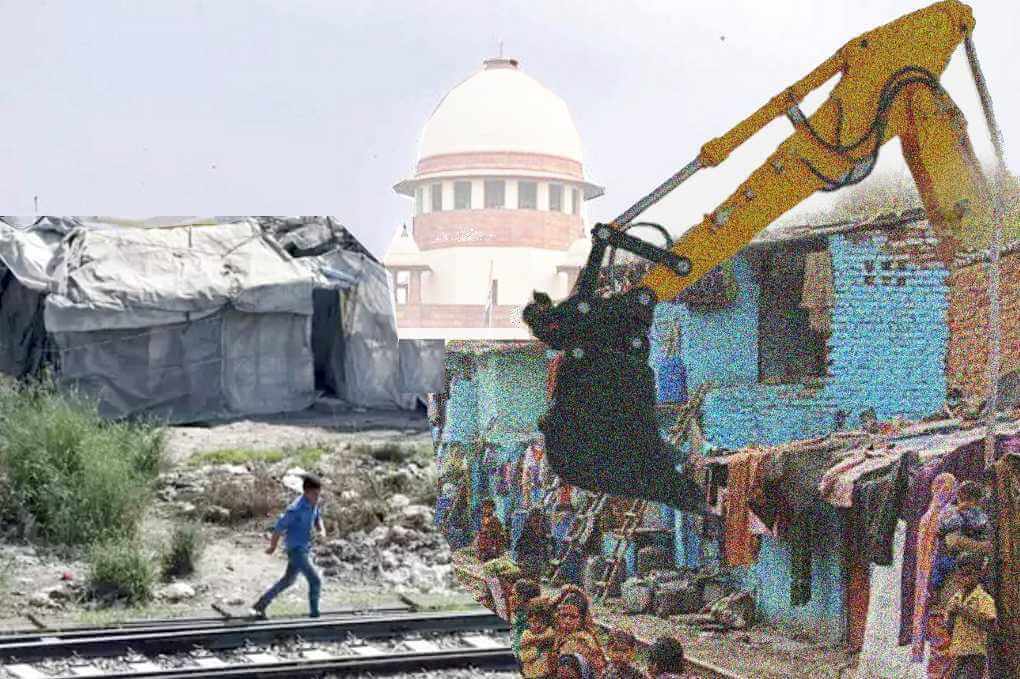 AILAJ Statement Of Opposition To The Shocking Order
Of The Supreme Court To Demolish 48,000 Jhuggi Jhopdis (Hutments) Built Along Railway Tracks In Delhi

On 31st August, 2020, the 3 judge Supreme Court Bench headed by Justice Arun Mishra has ordered in Writ Petition(s)(Civil) No(s). 13029/1985, the demolition of nearly 48,000 slum dwellings along railway tracks in Delhi within three months and has further directed no court should grant any stay on removal of slums and that the previous stays on the demolitions will cease to be effective. It is disturbing that this order has been passed in the course of hearing of  the omnibus M.C Mehta Public Interest Litigation on pollution in the National Capital Region and that the order was passed on the basis on the Ministry of Railways claiming that it is unable to clean waste due to the slums. That somehow in order to clean the area around the Railway, entire slum colonies have to be destroyed; which house the poorest working class members of the city.

Among several disturbing aspects of the order, the most glaring is the denial of the most elementary principle of Natural justice of the slum dwellers; their right to Notice and to be heard, in a matter which will leave them homeless and on the streets! This right is embedded in Article 21 of the Constitution, further, in the Olga tellis, a 5 judge bench of the Supreme Court recognised and enforced this right along with the fundamental right to shelter ,which ought to have been followed in this case as it was a binding precedent; raising a very serious additional issue of judicial discipline.

In various judgments the Supreme Court has held that the Right to Shelter is protected by the right to residence under Article 19(1)(e) and the right to life guaranteed under Article 21, but the order passed by the bench of Justice Mishra has completely ignored these precedents.

Further it is a grave violation of the principles of natural justice that the Supreme Court has barred any other court in the country to even pass an interim order in the matter. This order is a massive blow to the established jurisprudence on right to housing and has completely ignored the established procedure in cases of slum evictions, as laid down in Sudhama Singh's Case by the Delhi High Court in 2010, which held it was the duty of the state (prior to eviction) to:

(i) conduct a survey of all persons facing evictions to check their eligibility under existing schemes for rehabilitation, and

(ii) to carry out a rehabilitation exercise ‘in consultation with each one of them in a meaningful manner.’

This was later confirmed by the Supreme Court in (SLP (Civil) No. 445-446/2012), confirming this procedure as the established precedent. The law laid down in Sudhama Singh was again confirmed by the Delhi High Court in Ajay Maken's Case, wherein the Ministry of Railways had forcibly demolished Shakur Basti, built on Railway land in Delhi, rendering 5000 people homeless.. The Delhi High Court held that this was a violation of the entitlements recognised in Sudama Singh, which formed the relevant law for all evictions/demolitions/removals in the state of Delhi, including eviction of settlements on Railway land. In coming to this conclusion, the courts have based their reasoning on the Delhi urban shelter improvement board act, 2010, the Delhi slum rehabilitation Policy, 2015 and the various positive obligations of the state to provide housing under the Constitution.

In comparison, this order refuses to engage with these developments in law, and orders the slums be demolition in a cryptic and casual manner, citing some 'Political interventions' and that a special task force for removal of encroachments from the Railway Property has already been constituted by an order of the NGT, Delhi.

While passing this order while hearing a case on pollution the Bench seems to be implying that the poor and working class who live near railway tracks are responsible for the pollution of the city! When previously, in Municipal Council, Ratlam case , one of the issues before the Supreme Court was whether the presence of slums in the area in question is to be seen as the cause of the public nuisance ? the supreme court while answering in the negative pinned the responsibility on the municipal authorities for not providing basic amenities to the slum dwellers which was understood to be the cause of waste. In this case, this understanding is inverted and the slum dwellers are understood as 'encroachers' and pollution creators as opposed to rights bearing citizens. This again strengthens the poisonous discourse of slum dwellers being inherently 'dirty'

Finally, it is worth reiterating the appalling consequences of this order; that if this order is implemented lakhs of slum residents will be rendered homeless in the middle of a pandemic, making them even more vulnerable to be infected by Covid-19; this would be nothing short of a colossal disaster inflicted by the Supreme Court.

Therefore, All India Lawyers’ Association for Justice (AILAJ) demands that the Supreme Court suo motu withdraws its directions and recognises the right to life, shelter and livelihood of the poor working class living in these slums and pass orders towards the realisation of these rights. The Ministry of Railways, on its part, must immediately apply for review of the said Order and protect the rights of the working class.