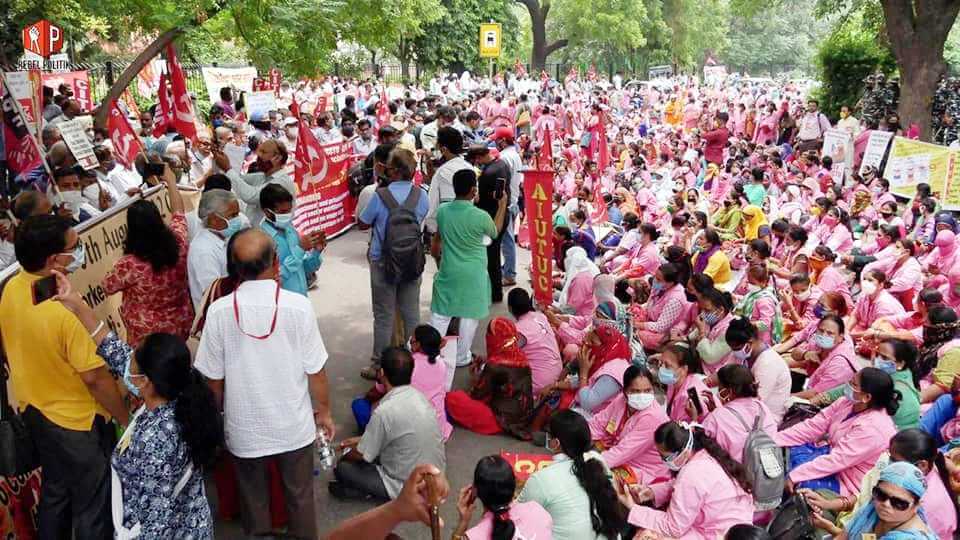 All India Scheme Workers Federation expresses revolutionary salutations to all the ASHA workers, Rasoiyas and Anganwadi Sevikas-Sahayikas for the success of the 2-day historic strike despite the troubles and complexities of Corona times.

This strike, organized on 7 and 8 August 2020 was attended directly or indirectly by lakhs of scheme workers. The ASHA strike in Bihar began a day earlier on 6 August, while the strike became extensive in most other States in the country. There is great anger among scheme workers due to negligence by State governments and betrayal by the Central government, resulting in the resounding success of the strike. The solidarity extended to the just demands of the strike by society and other organizations, especially frontline workers like sanitation and contractual health workers, has given a great strength. The message has gone to society that scheme workers are not receiving even a monthly honorarium based on minimum wages. The strike has impacted the government and proposals for talks are coming in from various places. Talks have been held in Bihar with the Executive Director, Health Department.

ASHA workers’ union leader Shashi Yadav has said that we now need to carry forward the solidarity built through the success of the strike and ensure our participation in a big way in the Satyagraha/Jail Bharo Abhiyan called by joint trade unions on 9 August. 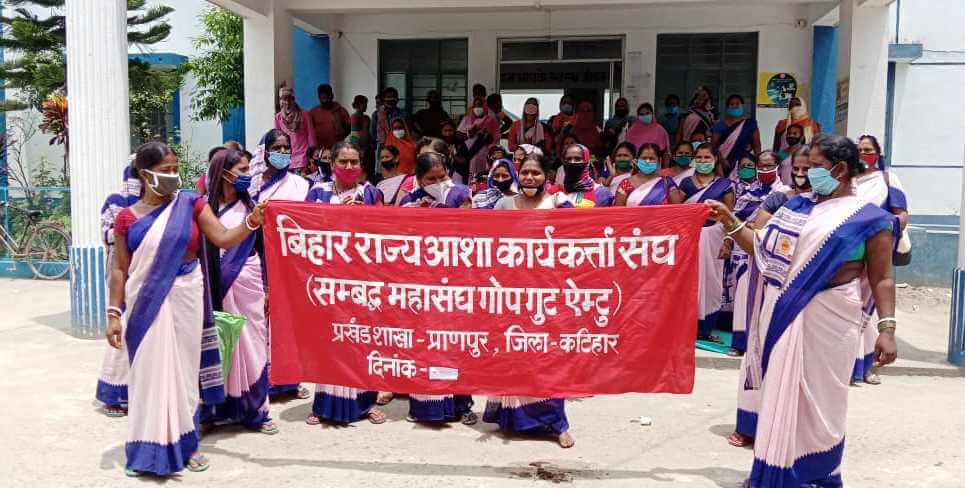 ASHA Health Workers Union State General Secretary congratulated ASHA workers for their successful strike and said that this is a historic occasion where all unions have come together on a common platform in a struggle against anti-scheme worker policies. Pragatisheel Mahila Ekta Kendra General Secretary Rajni said that the Modi government is bending over backwards to serve the corporate class and is determined to snatch away hard won rights of workers. On the concluding day a protest was also held by the representatives from many trade unions and organizations at the Buddha Park in Haldwani. Earlier, ASHA workers in Uttarakhand began the 3-day strike on the main issues of minimum wages, regularization, Lockdown allowance, pension, insurance protection and dignity. The Uttarakhand ASHA Health Workers Union affiliated to AICCTU participated actively in the strike while maintaining physical distancing and other Corona prevention guidelines. Dharna protests were held at all the districts in the state. Raising slogans for full wages, dignity and rights, ASHA workers alleged that the Central as well as State governments are using ASHAs like bonded labor.

A statement issued on the occasion by the Union said, “ASHA workers were appointed for reducing the infant mortality rate, but after that they have been consistently and increasingly burdened with various tasks like survey work and other work. The problem is that ASHAs are made to work but are not paid for the work they do. On other words, the government is treating ASHAs like unpaid workers. If their work load is increased, the payment should also be commensurate. What is wrong if ASHAs raise this demand”?

“Instead of paying them petty wages for various tasks, ASHAs should be paid a fixed monthly salary. Far from sympathetically considering their issues, the government does not even deem it necessary to reply to their memorandums. This insensitive attitude of the government towards ASHAs, who are rendering invaluable service by doing non-stop emergency duty, is extremely unfortunate”.

On the first day of the strike the ASHA workers sent a memorandum to the Chief Minister of Uttarakhand with the following demands: