Illegal Mining and Transport of Granite in Visakhapatnam 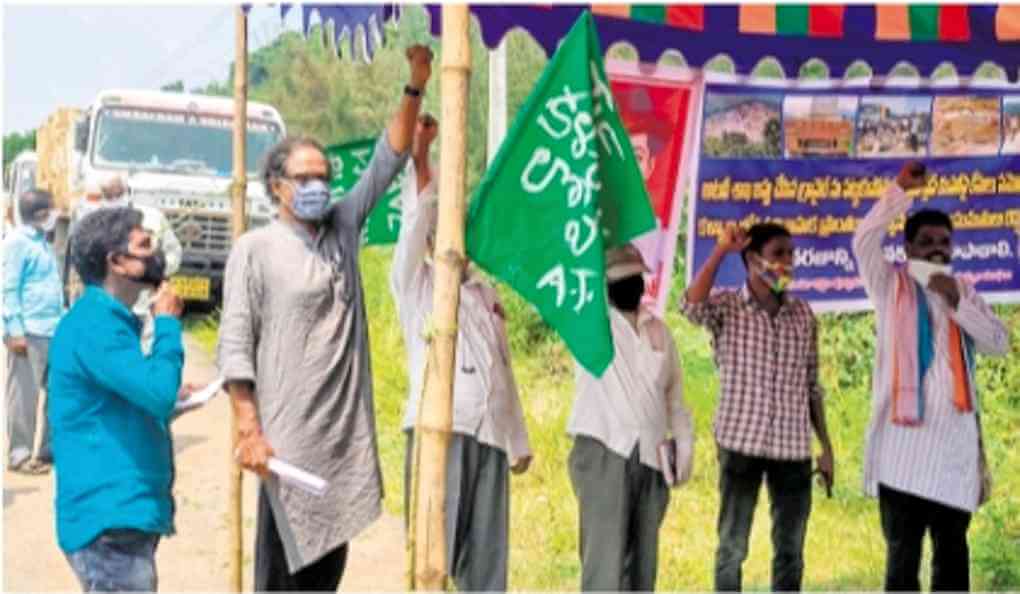 The All India Agricultural and Rural Labour Association (AIARLA) demands that steps be taken to immediately stop the illegal transport of granite slabs from the Cheemalapadu forest block near the Kalyanapulova reservoir in Ravikamatham mandal of Visakhapatnam district. AIARLA has urged the District Collector to conduct an enquiry into this illegality.

These granite blocks, numbering 197 and belonging to the Stone Plus company were seized by the Forest Department on May 1, 2020 from Compartment No 800 in the Cheemalapadu forest block. These granite blocks as well as other machinery are being transported out of the area without any requisite permission. Local adivasis have been holding dharnas in front of these vehicles since past few days but there has so far been no intervention by higher officials concerned.

The Divisional Forest Officer (DFO), has in a report (RC. No. 7809/2018/TO (I) dated 8-6-2020 submitted to the Chief Conservator of Forests (CCF), detailed comprehensively the illegal mining of granite being carried out by Stone Plus. However, the CCF has not taken any action whatsoever against the Stone Plus company. Neither has the CCF submitted any report to the government seeking cancellation of the mining permission accorded to Stone Plus. One of the reasons for not doing so is the fact that it was this very officer who is CCF now who had earlier in his capacity as Visakhapatnam DFO accorded a No Objection Certificate (NOC) to the Stone Plus.

The Visakhapatnam DFO had conveyed to the AD, Mines department on 28-2-2020 that the mining being carried out by Stone Plus granite company in the Somalamma Konda was located in the Reserve Forest and therefore not to accord any manner of permits without consulting the Forest Department. What is seriously objectionable is that despite this, the mines department went ahead and gave permission to the company. AIARLA has demanded cancellation of these permits which are being used to cart away during the night the granite slabs that were seized by the Forest Department on May 1 this year. The vigilance wing of the mining department has not yet carried out any enquiry into this.

The Visakhapatnam DFO had submitted a report to the Director, Mines and the District Collector on 16-3-2020 stating that the lease accorded to Stone Plus in the Somalamma Konda must be cancelled forthwith because it is located in the Reserve Forest. Yet no action was taken by these officials pursuant to the DFO’s submission, on the contrary, local police managed to get three lorry loads of granite transported out of the area after threatening local adivasis on September 25. The Sub Inspector of police personally got the lorries to transport the granite from the reserve forest area to the Kothakota road. Since May this year, forest officials were standing guard to the forest slabs and machinery that were in the custody of the Forest Department. However, since 25 September afternoon they have disappeared from the area. Stone Plus company is carting away the granite without even the requisite seizure release documents.

PS Ajay Kumar, National Secretary of AIARLA has demanded that a case be lodged immediately under the Forest Act against those doing this illegal activity.