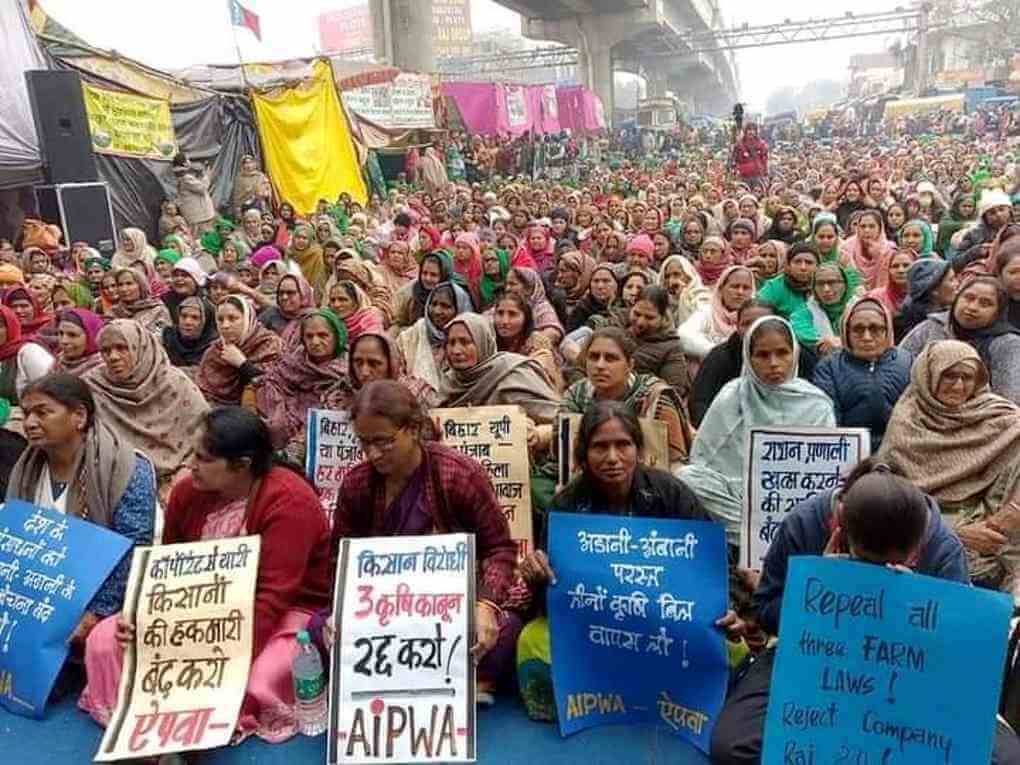 18 January 2021 was observed as Mahila Kisan Diwas (Women Farmers Day) in response to the call given by the Samyukta Kisan Morcha. Thousands of women protested at the Delhi borders against the Modi government and burnt effigies of IMF and WTO. Women from Punjab, Haryana, Bihar, Karnataka, Maharashtra, Rajasthan, Delhi, Uttar Pradesh and Uttarakhand participated in the protests. All over the country also, Women Farmers’ Day was observed by AIPWA and other women’s movement groups.

Addressing the gathering, Comrade Meena Tiwari said that when Canadian Prime Minister Justin Trudeau gave well-meant advice to the Modi government to consider the farmers' demands the Modi government rubbished the it as interference in internal policy matters but when IMF spokesman openly supported these draconian anti-farm laws as very useful, the Modi government was delighted. Today by burning the IMF-WTO effigy we the women farmers of India send out a message to IMF, WTO, World Bank and other such puppet organizations of multinational corporates that if they do not stop interfering in India's internal and policy matters we can take the decision to gherao the offices of these organizations just as we have gheraoed the offices of Ambani-Adani.

At the Ghazipur border, AIPWA’s UP President Krishna Adhikari addressed the women farmers’ gathering, and warned against the communal politics of the Yogi and Modi Governments that sought to divide farmers and people on Hindu-Muslim lines so that the companies like Adani and Ambani can rule.

At the Singhu border, AIPWA National Secretary Kavita Krishnan and AISA activist Navkiran Natt addressed the gathering. Women workers from unorganised colonies and slums of Delhi held a march under the AIPWA banner in support of the farmers’ movement. They stressed that if the farm laws are implemented, farming will go into corporate control, government procurement of grains will stop, and that means that food rations also will be scrapped. To save farming and save rations, and demand MSP for all crops and rations for all people, workers must support farmers.

The protesting women warned that if the Modi government does not shed its ego and obstinacy and fails to repeal these ro-corporate black laws soon, there will not only be a Tractor Parade on 26 January on Republic Day but lakhs of women across the country will also launch a campaign to expose BJP-RSS in every city, town, village, mohalla and house.

At Kolkata, a massive dharna of women was organised at Dharamtala by the farmers’ struggle platform AIKSCC, to which AIPWA contributed a large contingent.

At Patna, women’s groups together held a march against the farm laws.